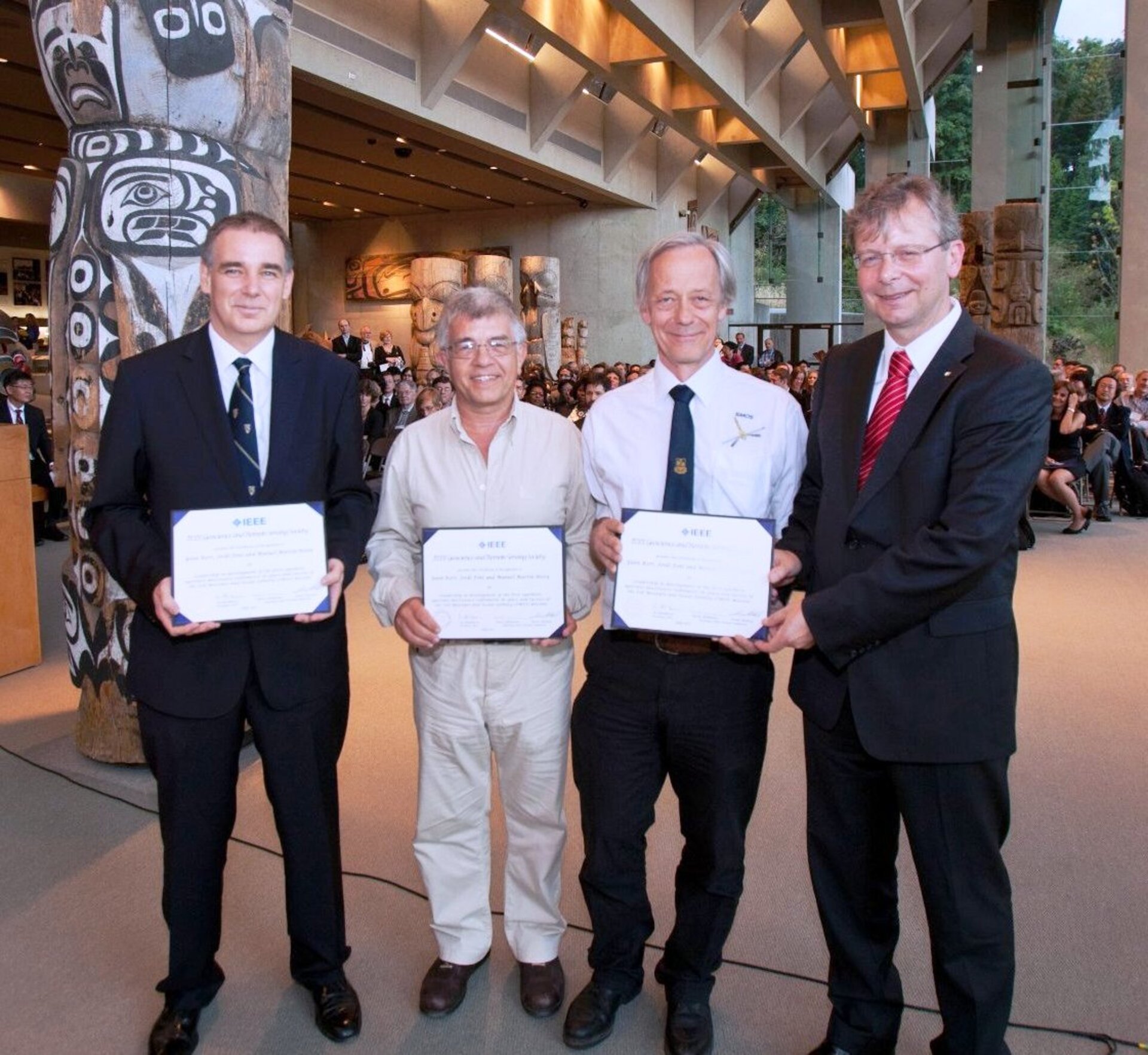 Members of the driving force behind ESA's SMOS mission have been awarded the prestigious Certificate of Recognition by the IEEE Geoscience and Remote Sensing Society for their leadership in developing the first synthetic aperture microwave radiometer in space and for the success of the mission.

The Geoscience and Remote Sensing Society awards certificates of this kind only every two to three years, and only when a significant achievement is recognised by the society's Administrative Committee.

This sought-after award was presented to Yann Kerr from the French Center for the Study of the Biosphere from Space, Jordi Font from the Spanish Institute of Marine Sciences and ESA's Manuel Martin-Neira.

In orbit since 2009, the Soil Moisture and Ocean Salinity (SMOS) mission is using novel techniques to provide global maps of the moisture held in the top layers of soil and salt in the surface waters of the oceans.

This information is leading to a better understanding of the water cycle and, in particular, the exchange processes between Earth's surface and the atmosphere.

The original proposal for a mission to measure soil moisture and ocean salinity came from Dr Kerr. As Lead Investigator for the SMOS mission, he has been involved with the mission from its very conception in 1992. He is also responsible for ensuring that the mission meets the needs of the scientific community, in particular for soil moisture.

As Co-Lead Investigator, Dr Font has also played a fundamental role in ensuring the integrity of the mission is maintained for data on ocean salinity.

From the outset, it was clear to Dr Kerr that only passive microwave operating at L-band would provide the measurements needed by the scientific community.

Since a huge antenna would normally have been necessary to achieve the spatial resolution to observe soil moisture and ocean salinity in this band, the design of the instrumentation posed significant challenges.

The task of coming up with a system that would work fell to Dr Martin-Neira and his colleagues.

It took more than 10 years of research and development, but he overcame the problem by cleverly synthesising the antenna aperture through a multitude of small antennas.

The result was the innovative Microwave Imaging Radiometer using Aperture Synthesis (MIRAS) instrument, which has been operating on the SMOS satellite since it was launched in 2009.

MIRAS captures snapshots of 'brightness temperature' that correspond to microwave radiation emitted from Earth's surface, which can then be related to values of soil moisture and ocean salinity.

At the award ceremony, which took place at the Museum of Anthropology of Vancouver, Canada, on 28 July at this year's International Geoscience and Remote Sensing Symposium, Dr Kerr said, "I am very pleased and honoured to receive this award along with Manuel and Jordi.

"The success of SMOS is, of course, also down to the teams from ESA, CNES, industry and science who made it all possible.

"Now we are using the data to further our understanding of the water cycle and how Earth works and this is thanks to all those involved in this special mission."

Dr Martin-Neira added," On behalf of my colleagues Yann and Jordi, and all the people who have been involved in the instrument development and in the SMOS project, I would like to express my deepest gratitude to the Administrative Committee of the IEEE Geoscience and Remote Sensing Society for the honour of this award."