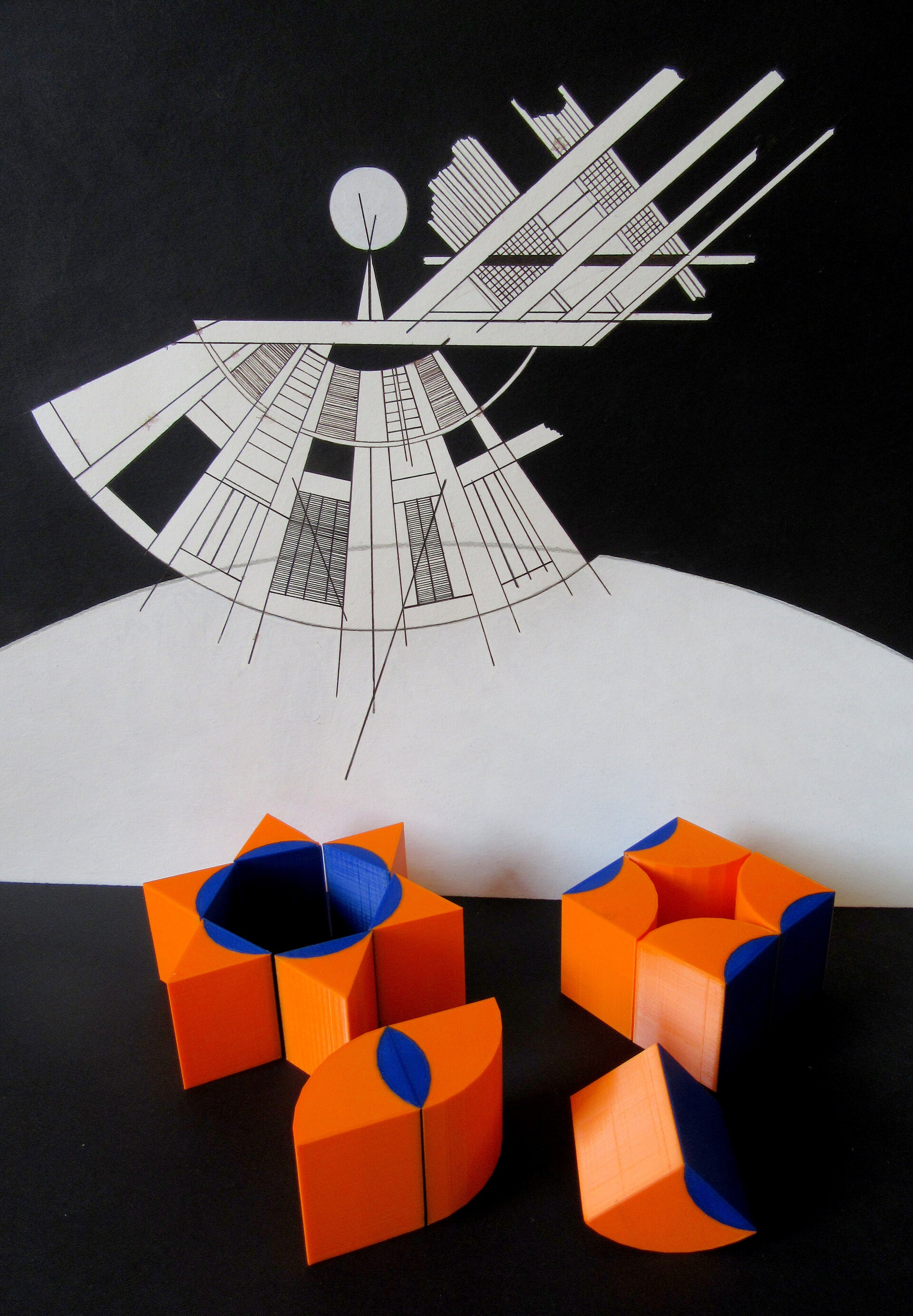 ESA asked the public a question: what would you ask to have 3D printed, to make a future lunar base seem like home? The winning idea came from an artist with a longstanding fascination with the Moon, whose work forms part of the Ely Cathedral Science Festival in the UK.

To counteract monotonous grey moonscapes, visual artist Helen Schell proposed 3D printing a ‘magic Moon garden’, made up of colourful, interchangeable plastic parts that could be arranged over time to mimic the growth of living plants.

Her winning idea has now been produced by BeeVeryCreative in Portugal, part of the URBAN consortium of companies overseeing ESA’s ‘Conceiving a Lunar Base Using 3D Printing Technologies’ project. 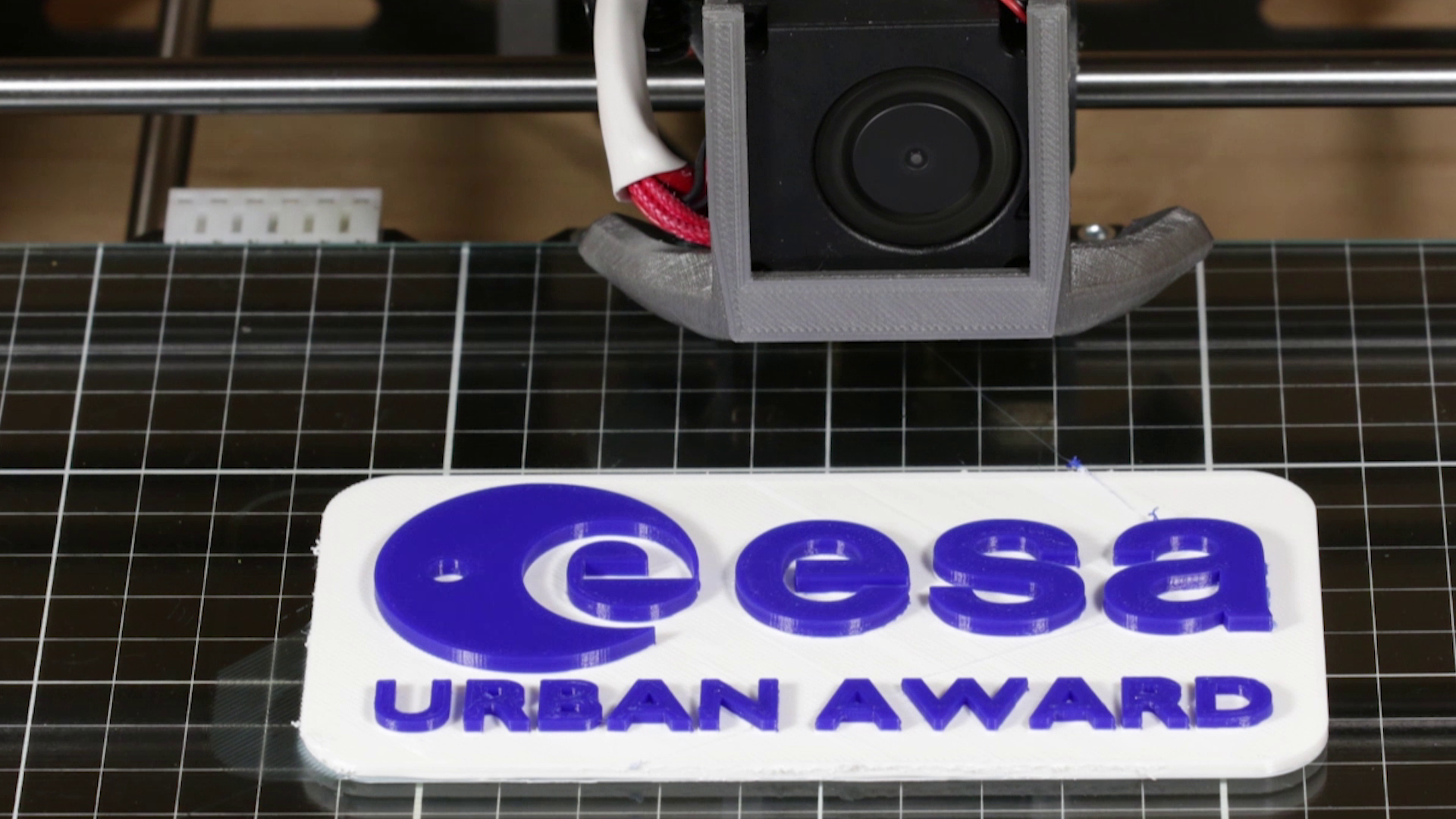 “This is a prototype,” explains Helen, “Which came of thinking how people would miss the stimulus of living plants in the lunar environment, with their colours, scents and ever-changing appearance.

“The operational version would be multi-coloured with embedded smells and actually play a role in freshening the air – just like living plants – and ideally be produced from recycled plastic. But the company have done their best to implement my idea with the technology available.”

Helen’s winning entry was only the latest result of her ongoing interest in Earth’s natural satellite. Starting this Saturday, large-scale examples of her artistic work will go on show in the spectacular medieval interior of Ely Cathedral in Cambridgeshire, UK.

“My focus on the Moon really began in about 2011, when I was undertaking an artistic residency at Durham University,” Helen recalls. “Cosmologists were explaining that all the really interesting stuff was far away in deep space, but then it occurred to me that the Moon is just there shining down at night but at that point I knew next to nothing about it. So I started finding out.

“I’m of the age that walking on the Moon seemed like something everybody would get to do at some point, and everyone is surprised we haven’t been back since.

“But since my interest began, when I seemed like the only person talking about it, interest in the Moon has really rekindled with remarkable speed, with ESA’s idea of the Moon Village and the international Lunar Gateway station.

“My lunar work takes the form of an ongoing project at ‘Moon-Shot: Woman on the Moon’ – something I think has to happen. It includes large scale paintings of the full Moon, a lunar station, radio telescope and a 10.5-m high Moon rocket, as well as Moon-themed clothing, all of which are about to go on show at Ely Cathedral.”

Her work incorporates optical effects and illusions, mimicking the quirks of lunar conditions she has researched through reading and quizzing lunar experts and astronauts. For instance her clothes incorporate fluorescence and reflective materials, so they look different when photographed from being observed with the naked eye. For these Helen took inspiration from the shiny natural glass left in lunar dust by meteorite impacts.

Based in the northeast of England, Helen has performed numerous educational outreach projects, and served as a space ambassador for UK ESA astronaut Tim Peake’s mission to the International Space Station as part of ESA’s European Space Education Resource Office (ESERO) project.

“I’ve done many drop-in events with children, and we’re having one as part of the Ely Cathedral Science Festival on 20 May,” says Helen. “Children can create their own lunar rovers and houses on a tin-foil lunar surface, designing their own Moon settlement.”

A forthcoming exhibit at the UK Science Museum will feature an image of Helen’s magic Moon garden as well as further information on ESA’s lunar 3D printing research.

The under 18 category in ESA’s lunar 3D printing competition was won by Judith de Santiago, a 17-year-old student from Madrid, Spain, who presented a 12-sided plant pot – ideally for a real plant – that incorporates symbols of Earth.