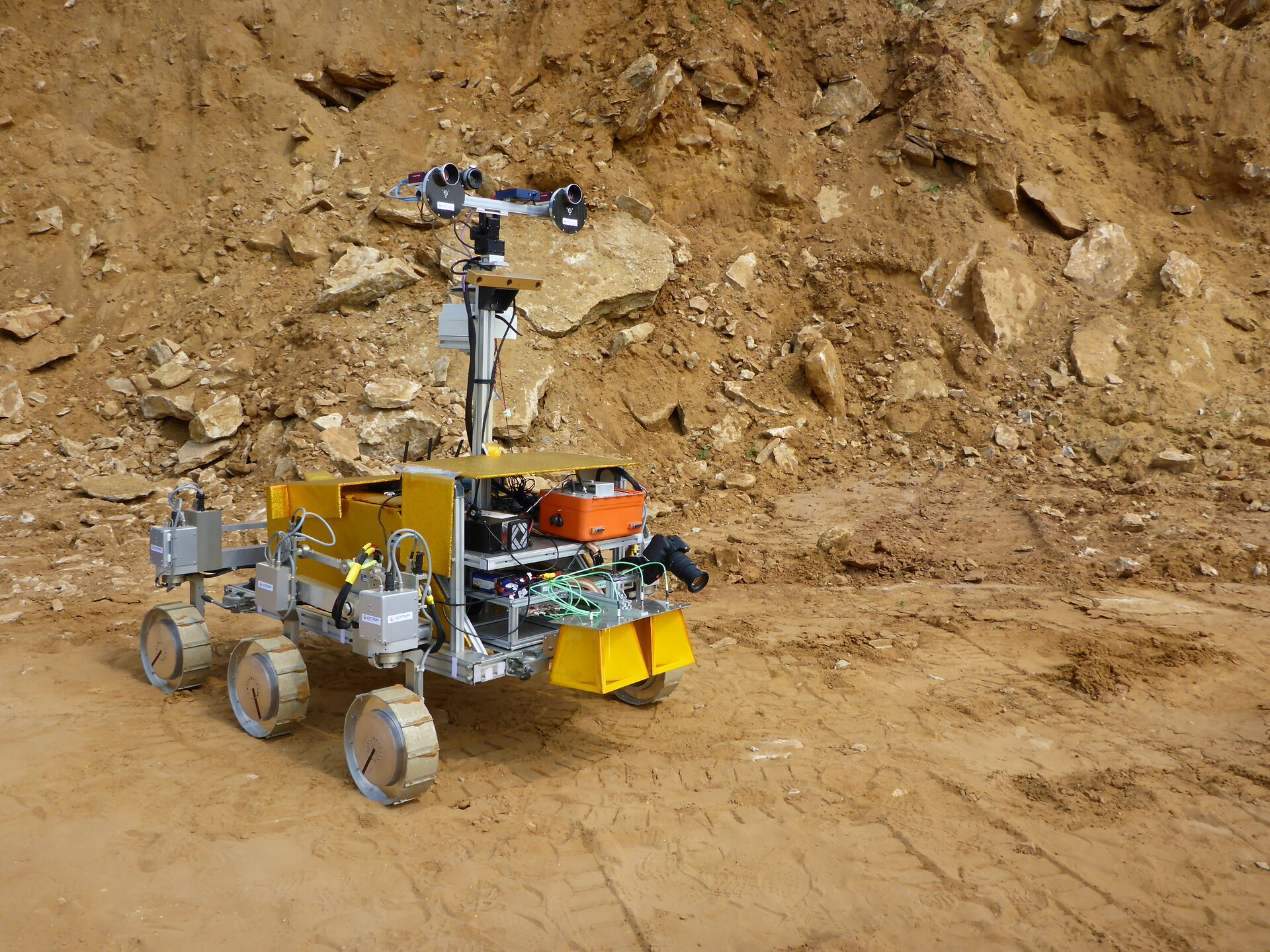 Next week will see ESA’s most ambitious planetary rover test yet. Robotic exploration of a Mars-like desert in South America will be overseen from the UK, providing experience for future missions to the Red Planet.

The rover faces the desolate Atacama Desert in northern Chile, one of the closest terrestrial matches for Mars. Among the driest places on Earth, it lacks any vegetation and its red–brown soil and rocks make it look even more like Mars.

The aim is to build up experience in operating rovers on a planet, which requires a very different way of working from a satellite mission.

For added pressure on the rover’s remote overseers – based at the Satellite Applications Catapult facility in Harwell, UK, next to ESA’s European Centre for Space Applications and Telecommunications – each day of the five-day  test will be treated as equivalent to two Mars days, or ‘sols’.

For each sol they will first downlink data then prepare a set of commands for the next sol that the rover will then carry out on its own.

The trial is intended to develop technologies and expertise for future Mars missions in general, but for added realism it is using ESA’s 2018 ExoMars rover as its ‘reference mission’.

An early prototype of the six-wheeled ExoMars rover will be put through its paces, fitted with prototypes of three of its scientific instruments: a panoramic camera for stereo 3D imaging, a ground-penetrating radar to probe subsurface geology, and a close-up imager for studying subsurface samples to a resolution of a thousandth of a millimetre.

These three instruments will work together to select a sample site with outcrops of bedrock beside looser material. A human-operated hand drill will gather underground samples for the rover to examine – although this human intervention will remain invisible to the remote operators.

“This field trial is about optimising the use of typical instruments and equipment aboard a Mars rover and generating a set of commands for the rover to execute the following day,” explains Michel van Winnendael, overseeing the Sample Acquisition Field Experiment with a Rover, or SAFER, project for ESA.

“Unlike satellites, planetary rovers operate in close interaction with the topography and physical properties of the planetary surface.

“This implies limited data return from the rover during relatively short communication windows, with an inherent time delay.”

Jorge Vago, ExoMars project scientist, adds, “For the first time with SAFER we will attempt to integrate data from surface and subsurface instruments to explore how to transition from topsoil to underground operations.”

“Since drilling plays an important role in the ExoMars rover’s search-for-life strategy, this is an important step. On Mars the best chances of accessing well-preserved molecular biosignatures deposited during the planet’s early, water-rich history lie in the subsurface, at depths below 1 m, where the topsoil provides shielding from cosmic radiation damage.”

The precise test location will be chosen on Sunday 6 October, based on information from local reconnaissance trips made this week by part of the team. Images of the site taken from an unmanned aerial vehicle to simulate the overview from a Mars orbiter will be sent to the remote operators.

“Since this is a rehearsal of a planetary exploration scenario there is an inevitable degree of uncertainty in the sequence of events,” adds Michel.

“Nature is very inventive in presenting situations which were not fully anticipated by those who conceived the mission. That’s why we find it important to do field tests in a fairly representative environment.”

The industrial team performing the testing for ESA is led by the UK Science & Technology Facilities Council’s RAL Space at the Rutherford Appleton Laboratory, with subcontractors including Astrium, Aberystwyth University, Joanneum Research in Austria, Space Exploration Institute in Switzerland and SCISYS, with additional support from the Mullard Space Science Laboratory of University College London, the University of Leicester and the LATMOS research lab of the Centre National de la Recherche Scientifique, France.

The SAFER team in Chile will be accommodated beside the Very Large Telescope on nearby Mount Paranal, as guests of the European Southern Observatory.