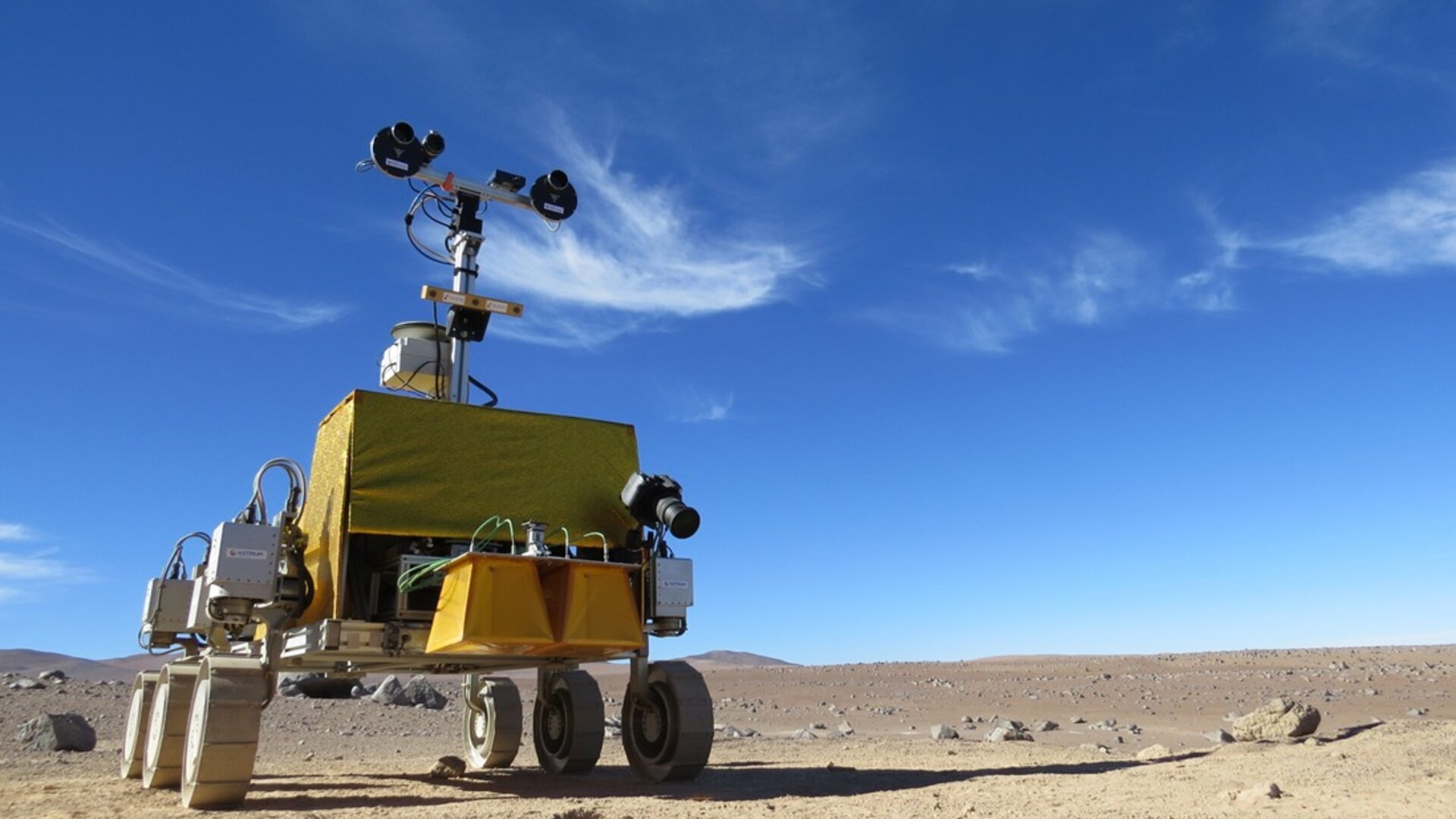 An early version of ESA’s 2018 ExoMars rover fitted with a trio of prototype ExoMars instruments was overseen from a remote control centre at the Satellite Applications Catapult facility in Harwell, UK.

The controllers sat in front of a large video wall, combining data from the rover’s instruments with their own 3D planning maps.

Over the course of six simulated martian days, they reviewed rover data to select new targets or trajectories for subsequent investigation.

“SAFER’s purpose is really to build up experience in rover field testing, so the remote team worked as realistically as possible,” explains Michel van Winnendael, overseeing the testing for ESA. 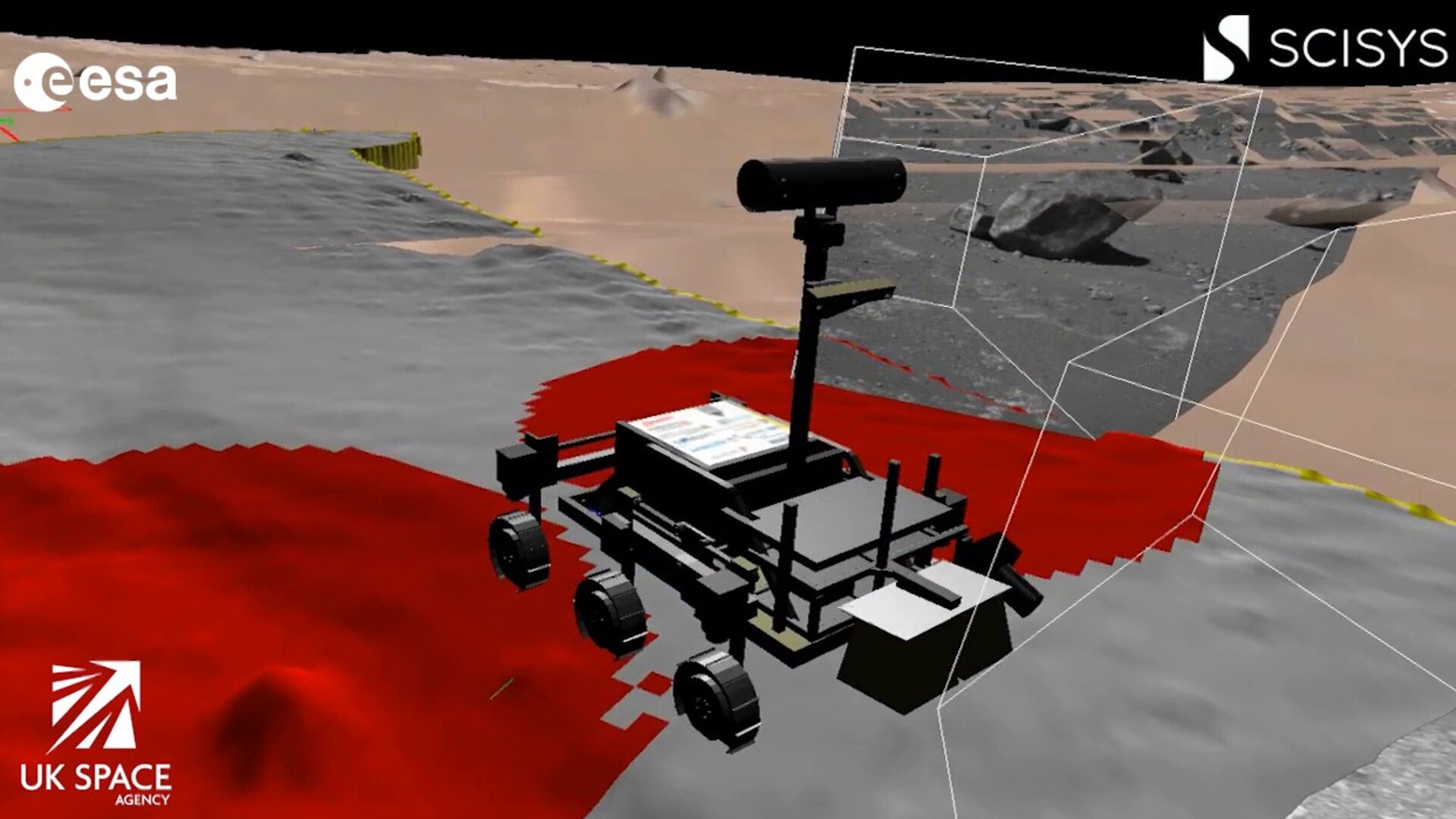 “They had to plan good observation points for the instruments and safe paths for navigation. Once a plan was prepared it was dispatched to the local team in the field who then forwarded it to the rover, while trying to remain as ‘invisible’ as possible for the remote operators.”

This extended to brushing away tyre tracks and their own footprints with a broom, so as not to give the remote control centre any inadvertent positioning clues.

The ExoMars rover was used as the ‘reference mission’ for the trial, helping to maximise the level of realism.

Just as the actual rover will do on Mars, the test rover – supplied by Astrium in Stevenage, UK and dubbed ‘Bridget’ – hosted a panoramic camera, close-up imager resembling a geologist’s lens and ground-penetrating radar to identify promising sites for subsurface excavation.

The one item the rover lacked was a working drill, so whenever the control centre ordered an excavation the local team stepped in to manually dig the site. This obtained samples for ‘ground truth’ – checking that the radar analysis was accurate as well as enabling close-up analysis.

“At our second simulated drill location the field team found a layer of rock starting at a depth of 60 cm,” remarks Sev Gunes-Lasnet, project manager for RAL Space. “This comes close to the kind of features the team was looking for: analogues for locations on Mars which could hold traces of past or present life.”

A valuable element of the field trial was its unpredictability: high desert winds and a close encounter with a dust devil led the local ream to shelter their control centre behind a huddle of cars, although the rover itself was untroubled.

A flat rock that was suddenly flipped by the passage of Bridget’s front wheel was another unexpected problem – useful food for thought for rover designers and operators.

“Both the remote and field team members are now looking forward to seeing how things went ‘at the other side’,” concludes Michel. “Analysis will continue in the coming weeks.”

On Saturday evening the rover made one final trip, prior to being boxed up for its return to the UK.

As a thank you to the European Southern Observatory on Mount Paranal, which played host to the SAFER team, Bridget was brought up to the mountain to meet its staff.

They were able to see the rover on the move, and given the chance to teleoperate it for themselves.

The SAFER field trial was overseen by ESA’s Directorate of Technical and Quality Management, with its international industrial team led by the UK Science and Technology Facilities Council’s RAL Space. The activity is funded by ESA’s Basic Technology Research Programme, with additional co-funding from the UK Space Agency.

To get more details of SAFER, visit the team at http://safertrial.wordpress.com .