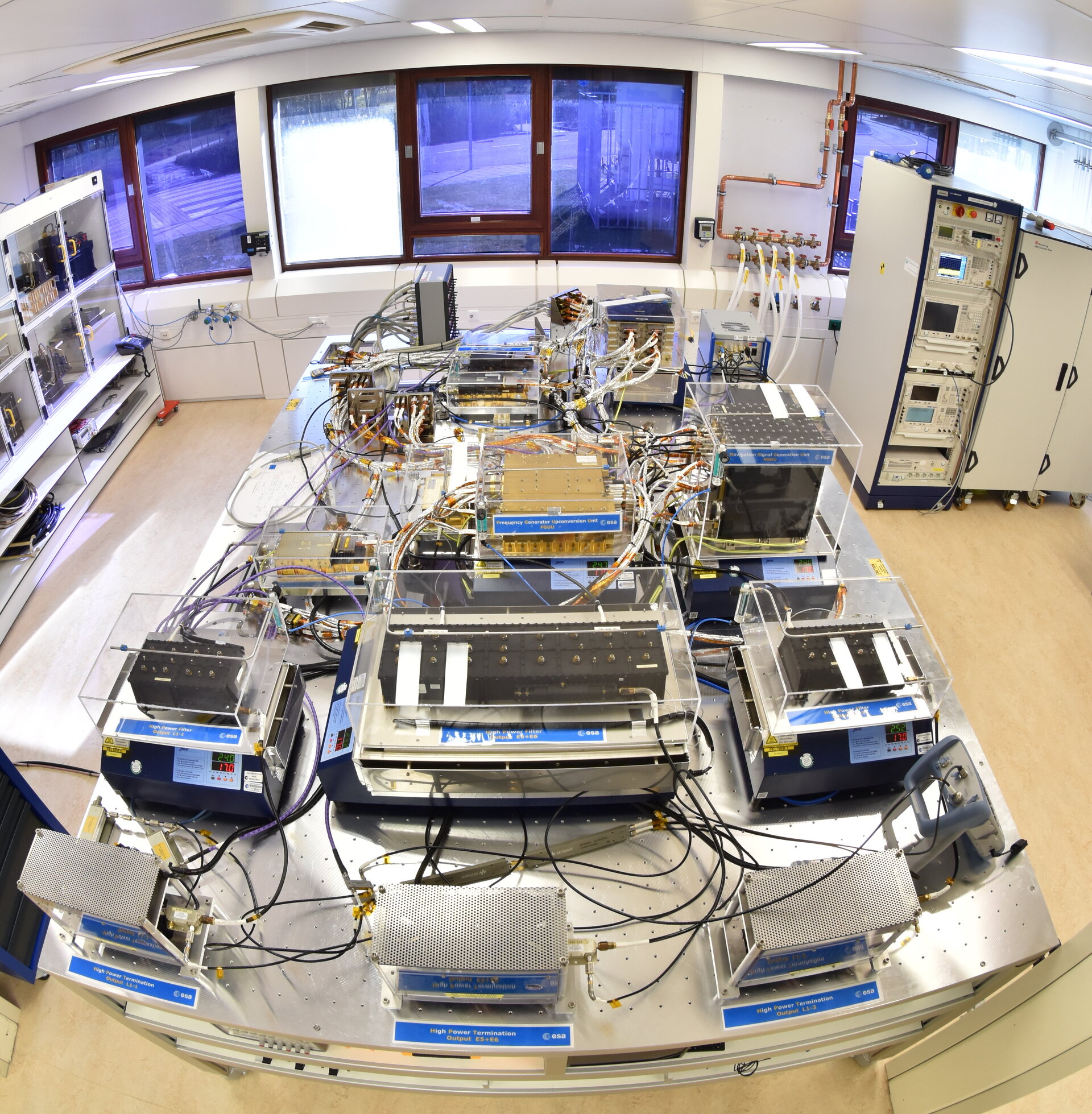 Europe has 26 Galileo navigation satellites in orbit, blanketing the world in positioning signals, with another 12 planned for launch, variously taking shape or undergoing testing in facilities across our continent. Then there is one more satellite, operating as if it were in space but actually turned inside out on the ground, inside a laboratory within ESA’s technical heart.

A complete Galileo satellite was taken apart and its navigation payload reassembled on a test bench, then used to investigate the lifetime performance of its component parts, recreate satellite anomalies, and test candidate technologies for Galileo’s future evolution.

Formally known as the ‘Galileo IOV Engineering Model Payload Testbed Facility’, this satellite payload is located in the cleanroom environment of ESA’s Microwave Lab, at its ESTEC technical centre in the Netherlands.

Last year the facility underwent full radio frequency characterisation testing, confirming the navigation payload is performing as expected, as if in orbit, including the generation of the three Galileo navigation signals, known as E1, E5 and E6.

This leaves the way clear for using it to test technologies for the coming Galileo Second Generation design set to fly later this decade, including plugging in a novel Navigation Signal Generation Unit (NSGU) and new ensemble of atomic clocks.

Work on the facility started back in 2016, with the receipt of a complete first-generation Galileo In-Orbit Validation satellite, as well as associated equipment filling 42 heavy goods trucks.

“This spare Galileo engineering model was never intended to fly, but built instead by Thales Alenia Space in Italy as a test item on the ground,” comments microwave engineer César Miquel España.

“The European Commission, Galileo’s owner, were looking for a new use for the satellite, and we proposed turning it into a testbed to assist the Galileo programme going forward – our Lab had already created one for the GIOVE satellites, Galileo’s predecessor.”

The satellite was taken apart, then the key modules of its navigation system were recovered – including the atomic clocks, solid state power amplifer, NSGU and frequency generator and upconverter unit –along with the maze of electrical harness cabling connecting them together.

The next step was to put them together again on a flat table, adds technician Gearóid Loughnane: “The payload and harness were designed for a cubic structure, rather than a flat table, so this was far from easy. In parallel we worked with the original vendors of the units, which at this stage were more than 15 years old, to source the operating software we’d need to get them working again.”

The one payload element that is not included is the satellite antenna. Instead the facility’s signals are run through a dedicated attenuation chain to modify them as if they are being picked up by receivers on the ground.

To make the facility more representative of the second-generation Galileo Full Operational Capability satellites that form the majority of the constellation in orbit, an additional NSGU (from Thales Alenia Space in Italy) was added to the initial RUAG-made version.

All three Galileo navigation signals can be generated, and a fully representative range of telemetry reproduced. In addition, all the units can be separately temperature controlled, down to a single degree.

“This is important because part of the facility’s job is to recreate anomalies occurring aboard the satellites, which includes reproducing their environment,” adds César.

“The facility also allows the investigation and evaluation of end-to-end navigation signal performance of new satnav payload and equipment concepts.”