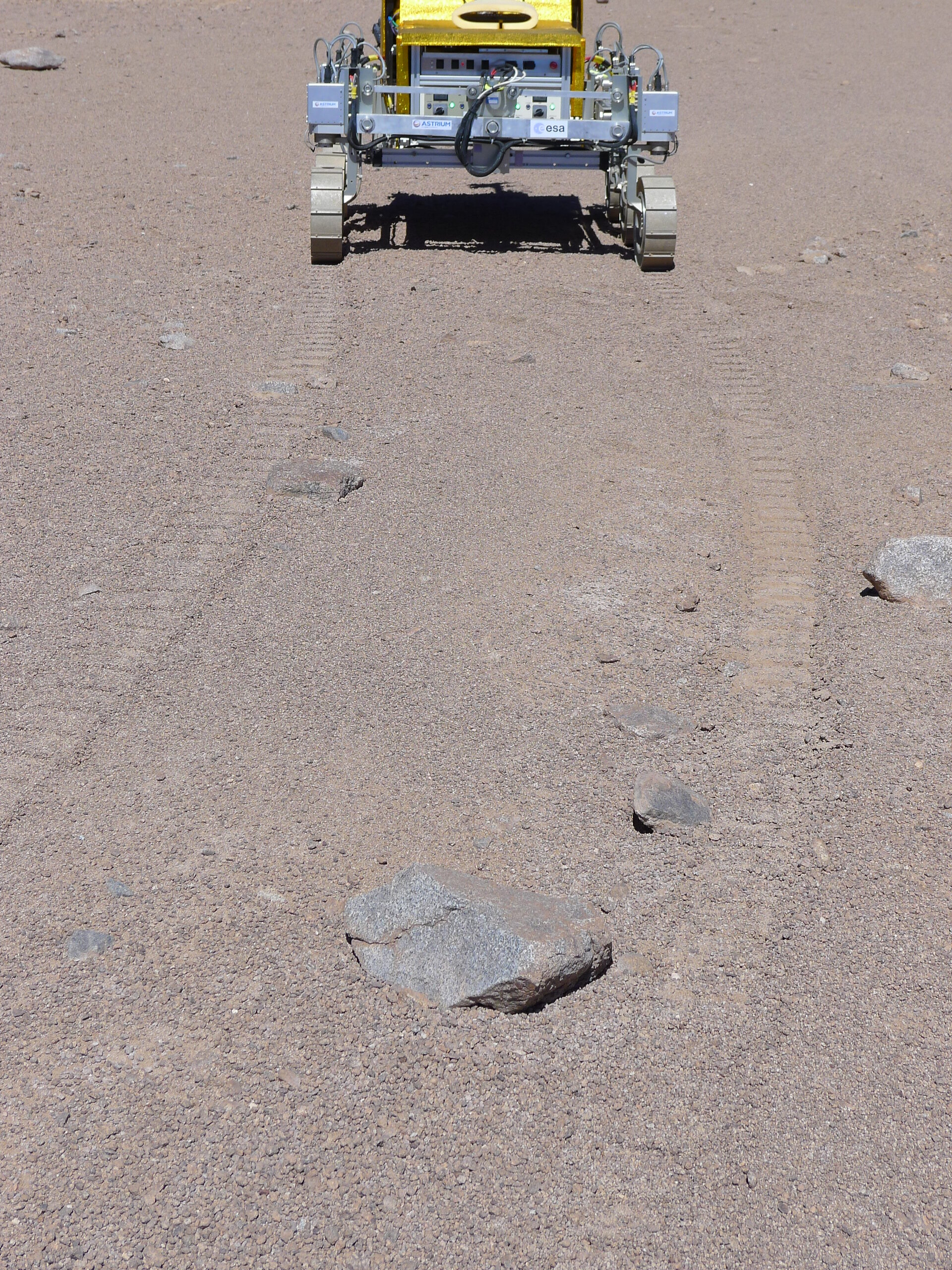 ESA’s test rover has been fitted with scientific instruments  and made its first tracks in the sands of Chile’s Atacama Desert. Meanwhile, team members have explored the area to select a suitable site for testing, flying a drone to produce an aerial map.

ESA has assembled an international industrial team for the trial, which takes place in the Mars-like Atacama, one of the driest places on Earth.

“During the past few days we have been busy preparing for the actual trial,” explains Michel van Winnendael, overseeing the testing for ESA. “A number of sites have been visited, based on guidance provided by Chilean geologist Prof. Guillermo Chong.

“Our team geologist Derek Pullan of the University of Leicester has been exploring the area looking for similar sites to the kind of martian locations we would employ the same instruments on. The local team settled on a consensus choice – which we have christened ‘SAFER Valley’.

“Then on Sunday night a digital elevation map, acquired in the field by an overflying drone to simulate orbital imagery of the rover’s surroundings, was sent to the Remote Control Centre at the Satellite Applications Catapult facility in Harwell, UK.”

The scientific instruments used in the trial are designed to help search for the best location to drill down to collect subsurface samples on Mars. Sheltered from surface radiation and harsh oxidising chemicals, such samples may contain signs of past or present life.

ESA’s 2018 ExoMars mission is acting as the ‘reference mission’ for the trial. The rover vehicle used for the trial, called ‘Bridget’, is provided by Astrium Stevenage in the UK.

On Tuesday morning a trio of prototype ExoMars rover instruments was fitted to Bridget. The panoramic camera provides stereo 3D terrain imagery, the close-up camera works like a geologist’s hand-lens for high-resolution imaging, and the radar peers through soil for a detailed 3D view of the shallow subsurface beneath the rover.

On Monday evening, before the rover had been deployed in the field, panoramic images were sent to the control centre. Looking at them along with a digital elevation map, the remote control team had to make their first decision on the path to be taken by the rover the following day.

“The next morning, once the instruments were installed, this route was uploaded to the rover,” adds Michel. “It then began its first exploration, with some debugging and manual interventions needed along the way.

“Nevertheless, after a long working day that lasted until sunset, the data collected by the instruments were sent back to the control centre.”

The SAFER field trial is being overseen by ESA’s Directorate of Technical and Quality Management, with its international industrial team led by the UK Science and Technology Facilities Council's RAL Space. The activity is being funded by ESA’s Basic Technology Research Programme, with additional co-funding from the UK Space Agency.

To follow SAFER’s daily progress, visit the team at http://safertrial.wordpress.com .