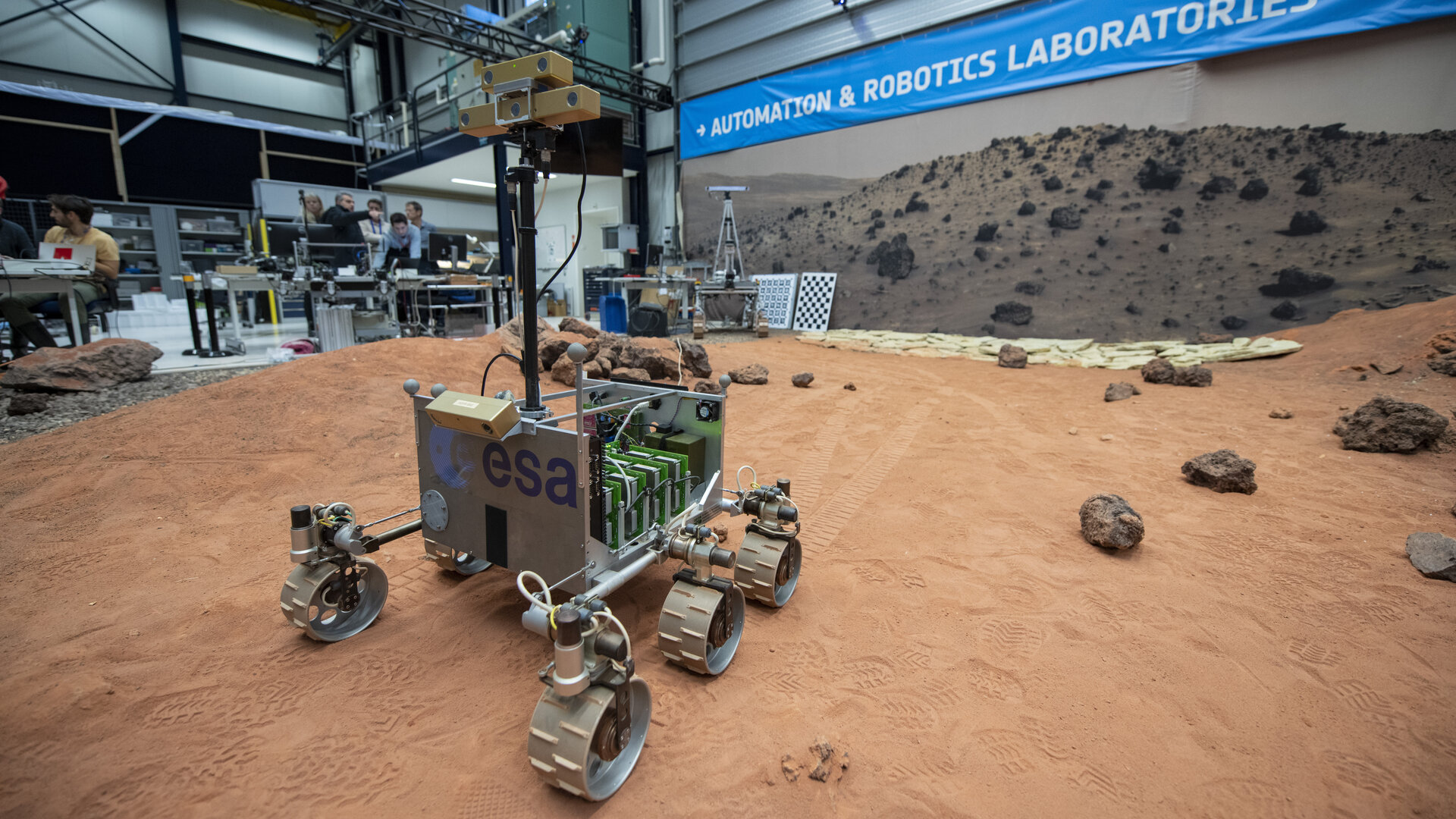 Navigation software destined for the ExoMars 2020 mission to the Red Planet has passed a rover-based driving test at ESA’s ‘Mars Yard’.

ESA’s ExoMars rover will drive to multiple locations and drill down to two metres below the surface of Mars in search of clues for past life preserved underground.

A half-scale version of the ExoMars rover, called ExoMars Testing Rover (ExoTeR), manoeuvred itself carefully through the red rocks and sand of the 9 x 9 m ‘Planetary Utilisation Testbed’, nicknamed the Mars Yard, part of ESA’s Planetary Robotics Laboratory at ESTEC in the Netherlands. 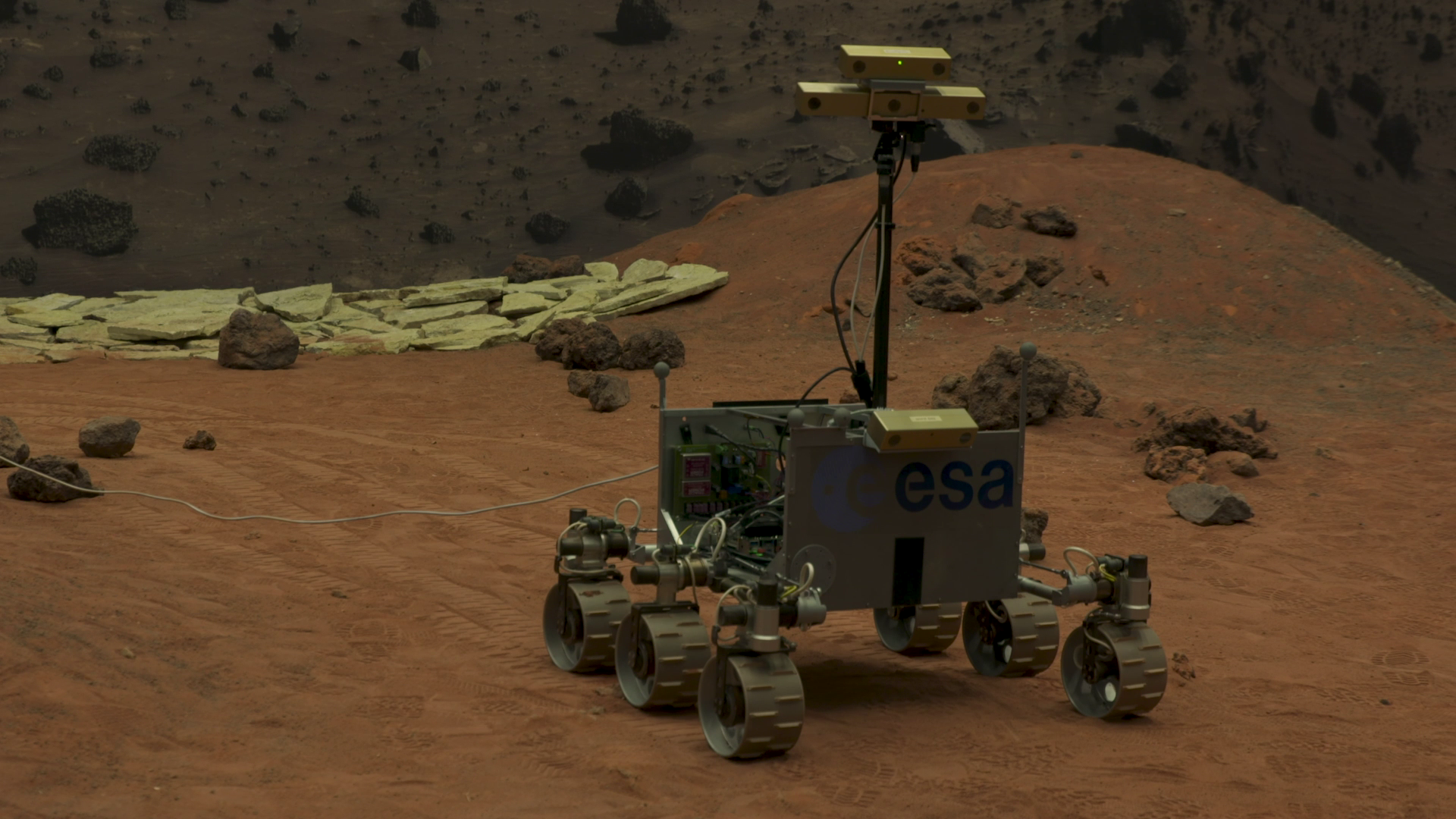 Carefully calculating its onward route, ExoTeR progressed at a rate of 2 m per minute – still several times faster than the actual ExoMars rover will drive, which will progress at 100 m per martian day.

The two-day rover test was conducted by ESA robotic engineers, joined by a team from France’s space agency CNES in Toulouse. They have more than two decades of experience in autonomous navigation for planetary rovers, culminating in developing the ‘AutoNav’ suite of software that was doing the driving.

During 2017 ExoTeR was passed to ALTEC in Italy, the site of ExoMars’s rover monitoring and control centre, to allow the control team to train with the advanced rover. In December, the rover returned to ESTEC for an upgrade to its autonomous navigation algorithm.

The navigation test followed, confirming the software was functioning well. Next ExoTeR will return to Italy, permitting the ALTEC control team to gain experience working with the added functionality of autonomous navigation.

The enormous distance from Earth to Mars equals a signal delay of between four and 24 minutes, making direct control of ExoMars impractical. Instead the rover will be capable of making some of its own decisions.

“Rather than sending complete hazard-free trajectories for the rover to follow, autonomous navigation allows us to send it only a target point,” explains ESA robotics engineer Luc Joudrier.

“The rover creates a digital map of its vicinity and calculates how best to reach that target point. Looking at the map it tries to place the rover in all these adjacent locations to work out if the rover would be safe in every one of these positions – or if the rocks are too high or terrain too steep.

“Working from the local navigation map, the rover computes the safe path toward the goal and begins to move along a segment of the calculated path, at the end of the segment it repeats the same mapping process to progress.

“It is similar to a human walking. We look ahead to decide where we are going but as we walk we peer down at our feet and if necessary change course to avoid obstacles. Once we have chosen a path without obstacles, we make sure we follow that path to remain safe.”

The ExoTeR rover, like the ExoMars rover itself, is equipped with mast-mounted stereo navigation cameras for digital elevation mapping. And as it wheels forward, it constantly checks its onward progress using a pair of cameras in its front chassis.

This vision-based motion tracking works better than simply measuring the turn of the rover’s wheels because it allows controllers to take account of any wheel slippage – rovers on Mars have previously been caught in deep sand, and continued wheel turning might actually dig them in deeper.

The ExoTeR rover, complete with updated software, is now set to return to ALTEC in Italy, allowing the control team to gain experience with the added functionality of autonomous navigation ahead of ExoMars’s flight software being completed.

“The combination should give the rover added flexibility,” says Luc. “The idea is that one might turn out to perform better in more difficult terrain, while the other could move faster along easier ground.”