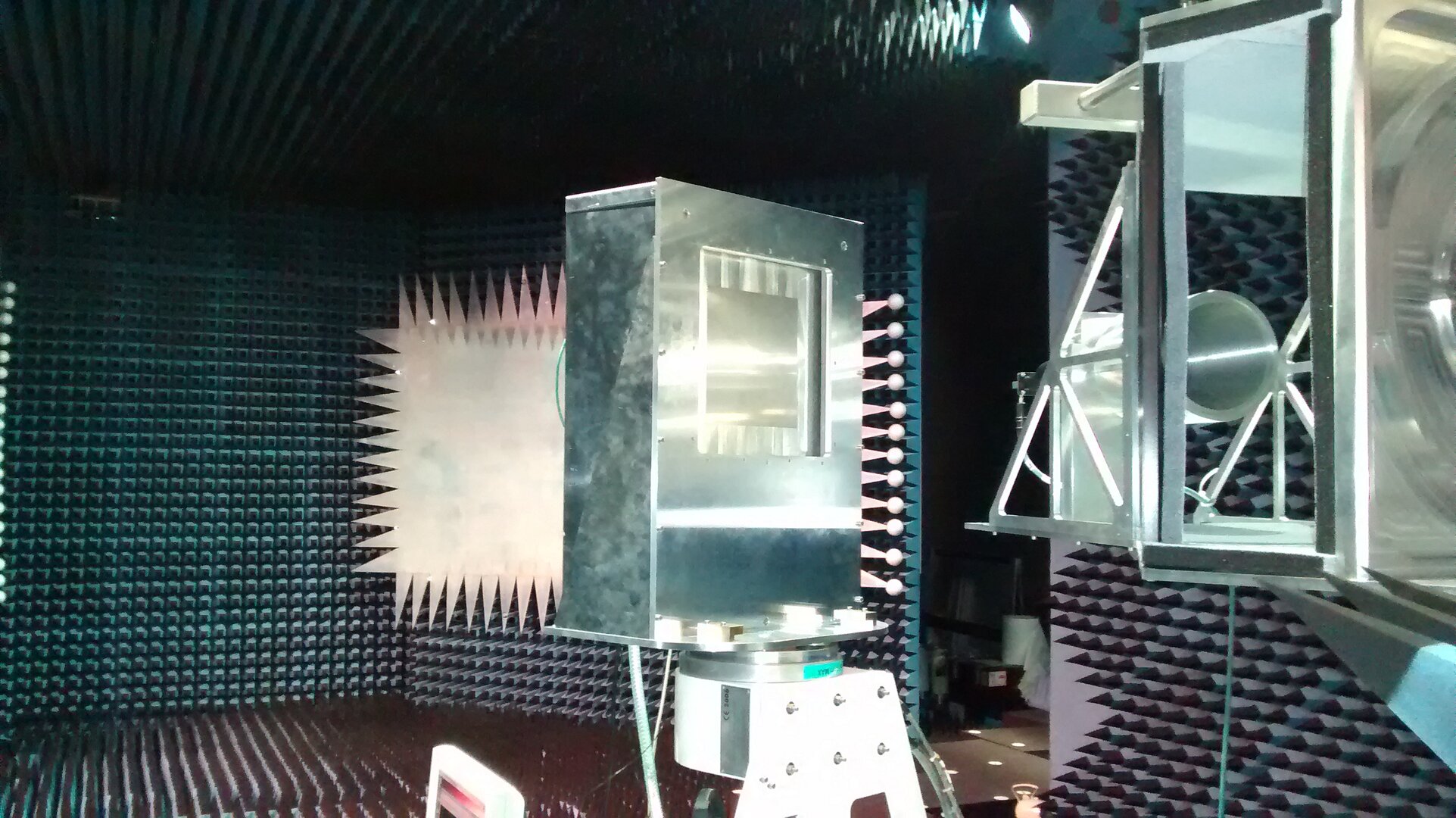 ESA’s Solar Orbiter will perform close-up observations of the Sun while continuously bathed in sunlight. Material testing has been carried out to check the spacecraft antenna can maintain a reliable link to Earth despite the extreme 500°C heat the mission must endure.

Solar Orbiter, due for launch in 2017, will carry a portfolio of instruments to perform high-resolution imaging of our parent star from as a close as 42 million km – a little more than a quarter of the distance to Earth.

Operating in the continuous direct view of the Sun, the mission must endure 13 times the intensity of sunlight at Earth, resulting in temperatures of 500°C or more. At the same time, all of Solar Orbiter’s subsystems must go on operating normally, including its communication subsystem, relaying data back to Earth.

ESA’s Compact Antenna Test Range (CATR), at ESA’s ESTEC technical centre in Noordwijk, the Netherlands, hosted a test campaign to ensure that the proposed coating materials can maintain the necessary radio-frequency reflectivity even as the antenna reflector’s operating temperature increases.

“Because the antenna will be covered with a new type of high-temperature coating, the Solar Orbiter project team asked us to come up with a way of characterising reflectivity loss on the antenna related to temperature,” explained Luis Rolo, overseeing the range.

“The reflector itself will be made of titanium alloy, but with a surface layer called Solar Black, also being applied to other exposed parts of the spacecraft.”

Solar Black, developed by Irish company EnBio, is based on burnt-bone charcoal, favoured for this mission because it can maintain the same ‘thermo-optical’ properties despite years of exposure to unfiltered sunlight and ultraviolet radiation.

The engineers of the ESA Antennas and Submillimetre Waves Section, in charge of the range, found themselves faced with a challenge; normally their radio-frequency material tests take place at ambient conditions. How could they safely reproduce the scorching temperatures prevailing closer to the Sun than the orbit of Mercury?

Antenna engineer Eric Van Der Houwen explains: “We adapted our existing sample holder, lining up an antenna feed horn with a ‘collimating’ mirror to focus our radio signal onto the test plate, while heating the sample in an uniform way, within our existing well-established test procedures.”

To raise its temperature as required, the antenna sample plate was attached by vacuum to a solid 25 kg copper block, which was then warmed using electric heaters. As the sample plate had to stay aligned during temperature cycling, the thermal expansion were compensated for.

This work was done in close cooperation with ESA’s thermal specialists and the ESTEC workshop.

“The coated titanium sample plate then reflects the signal back to instrumentation able to precisely determine any energy loss due to reductions in area reflectivity, down to 0.1%,” Eric added.

“We performed around two full test cycles daily – it took progressively more time to heat up to higher temperatures, taking just two minutes to rise from 50°C to 100°C, for example, but more like 20 minutes to go from 450°C to 500°C.”

For safety, the block was enclosed in insulation and a frame of reflective stainless steel, with safety officers attending throughout the week-long campaign.

“The testing has gone well. The results show that the losses due to the coating are negligible,” Eric concludes. “And this technique can now be added to the test portfolio the CATR can provide to other customers in future.”