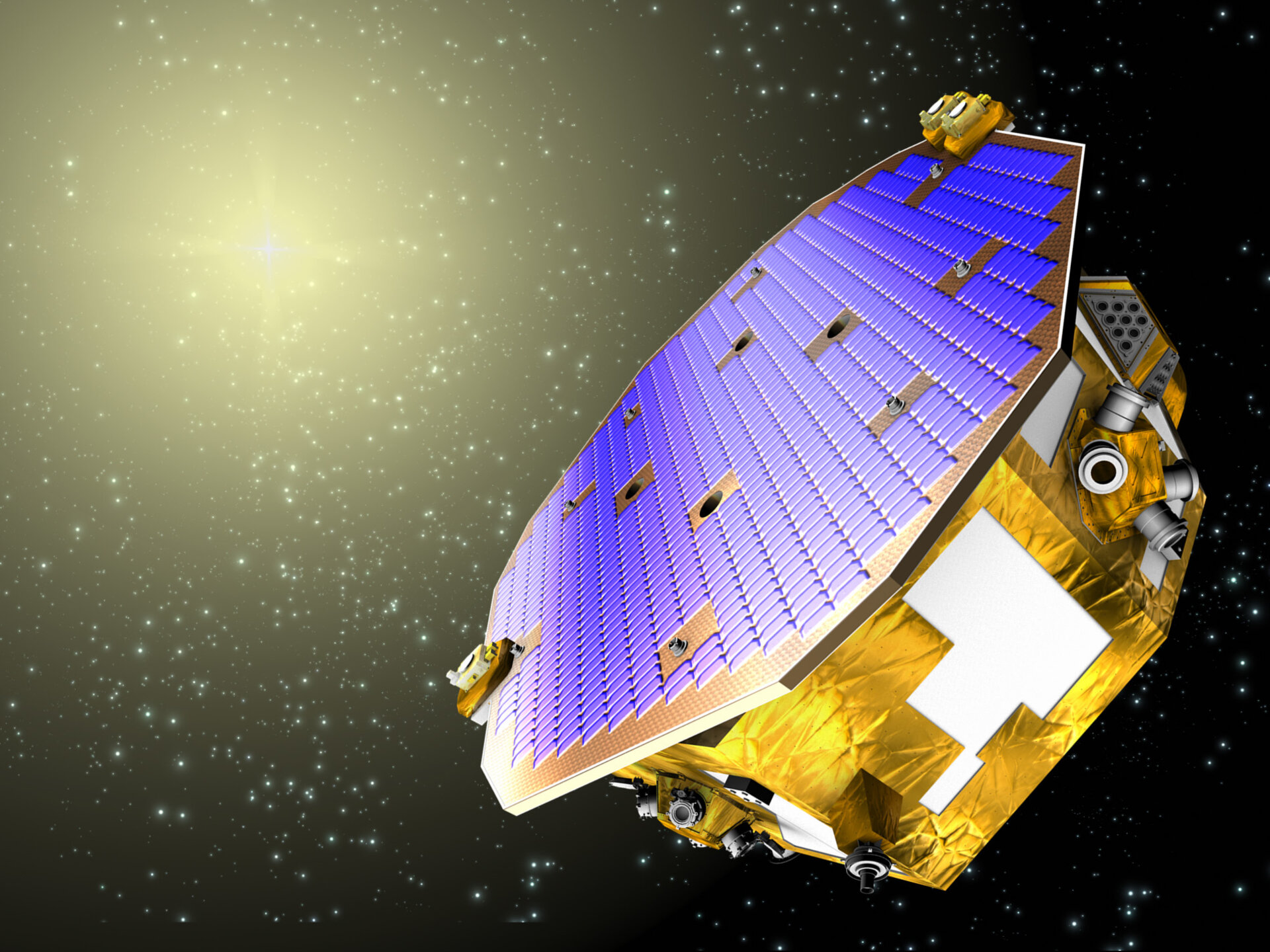 LISA Pathfinder is set to be a spacecraft in a class of its own. Officially designated a technology-development mission, its designers are effectively facing the challenge of bringing one of Albert Einstein’s thought experiments to life.

On his way to developing his 1915 Theory of General Relativity, Einstein wondered how an object would fall through space if it was truly free of all external influences.

The answer, the physicist decided, is that instead of moving along a straight line it would actually trace a slight curve called a ‘geodesic’ - in the same way that airliners follow great circles over Earth’s rounded surface - because gravity warps the underlying structure of space and time.

Later, in one of his famous ‘Gedanken’ or thought experiments, Einstein imagined a way to establish the curvature of spacetime, by exchanging photons of light between two free-falling particles moving along geodesics. If the experiment could be done on a large enough scale – in practice, millions of kilometres – any variation of curvature would have a measurable effect on the light’s frequency.

This would be a way of detecting one particularly dramatic prediction of Einstein’s General Relativity theory: proposed spacetime ripples known as ‘gravitational waves’, emanating from exotic astronomical objects such as colliding black holes and compact binary star systems.

In mid-2013, two years shy of General Relativity’s hundredth birthday, LISA Pathfinder will be performing the first part of this experiment for real, though within the much tinier scale of a single spacecraft.

The aim for this mission is simply to test to unprecedented accuracy the underlying assumption of Einstein’s thought experiment: that free-falling objects do indeed follow geodesic lines through space.

The difficulty in carrying out this deceptively simple experiment comes in the need to bring all outside forces acting on the free-falling bodies down to the bare minimum.

This list of perturbations to avoid includes the internal gravitational pull from the spacecraft structure, the slight but tangible push of sunlight itself – ‘solar radiation pressure’ – as well as any slight vibration or residual magnetic influences which might otherwise emanate from the body of the spacecraft hosting the experiment.

LISA Pathfinder will minimise the effects of external perturbations by operating 1.5 km million away from its homeworld, going into orbit around Lagrange Point 1 (L1). There is no simple fix to overcome the other forces on the list, however – only rigorous engineering will do. The mission will have to be the most precisely controlled spacecraft ever built – or set of spacecraft, to be more precise.

The truth is that LISA Pathfinder can actually be considered as a formation-flying mission – except two tiny spacecraft will actually be flying inside a third. Two 4.6-cm-cubed ‘test masses’ will float freely within a pair of chambers 35 cm apart in the heart of the main spacecraft. Their relative positions will be tracked by a laser measuring system operating down to atomic scales of accuracy.

“We are seeking to keep the geodesic motion of our test masses as pure as possible,” explained Bengt Johlander, Payload Engineer for LISA Pathfinder.

“The masses are free to move – and if our experiment is set up correctly they should move together in concert – while the surrounding spacecraft is guided by their motion to follow in the same direction. It is impossible to have zero perturbations, but we have fixed a precise budget for disturbances we will stay within.”

Preparing the way for LISA

The purpose is less to create geodesic motion for its own sake than to flight-test technologies and techniques for an even more ambitious mission: putting the LISA into LISA Pathfinder. Planned for later this decade, the Laser Interferometer Space Antenna mission will be a much more complete recreation of Einstein’s gedanken: a joint effort between ESA and NASA to search for gravitational waves in the way Einstein outlined.

LISA’s trio of spacecraft will fly five million km apart, but remain linked via laser beams to detect even the slightest change in position between them.

Using the same principle of far-distant reflective surfaces linked by laser, several gravitational wave observatories have been built on the ground, but no detections have been made so far. But Earth’s seismic noise disturbs these detectors over seconds-long timescales, a fact that limits them to looking for higher-frequency gravitational waves from smaller astronomical objects, such as neutron stars and small black holes.

However, deep space opens a new window to the low-frequency gravitational wave spectrum with which LISA will observe, among other phenomena, the most powerful events in the Universe: the collision and merger of super-massive black holes.

“LISA Pathfinder is far too small in scale to be able to detect gravitational waves itself, but it will prove the feasibility of the cutting-edge technology needed to make LISA a reality,” added Johlander.

“Although in practice LISA’s performance will need to be even tighter than its predecessor in order to succeed.”

Underlining its testbed character, LISA Pathfinder was originally designated ‘Small Mission for Advanced Research in Technology-2’ (SMART-2,SMART-1 having been ESA’s 2003 ion-thruster mission to the Moon). A daunting number of new technologies are being mastered so the mission can perform as envisaged.