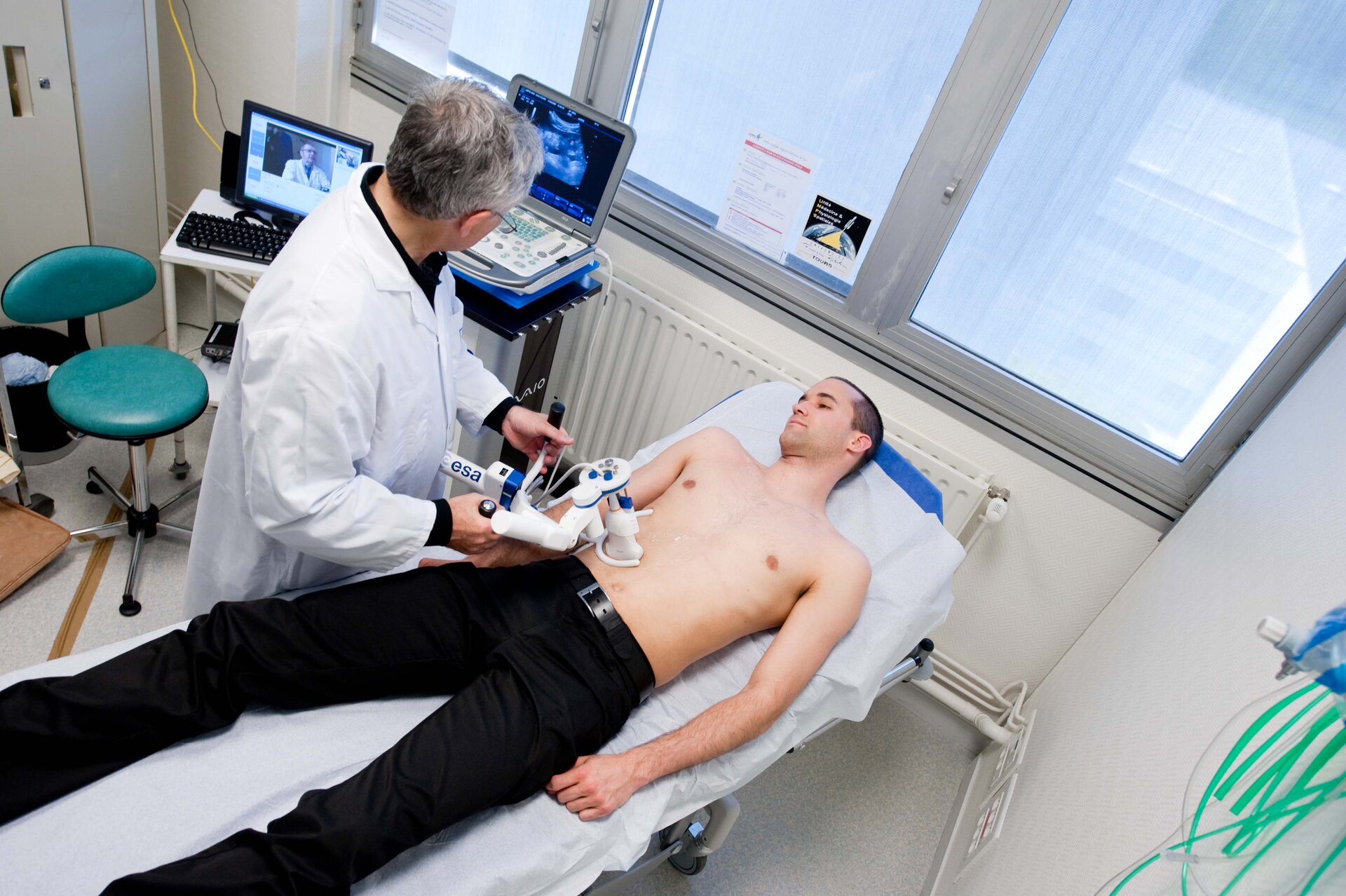 Ultrasound is an extremely useful medical technique, provided the operator has the expertise. In small clinics, however – and still more on spacecraft – trained radiologists are rare.

So ESA is testing a new robotic ultrasound system for remote operation by distant specialists.

An assistant simply holds the device against the patient and the ultrasound expert can move the probe as if present in the examination room, rather than thousands of kilometres away. They control the device in real time using a joystick, based on ultrasound imagery relayed back.

“The guiding principle behind telemedicine is that it is more convenient – and often much less costly – to move knowledge around than people,” said Arnaud Runge, a biomedical engineer overseeing the Advanced Robotised Tele-echography Integrated Service (ARTIS) project for ESA. 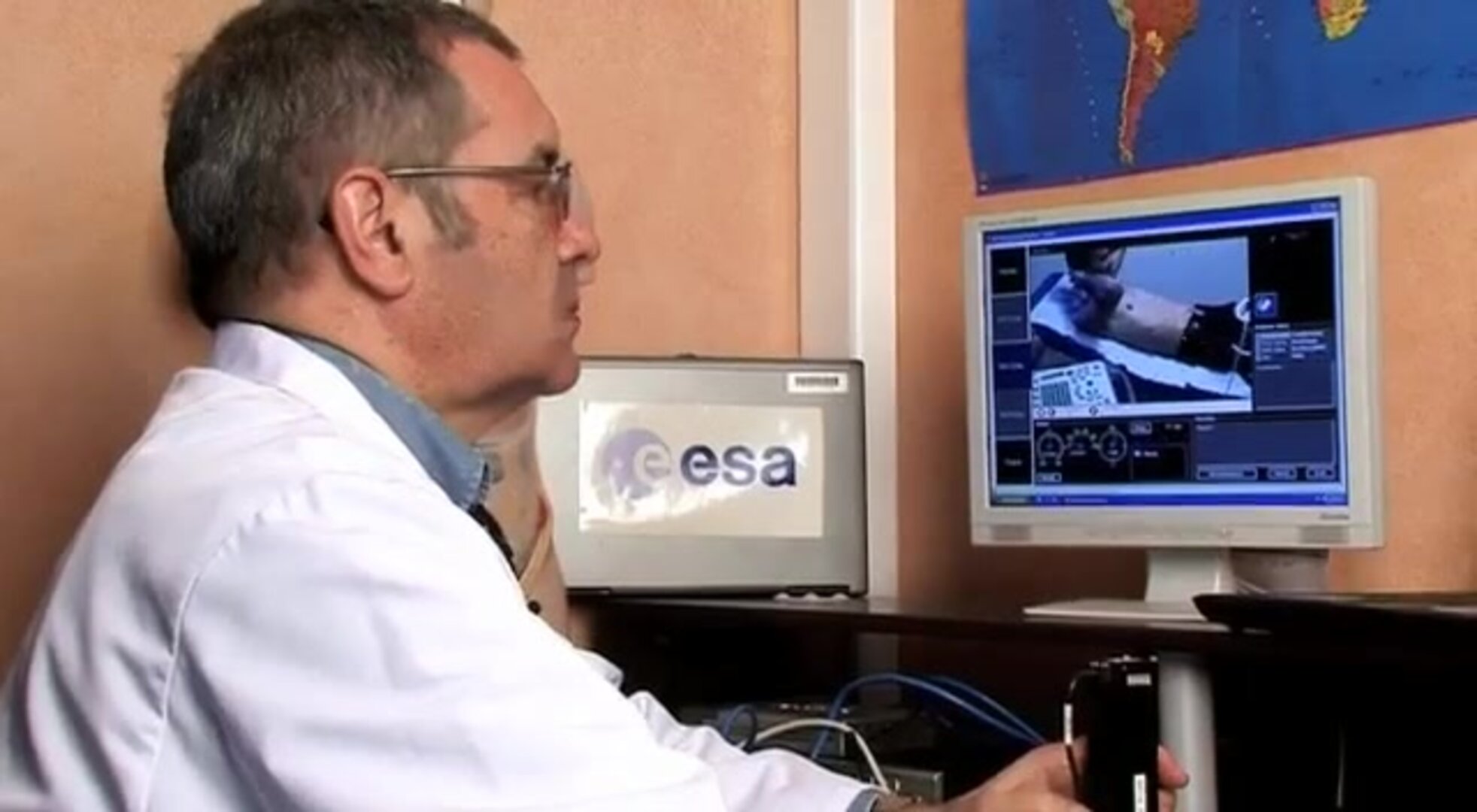 “Remote access can be vital for astronaut medical emergencies, and the system was originally developed for Earth-based space mission simulations, such as the remote Concordia base in Antarctica.

“But ARTIS can also benefit a very broad community of terrestrial users, improving access to healthcare for people in underserved or isolated areas.”

The project is investigating a wide variety of telemedicine medical services, with ultrasound as a case study.

“Ultrasound is the most demanding telemedicine scenario,” added Mr Runge. “It gathers a wealth of medical information, but is strongly dependent on well-qualified experts making realtime interpretation of dynamic data.”

The International Space Station carries an ultrasound system, for example, but mainly for scientific research. It is theoretically usable for medical exams as well, but only with the spoken instructions of a dedicated medical team.

By contrast, ARTIS lets the remote operator move the robotic probe-holder through yaw, pitch and roll as well as instruct the holder to modify the ultrasound probe’s pressure on the patient’s body.

The system includes an integrated videconferencing option with remote-controllable webcam so the expert can watch the device being applied. The device’s mass was kept under 2.5 kg so it can be held comfortably for the duration of an exam.

This end-to-end tele-ultrasound service has undergone a series of field trials by healthcare professionals on patients in a variety of configurations, including the use of satellite communications. “This brings in a couple of seconds delay but ultrasound professionals have adapted well in practice,” Mr Runge explained.

Trial users to date include the radiology department of the Galati Hospital in Romania and the Health Department of the Spanish Ministry of Defence. The procurement agency for the French Ministry of Defence, the Direction Générale de l'Armement, plans an extensive trial this coming year, while Italian oil company ENI will perform a six-month trial in its Congo clinic.

The Spanish Ministry of Defence will use it with its peace-keeping forces in Afghanistan as part of a follow-on ESA-led project called T4MOD.

ESA has a large portfolio of health-related initiatives – more than 120 in all – of which telemedicine is an important element, highlighted in ESA’s Space for Health website (see right hand link).