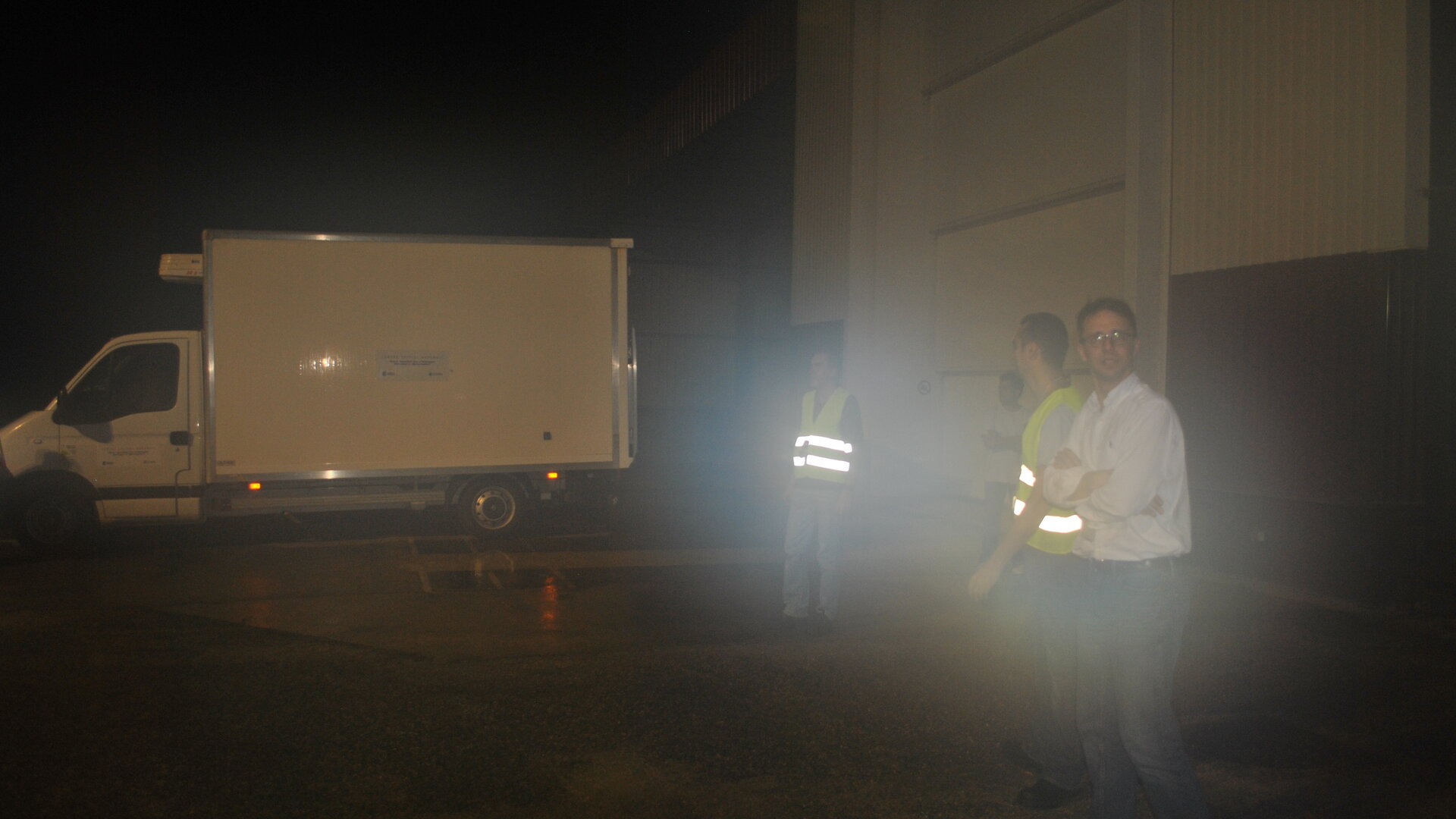 Departure of the satellite and associated hardware from QinetiQ Space in Kruibeke, Belgium to Brussels airport for packaging on an aircraft pallet.

In parallel with Proba-V’s initial team from QinetiQ (Davy Vrancken, Tom Debraekeleer and Bart De Wilde) travelling to Kourou, the satellite travelled from Brussels airport to Paris Orly airport by lorry. The satellite was stored in the Air France warehouse overnight.

The satellite was loaded in the Air France daily passenger flight at 09:40 CET. The flight took off at 10:58 CET en route to Kourou. The satellite and its associated hardware travelled unattended. The first wave of the ESA team (Michale Francois and me) departed on the same day, aboard the Air Caraibes flight departing at 12:50 CET.

Offloading of Proba-V from the aircraft proved a very smooth process. The satellite container and the two batteries (flight and spare) were loaded in an air-conditioned truck. The convoy escorted by the Gendarmerie started the final trip to the Guiana Space Centre at 19:30 and arrived there at 21:15. One QinetiQ Space team member travelled with the satellite container while a second followed the convoy.

The associated equipment (Ground Segment Equipment, GSE) was also unloaded and loaded on to a dedicated lorry that started immediately travelling to CSG. One QinetiQ team member escorted the ground equipment. All equipment was placed in secure storage inside CSG.

The ESA team arrived at CSG at the same time as the satellite and was present for the offloading of the lorry into the airlock of the S1B EPCU (Ensemble Preparation Charge Utile) payload preparation building. An hour later the airlock was opened and the containers moved inside the cleanroom. The EPCU was then closed and secured for the night. The EPCU will be the new home of the satellite for the next three weeks.

The day started with the daily meeting with CNES and Arianespace and the opening of the EPCU secured area. The day was dedicated to the opening of Proba-V’s associated hardware containers, preparation of the integration hall and the set-up of the satellite stand.

A day off; so the whole of the Proba-V team on the scene so far went for a walk in the jungle. The OIP Sensor Systems team, developer of the Vegetation Instrument, arrived in French Guiana.

Daily meeting for preparation of the day’s activities. The first activity was the removal of satellite from its container and the positioning on its stand.

In parallel the OIP team prepared the Optical Ground Support Equipment needed for the alignment check of the instrument.

The day continued with the installation and setup of all the GSE, the day finishing at 19:30.