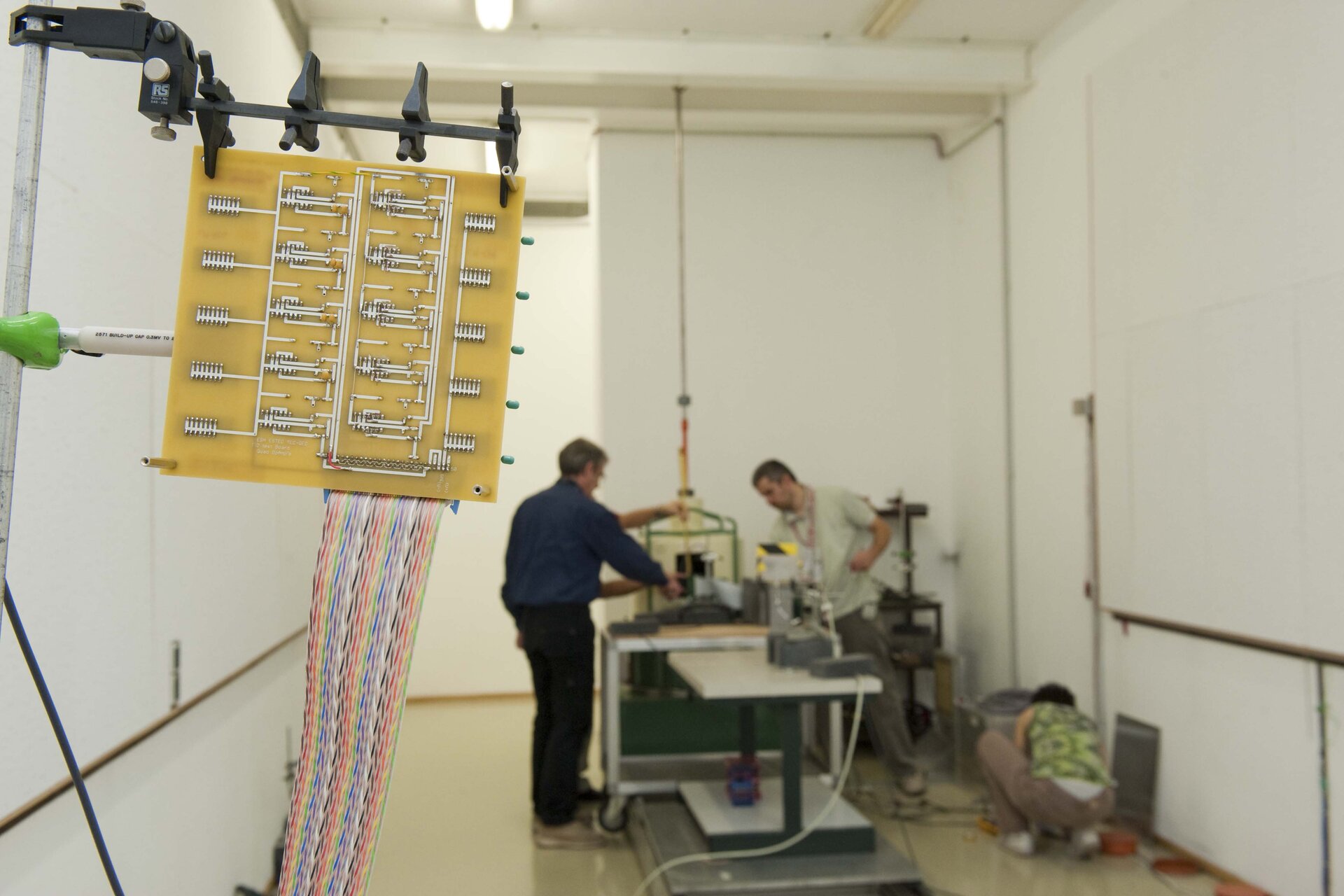 “We want to see the kind of response our component will have to that environment,” added Ali. “So we use radiation sources representative of the worst case we see in space, for example with the cobalt-60 gamma source we have on site.

“We assess the component’s sensitivity to estimate its reliability. For instance, for SEEs, does an event occur every 10 000 years or once a day? Then we can identify if it is suitable for the mission, and whether mitigation strategies can be implemented: localised shielding perhaps, or global shielding around the equipment box.

“But testing is becoming more difficult as devices grow much more complex. Current ASICs (application specific integrated circuits) or FPGAs (field-programmable gate arrays) house millions of transistors and it is hard to identify all the potential perturbations a SEE can trigger.

“We start off simulating the space environment in terms of heavy ions, and if the test item turns out to be very sensitive then we switch to proton testing as well.

“We have some very powerful simulators to help evaluate effects, but they can only be useful once the initial sensitivity is confirmed.”

Advising on anomalies in orbit

For more specialised high-energy testing, the Laboratories turn to a network of external radiation labs across Europe. Switzerland’s Paul Scherrer Institute is one example: while specialising in physics and radiological medical treatment, its Proton Irradiation Facility is designed for high-energy proton beam testing of satellite components. The Laboratories and their external facilities, along with the Space Environment and Effects Section, are sometimes called in to advise currently flying missions on radiation-induced anomalies.

“Even after extensive preparatory testing, there are in some cases nasty unforeseen surprises that are observed,” Ali said. “We work to identify and understand them and help come up with workarounds. Ultimately, that might simply come down to switching off sensitive equipment when passing through the radiation belts or the South Atlantic Anomaly, which is a segment of the radiation belt that dips closest to Earth.”

Other mitigation techniques can be built in to reduce microprocessors’ sensitivity in the first place. ‘Error detection and checking’ involves adding an extra bit to every word in memory, placed in different quadrants of the chip so that any disruption can be swiftly identified.

Customised software for memory devices performs extra checks to repair any damage, while ‘triple redundant voting’ employs parallel circuit branches to check each other for mistakes, taking a vote when uncertain which branch is in error.

An inevitable price is paid in overall functionality and potentially speed, so component designers have to think about trade-offs: are fully rad-hardened components needed, or is a certain error level acceptable in return for greater processing speed and flexibility?

Researching future missions, Galileo is one priority. Europe’s satellite navigation system must perform to an assured level of accuracy through each satellite’s 12-year lifetime, despite orbiting through the outermost Van Allen Belt.

The proposed EJSM-Laplace mission to the moons of Jupiter will have to endure the intense radiation belts within the giant planet’s magnetic field.

Between them, the Space Environment and Effects Section and Components Space Evaluation and Radiation Effects Section also advise on Radiation Hardness Assurance standards for the European Cooperation for Space Standards (ECSS: a body overseeing a comprehensive set of space manufacturing standards).

They also perform research and develop irradiation test guidelines related to the European Space Component Coordination (ESCC), an initiative aimed at increasing the availability and quality of European components for space.

The Space Environment and Effects section also has one additional responsibility: assessing the effects of space radiation on human health.

Astronauts on the International Space Station stay sheltered within Earth’s magnetic field from the higher radiation flux prevailing in deep space. However, they are officially classed as radiation workers, wearing dosimeters to measure their overall dose, and their exposure goes up at least threefold during spacewalks.

“And, uniquely, astronauts sometimes get to see radiation exposure as it occurs, experiencing ghostly flashes as charged particles pass through their optic nerve.

“ESA’s Christer Fuglesang was among astronauts who have donned a mask incorporating radiation detectors, to try and correlate these flashes with actual particles measured.”

Prolonged ventures beyond low orbit will be the real challenge. Hard-won rad-hardening knowledge will have to be combined with protection strategies before astronauts can venture forth safely to explore the Solar System.