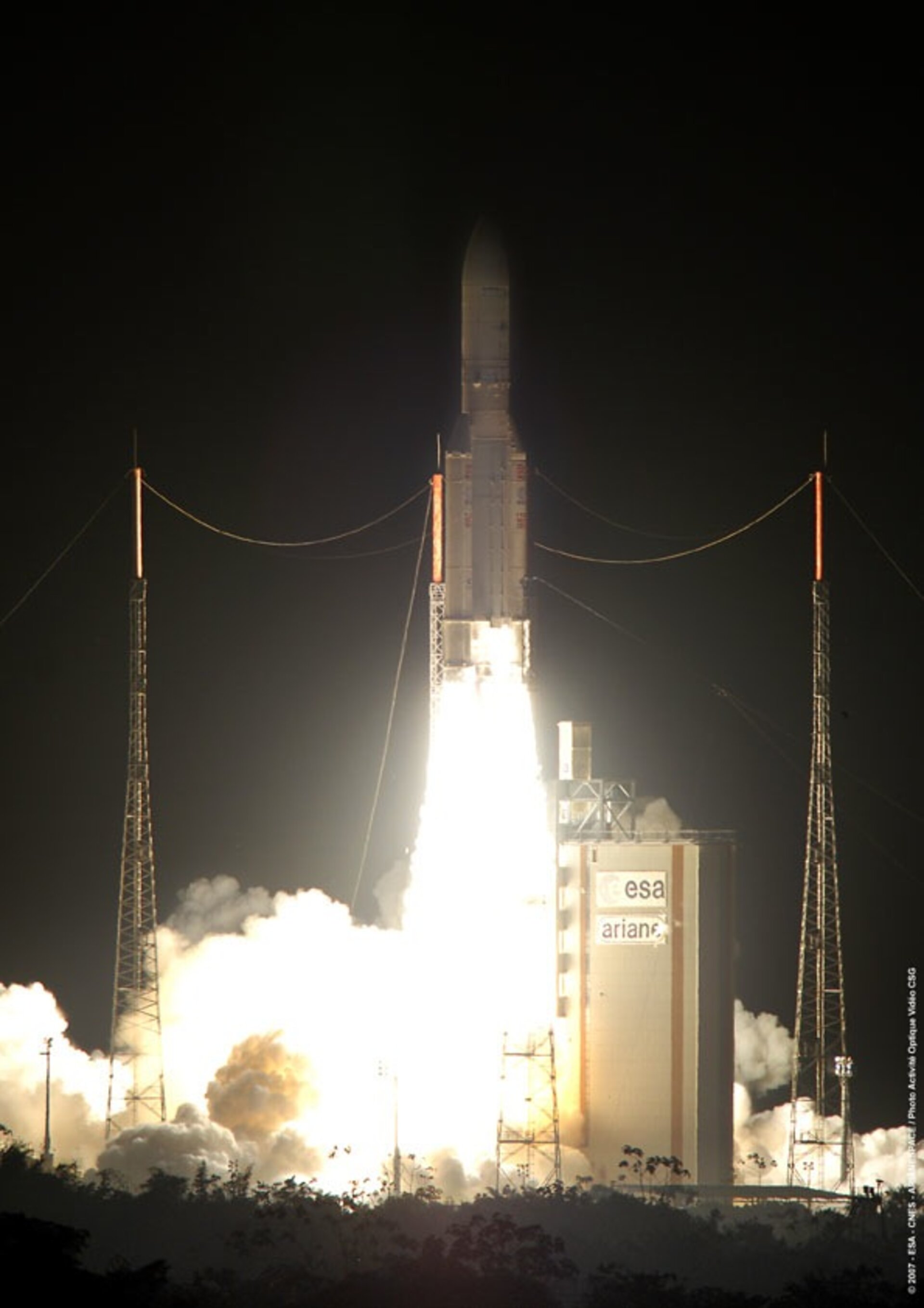 Last night, an Ariane 5 ECA launcher lifted off from Europe's Spaceport in French Guiana on its mission to place two telecommunications satellites into geostationary transfer orbits.

The payload comprised SPACEWAY 3, which will deliver broadband services throughout North America, and which will provide direct television links for Japan. The payload mass was 8848 kg; the satellite masses totalled 8042 kg, with payload adapters and dispensers making up the additional 806 kg.

This third launch of the year keeps Arianespace and Europe's Spaceport on target to perform six Ariane 5 launches in 2007 as they head towards their target of seven to eight missions per year from 2009.

Ariane 5's cryogenic, liquid fuelled, main engine was ignited first. Seven seconds later, the solid fuel rocket boosters were also fired, and a fraction of a second after that, the launch vehicle lifted off.

The solid boosters were jettisoned 2 min: 20 sec after main engine ignition, and the fairing protecting the payload during the climb through the Earth's atmosphere was discarded at 3 min: 08 sec. The launcher's main engine was shut down at 8 min: 59 sec; six seconds later the main cryogenic stage separated from the upper stage and its payload.

Four seconds after main stage separation, the engine of the launcher's cryogenic upper stage was ignited to continue the journey. The upper stage engine was shut down at 24 min: 53 sec into the flight, at which point the launch vehicle was travelling at 9435 m/s (almost 34 000 km/h) at an altitude of 557.5 kilometres and the conditions for geostationary transfer orbit injection had been achieved.

For this launch, an attempt is being made to recover the solid rocket boosters from the Atlantic Ocean and return them to Kourou for examination. After the boosters separate from the launch vehicle at an altitude of about 66 km and a speed of 1950 m/s (7020 km/h), their momentum carries them up to an altitude of nearly 120 km before they begin their return to Earth.

When the boosters have fallen to an altitude of 5 km, by which time they are descending at 200 m/s (720 km/h), their nosecones are ejected and a parachute system is deployed. The main parachutes are 48 m in diameter and slow the descent rate of the 40 tonne booster casings to below 27 m/s (100 km/h) for landing in the sea around 8 min: 40 sec after lift off.

Ariane 5 ECA is the latest version of the Ariane 5 launcher. It is designed to place payloads weighing up to 9.6 tonnes into geostationary transfer orbit. With its increased capacity Ariane 5 ECA can handle dual launches of very large satellites.