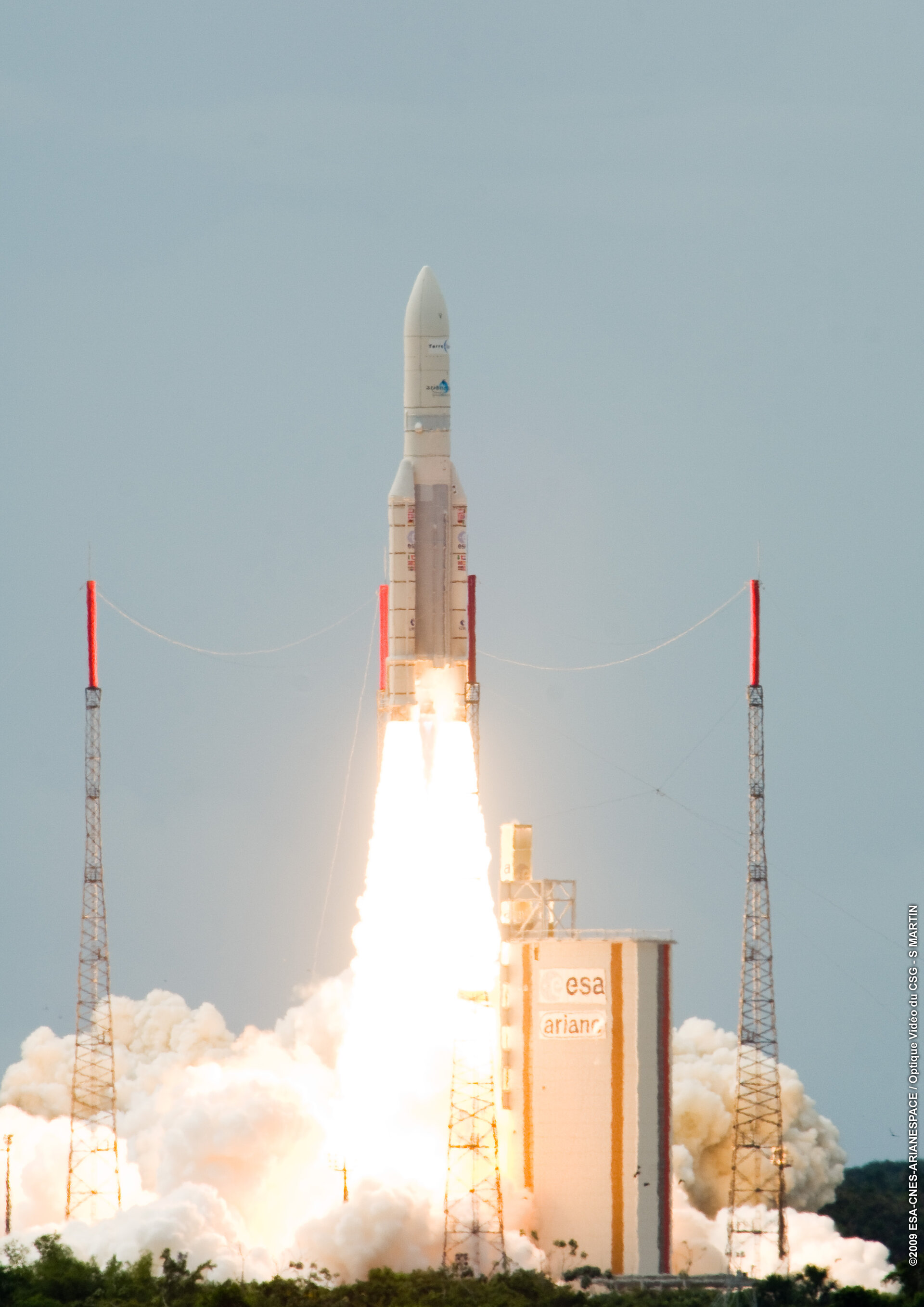 Earlier this evening, an Ariane 5 ECA launcher lifted off from Europe’s Spaceport in French Guiana on its mission to place the heaviest and most powerful telecommunications satellite ever launched, TerreStar 1, into geostationary transfer orbit.

Lift-off of flight V189 took place at 19:52 CEST/Paris (17:52 UTC/GMT; 14:52 UTC-3/French Guiana) The target orbit had a perigee altitude of 250 km, an apogee altitude at injection of 35 786 km and an inclination of six degrees. TerreStar 1 was accurately injected into its transfer orbit about 26 minutes after lift-off.

TerreStar 1 will operate in the 2 GHz portion of the spectrum to provide voice, data and video communications to satellite/terrestrial mobile devices the size of a typical smart phone. TerreStar 1’s coverage is tailored to provide critical services for government, emergency responders, rural communities and commercial users throughout the United States and Canada. The payload mass for this launch was 7055 kg; the satellite’s launch mass was 6910 kg and the payload adapter weighed 145 kg.

Arianespace and Europe’s Spaceport are planning seven Ariane launches during 2009, maintaining the heavy-lift vehicle’s flight rate. The ability to sustain high launch rates has already been demonstrated – during the 12-month period from August 2007 to August 2008, there were nine launches (V177 to V185, inclusive).

The solid boosters were jettisoned 2 min: 19 sec after main engine ignition, and the fairing protecting the payload during the climb through the Earth’s atmosphere was discarded at 3 min: 10 sec. The launcher’s main engine was shut down at 8 min: 51 sec; six seconds later the main cryogenic stage separated from the upper stage and its payload.

Four seconds after main stage separation, the engine of the launcher’s cryogenic upper stage was ignited to continue the journey. The upper stage engine was shut down at 24 min: 35 sec into the flight, at which point the launch vehicle was travelling at 9563 metres per second (just over 34 400 km/h) at an altitude of 417.6 kilometres and the conditions for geostationary transfer orbit injection had been achieved.