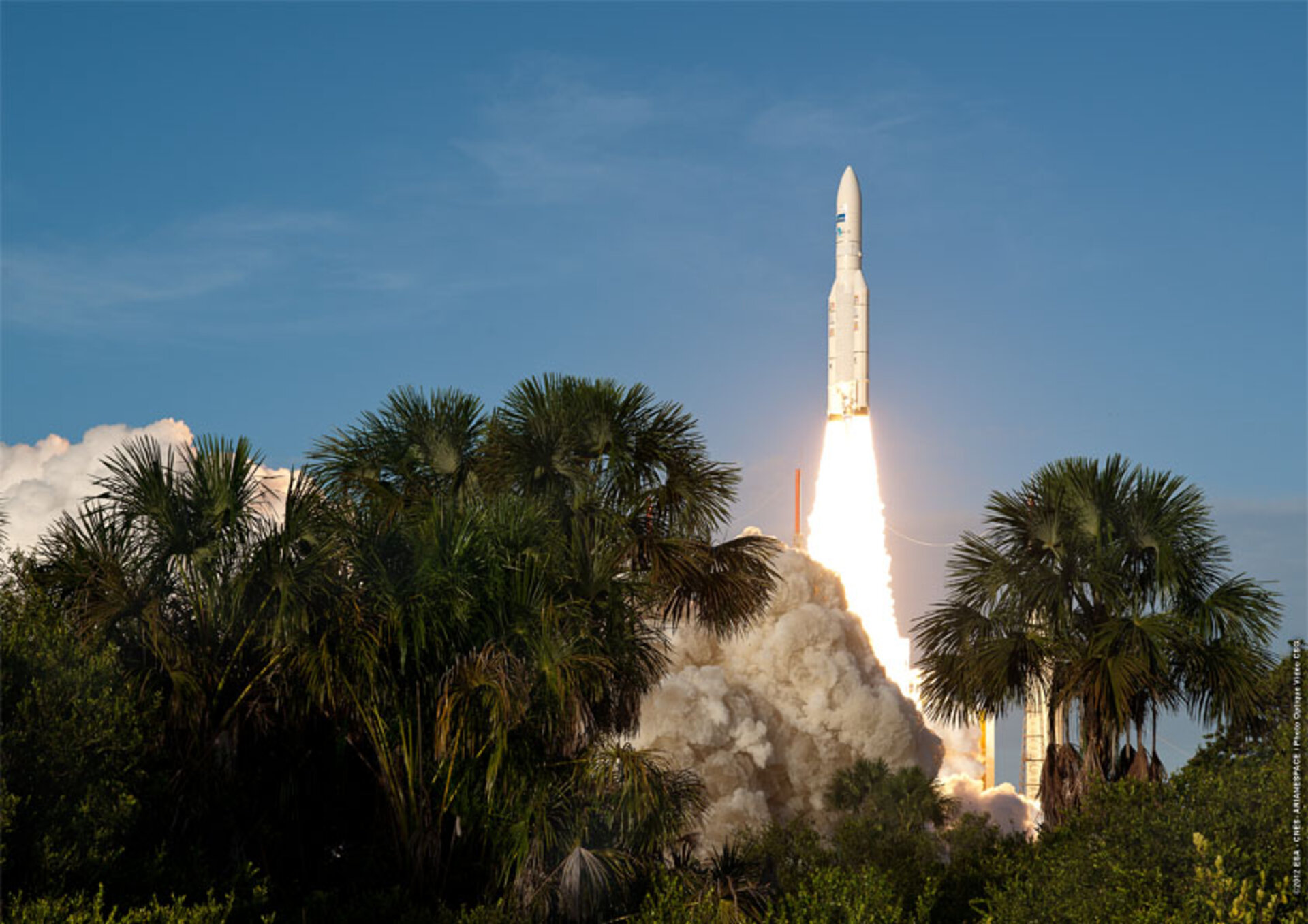 Tonight marked the 50th successful Ariane flight in a row: an Ariane 5 was launched from Europe’s Spaceport in French Guiana to perform a dual deployment of two telecommunications satellites, Intelsat 20 and Hylas-2, into their planned transfer orbits.

Including its double payload, the 50.5-m-tall Ariane 5 ECA had a total lift-off mass of 780 tonnes. Its target injection orbit had a perigee (low point) of 249.5 km and apogee (high point) of 35 934 km with an inclination of 6° relative to the equator.

Once placed in this transfer orbit, the satellites’ own thrusters then gradually circularise their orbits to attain geostationary orbit – where they keep pace with Earth’s own rotation, causing them to remain at fixed points in the sky.

Positioned in geostationary orbit at 68.5 degrees East – above the Indian Ocean – the satellite is replacing the Intelsat 7 and 10 satellites to provide video, telephone and data transmission services for Europe, Africa, Russia and the Middle East.

With a launch mass of 3325 kg, Hylas-2 was constructed for UK company Avanti Communications by US-based Orbital Sciences Corporation.

Positioned in geostationary orbit at 33.5 degrees West – above the Atlantic – the satellite employs high-bandwidth Ka-band to provide broadband internet and two-way data services across Europe, Africa and the Middle East.

The combined mass of the two satellites and auxiliary support structures added up to 10 183 kg, which is a performance record for Ariane 5.

The solid boosters were jettisoned 2 min 21 sec after main engine ignition, and the fairing protecting the payload during the climb through Earth’s atmosphere was discarded at 3 min 16 sec.

The launcher’s main engine shut down at 8 min 57 sec; six seconds later, the main cryogenic stage separated from the upper stage and its payload.

Four seconds after main stage separation, the engine of the cryogenic upper stage ignited to continue the journey. Orbital injection took place at 25 min 25 sec, at which point the vehicle was travelling at 9352 m/s (33 667.2 km/h) at an altitude of about 658 km. The conditions for geostationary transfer orbit injection had been achieved.