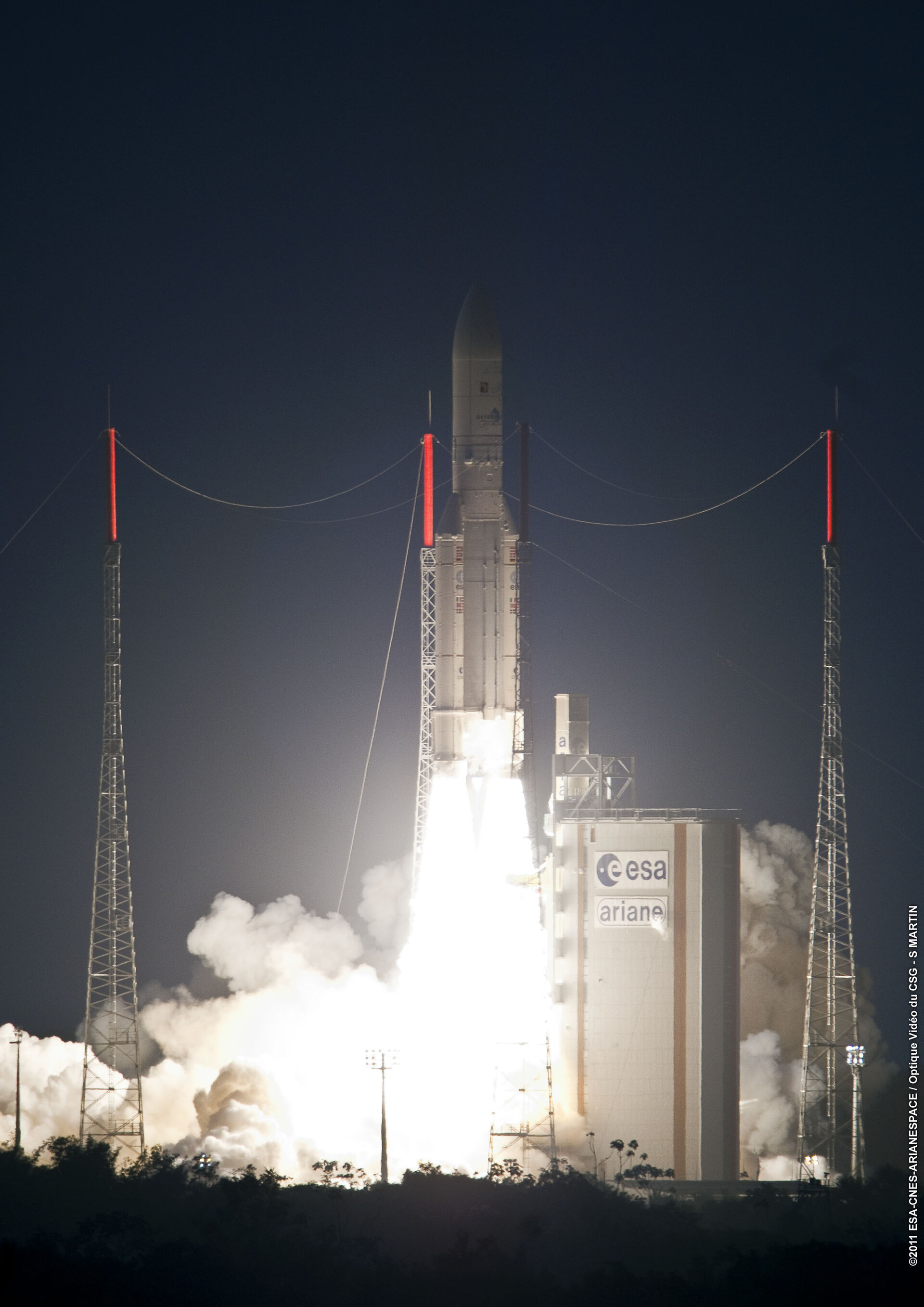 Last night, an Ariane 5 launcher lifted off from Europe’s Spaceport in French Guiana on its mission to place two telecommunications satellites, Yahsat Y1A and Intelsat New Dawn, into their planned transfer orbits. Flight VA201 was the second Ariane 5 launch of 2011.

The satellites were accurately injected into their transfer orbits about 27 minutes and 35 minutes after liftoff, respectively.

Yahsat Y1A will be positioned above the equator at 52.5°E. It will provide innovative broadband solutions for Internet, business data and high-definition television services to institutional and commercial customers in the Middle East, Africa, Europe and Southeast Asian.

Intelsat New Dawn, to be positioned over 32.8°E, will offer a wide range of services to Africa, including telephony, Internet, media and data networks.

The payload mass for this launch was 10 064 kg; the satellites totalled 8965 kg, with payload adapters and dispensers making up the additional 1099 kg.

With a total mass of over 10 t, it is the heaviest payload ever launched by an Ariane 5 ECA. This was made possible by detailed post-flight analyses to fully exploit the propulsion potential of each stage. Further performance increases are in the pipeline to keep up with the trend towards heavier telecom satellites.

The Ariane 5’s cryogenic, liquid-propellant main engine was ignited first. Seven seconds later, the solid-propellant boosters also fired, and the vehicle lifted off a fraction of a second later.

The solid boosters were jettisoned 2 min 20 sec after main engine ignition, and the fairing protecting the payload during the climb through Earth’s atmosphere was discarded at 3 min 11 sec.

The launcher’s main engine was shut down at 8 min 53 sec; six seconds later, the main cryogenic stage separated from the upper stage and its payload.

Four seconds after main stage separation, the engine of the cryogenic upper stage was ignited to continue the journey. The engine was shut down at 25 min 21 sec into the flight, at which point the vehicle was travelling at 9354 m/s (33 674 km/h) at an altitude of 656.7 km. The conditions for geostationary transfer orbit injection had been achieved.