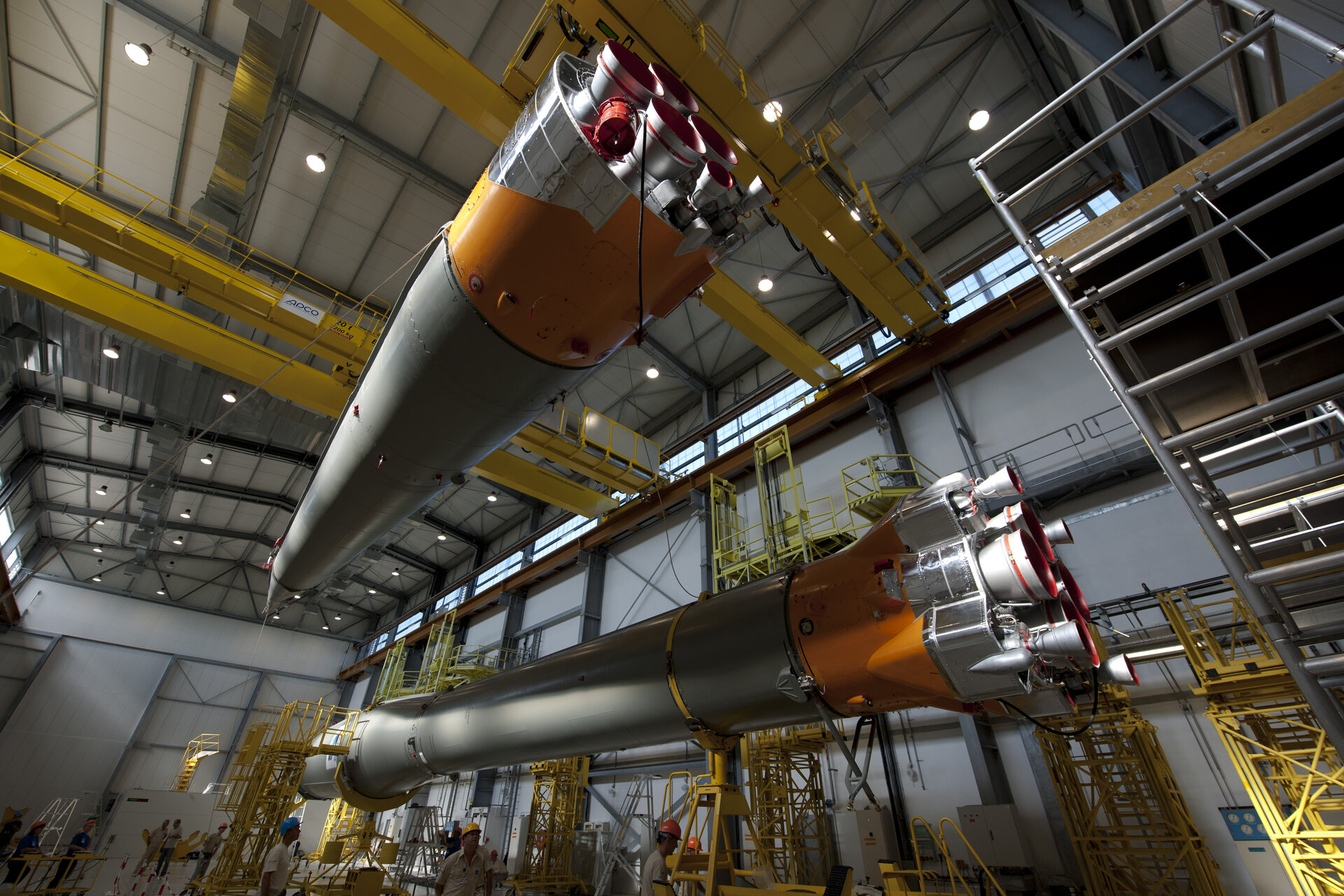 The clock is ticking for the first Soyuz flight from Europe’s Spaceport in French Guiana. The rocket, which will carry the first two satellites of Europe’s Galileo navigation system into orbit, is being prepared for launch on 20 October.

Final assembly began on 12 September of the three-stage Soyuz ST-B, consisting of four first-stage boosters clustered around the core second stage, topped off by the third stage.

The Launcher Flight Readiness Review in July gave the green light to begin assembling the rocket.

The campaign began on 16 August in the assembly and testing building – known by its original ‘MIK’ Russian acronym – with electrical and mechanical tests of the upgraded, reignitable Fregat-MT upper stage. It will carry an additional 900 kg of propellants for its double-satellite load.

Fregat was then moved to the Payload Preparation Building S3B to fill its four spherical propellant tanks.

Soyuz will be rolled out horizontally to the launch pad on 14 October and raised into its vertical launch position.

A new 45 m-tall mobile gantry was built specifically for Soyuz operations in French Guiana. It protects the satellites and the launcher from the humid tropical environment and provides access to the Soyuz at various levels for checkout activities.

The upper composite, comprising the Fregat upper stage, payload and fairing, is then hoisted on top of Soyuz.

October’s launch will be doubly historic: the first Soyuz from a spaceport outside of Baikonur in Kazakhstan or Plesetsk in Russia and the start of building Europe’s Galileo satnav constellation.

The two Galileo satellites have arrived from the Rome facility of Thales Alenia Space Italy - the first on 7 September, the second on 14 September - and are undergoing initial preparations.

The next step will be to attach the satellites to Fregat, followed by the fairing.

Next year, the second pair of satellites will join them in orbit, proving the design of the Galileo system in advance of the other 26 satellites.

These first four satellites, built by a consortium led by EADS Astrium Germany, will form the operational nucleus of the full Galileo satnav constellation.

They combine the best atomic clock ever flown for navigation – accurate to one second in three million years – with a powerful transmitter to broadcast precise navigation data worldwide.

‘Soyuz at CSG’ – drawing on the French name of Centre Spatial Guyanais – is an ESA programme with the participation of seven Member States.

Construction of the Soyuz launch site began in February 2007, although initial excavation and ground infrastructure work began in 2005 and 2006, respectively.

It is almost identical to the other Soyuz sites in Kazakhstan and Russia, although adapted to conform to European safety regulations. The most visible difference is the mobile gantry.

ESA handed over the site to Arianespace, responsible for the Soyuz launch operations, in March. A simulated launch campaign was completed in May.