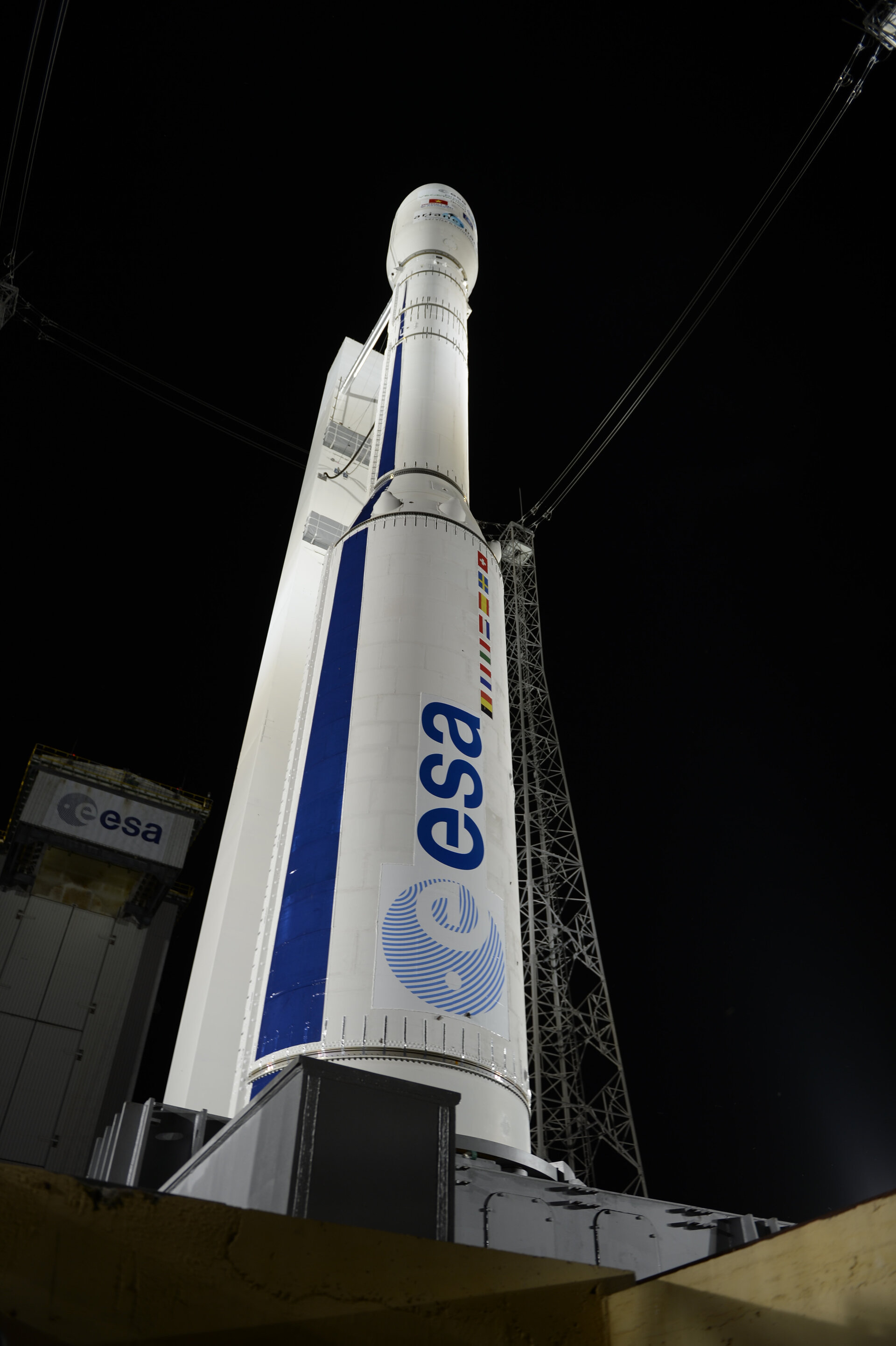 The three solid-propellant stages performed flawlessly and, after two burns of the liquid-propellant upper stage, Proba‑V was released into a circular orbit at an altitude of 820 km, over the western coast of Australia, some 55 minutes into flight.

The satellite is now being controlled by ESA’s centre in Redu, Belgium, where it is undergoing a health check and testing before the operational phase starts to monitor the vegetation coverage on Planet Earth.

After releasing Proba-V, the upper stage performed a third burn and the top half of the egg-shaped Vega Secondary Payload Adapter was ejected. After a fourth burn to circularise the orbit at an altitude of 704 km, VNREDSat-1A was released 1 hour 57 minutes into flight. ESTCube‑1 was ejected from its dispenser three minutes later.

A fifth and last burn will now place the spent upper stage on a trajectory that ensures a safe reentry that complies with new debris mitigation regulations.

“It is another great day for ESA, for its Member States and for Europe. Thanks to decisions taken by Member States, ESA and European industry are demonstrating once again their capabilities of innovation. Among the Member States, special mention goes to Italy which has led the Vega Programme, Belgium which has led the Proba projects at ESA, and France which has led the development and maintenance of the European spaceport here in Kourou. We are also proud to have made possible the launch of the first satellite from Estonia. ,” said Jean-Jacques Dordain, Director General of ESA.

The flight was conducted under the Vega Research and Technology Accompaniment programme (VERTA) that aims at demonstrating the versatility of the launch system. It also marked the start of the transition from ESA to Arianespace as launch operator. Arianespace provided flight analysis, preparation and operations, and the marketing that secured VNREDSat‑1A as Vega’s first commercial payload.

It also introduced new flight software developed by contractor ELV and a new tracking station in the northwest of French Guiana that ensures telemetry links during some phases of the flight when they could be affected by the plume from the solid propellants.

“Vega has confirmed that it is ready to deliver a high-quality service for small payloads to low Earth orbit,” said Antonio Fabrizi, ESA’s Director of Launchers. “Europe now has the capability to serve both the government and commercial market in this growing market segment.

“Since the qualification flight one year ago, the marketplace has warmly embraced the arrival of Vega, and today we launched the first commercial satellite.”

The Proba‑V primary payload is a 138,2 kg satellite built by Qinetiq Space Belgium.

“With the launch of this third Proba satellite, ESA’s small satellite series has come of age,” notes Franco Ongaro, ESA Director of Technical and Quality Management.

“This flight affirms ESA’s capacity to provide concepts and flexible mission designs that address specific needs in a short time. Proba‑V will be an operational satellite as soon as it is commissioned, supplying data to an eagerly waiting community.

“In addition, it continues the tradition of being a technology demonstrator for innovative technology that will benefit the wider European space community for years to come.”

Proba‑V is based on the platform flown on two previous ESA missions and carries the Vegetation imager to map global vegetation cover every two days, as a follow-on to the first generation of Vegetation imagers on France’s Spot-4 and -5 satellites.

Proba-V is flying in the same orbit as Spot-5 in order to take over from the ageing satellite on its retirement next year. Vegetation is a high-technology optical imager designed to provide 350 m-resolution imagery in four visible and infrared bands with an impressive 2250 km swath width that will allow daily coverage of all areas within 35–75ºN and 35–56ºS. These data will be processed and provided to a wide community of international users, including the European Commission.

In addition to this primary payload, Proba also hosts a series of technology payloads such as  a receiver to detect aircraft in flight around the globe,  a communications amplifier based on the latest gallium nitride technology, a novel pair of radiation monitors and a photonics experiment testing fibre optics for space.

More information on Proba can be found at:
http://www.esa.int/Our_Activities/Technology/Proba_Missions

VNREDSat-1A (Vietnam Natural Resources, Environment, Disaster Satellite) is a 115,3 kg commercial remote sensing satellite built by Astrium for Vietnam’s Academy of Sciences and Technologies. Its launch was contracted through Arianespace in January.

ESTCube-1 is Estonia’s first satellite. This 1.3 kg CubeSat was designed and built by students from the University of Tartu with a contribution from the Finnish Meteorological Institute. It will deploy a 10 m-long tether to demonstrate electrostatic manoeuvring through the plasma flow, which could lead to electrostatic solar sails for propellantless interplanetary travel.

As technology advances allow satellites to shrink, demand is increasing for smaller satellites, in particular for scientific and Earth observation missions. As an affordable response to European institutional needs and to maintain its competitiveness in the world’s launch services market, Europe has developed the Vega launch system.

Vega is able to inject payloads of up to 1.5 tonne into low polar orbits at altitudes of 300–1500 km. With a length of 30 m and a diameter of 3 m, it has three solid-propellant stages (P80, Zefiro-23 and Zefiro-9) and a liquid-propellant stage (AVUM: Attitude and Vernier Upper Module). Unlike most small launchers, it is able to place multiple payloads in orbit.

The VERTA programme covers a batch of five missions to demonstrate the flexibility of the system, promoting the smooth introduction of the vehicle for commercial exploitation.

Seven ESA Member States (Italy, France, Spain, Belgium, the Netherlands, Switzerland and Sweden) are contributing to the Vega programme. The industrial prime contractor is ELV SpA, 70% of which is owned by Avio SpA and 30% by Italy’s ASI space agency.

More information on Vega at:
http://www.esa.int/Our_Activities/Launchers/Launch_vehicles/Vega

The European Space Agency (ESA) is Europe's gateway to space.