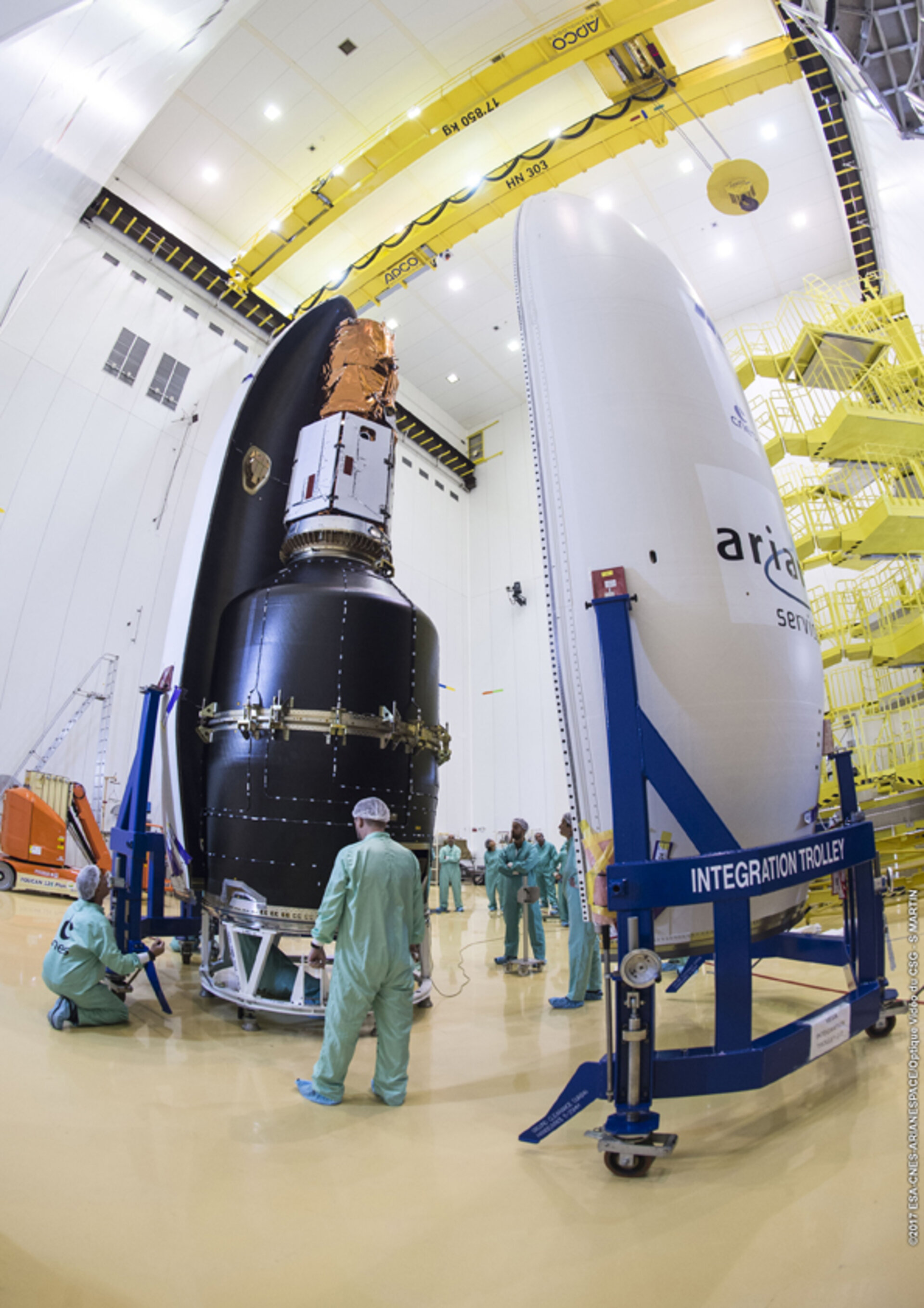 Rocket fairings are now lighter, faster to produce and less costly thanks to a manufacturing process adopted by RUAG Space in Switzerland through a partnership with ESA.

The fairing protects satellites from the thermal, acoustic and aerodynamic stresses on the ascent to space. The new fairings have already flown on the latest Ariane 5 and Vega missions, and fairings for the future Ariane 6 and Vega‑C vehicles will be produced in the same way.

Typically, high performance fibre-polymer composite structures are cured in an autoclave, a large heated container that keeps them under pressure. Autoclaves are expensive and limited in size, so large components are made in segments and then joined together. This constrains the design while increasing weight and the production time.

ESA and RUAG Space collaborated to establish an out-of-autoclave process where the carbon-fibre shells are cured in an industrial oven instead of an autoclave. This requires less energy and allows the curing of an entire large half-shell in fewer pieces. It reduces cost, saves time and enables production of very large composite panels.

Payload fairing shells for Ariane 5 are now made in two panels per half-shell instead of seven. This has reduced the mass of the fairing, which allows a heavier payload to be sent into orbit.

Vega shells are made in one panel per half-shell instead of two, so no metallic junctions are needed.

Fewer parts allow horizontal and vertical assembly of the closed fairing and the launcher, which is particularly important for Ariane 6.

ESA helped to fund development of the fairing through Ariane development and exploitation programmes, as well as through the Future Launchers Preparatory Programme. This involved a commitment to help implement the out-of-autoclave technology on a new production line intended for multi-launcher production.

In parallel, RUAG and their industrial partners invested in a new manufacturing site in Emmen, Switzerland, as well as developing the equipment required to produce the payload fairing: oven, mould and inspection systems.

RUAG supplies the US with fairings for Atlas rockets and is now setting up a production line in Decatur, USA, using its new manufacturing process to develop new payload fairings, interstage adapters and heatshields for the Atlas and Vulcan rockets.

Arianespace, France’s CNES space agency and the launchers’ prime contractors – ArianeGroup and ELV – supported this initiative through engineering activities and technical reviews. This provided transparency to all partners on the new development, ensuring the formal qualification and acceptance of the fairing on the European launchers.