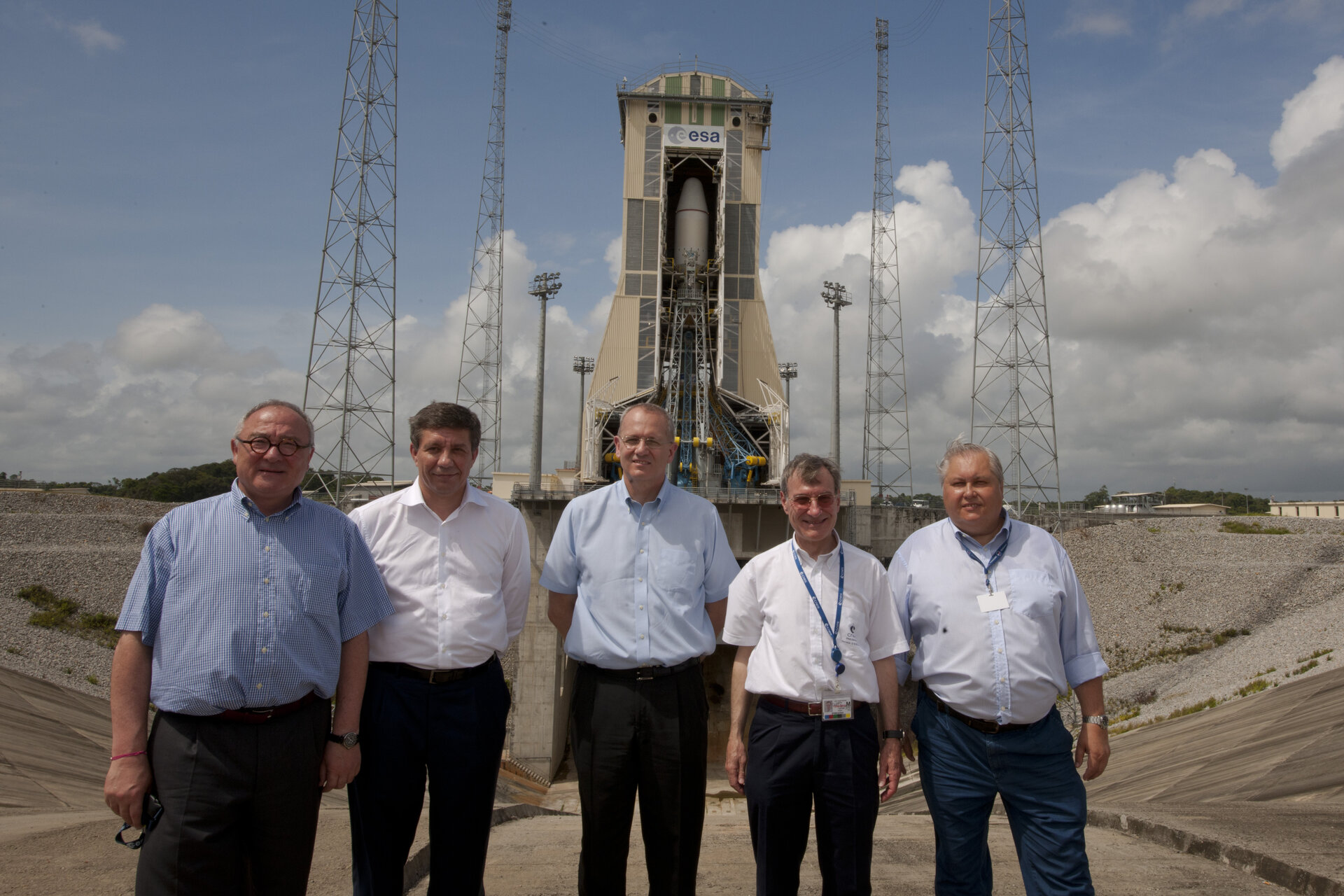 The official ceremony marking ESA’s handover of the Soyuz launch site to Arianespace took place today at Europe’s Spaceport in French Guiana, after the site was declared ready for the first flight and the completion of a simulated launch campaign.

The French space agency, CNES, as prime contractor for the building work, along with its European and Russian partners, has spent recent months qualifying the site.

In March, the ‘acceptance review’ declared that it was ready for its first rocket and at the same time CNES handed over the facilities to ESA. The last step was ESA’s hand-over to Arianespace on 31 March.

Arianespace became responsible for the Soyuz launch site and began a simulated launch campaign on 29 April that ended on 5 May.

This dry run ensured that the Soyuz and the new facilities work together perfectly, while allowing the teams to train under realistic launch conditions. It validated all the procedures during the five-day final phase before a launch.

To mark this occasion and to celebrate the recent 50th anniversary of the first man in space, a commemorative plaque and a stone from the Baikonur launch pad from which Yuri Gagarin took off in 1961 was sealed on the site.

This stone symbolises the continuity between the Russian launch site, which saw the start of the space age with Sputnik followed by the first human spaceflight, and the setting up of a Soyuz launch operation in French Guiana.

‘Soyuz at CSG’ – drawing on the French name of Centre Spatial Guyanais – is an ESA programme with the participation of seven Member States.

The decision to develop the infrastructure to enable Soyuz to be launched from French Guiana was of mutual interest to both Europe and Russia. From a European perspective, closer cooperation with Russia brings significant benefits, such as a reduction in the development and production costs of new launcher systems, as well as opening the door to other possible commercial partnerships in the future.

Construction of the Soyuz site began in February 2007, although initial excavation and ground infrastructure work began in 2005 and 2006, respectively.

The first two Soyuz launchers arrived from Russia by sea in November 2009 to be assembled in the new preparation and integration building.

The launch site is almost identical to the other Soyuz sites in Kazakhstan and Russia, although adapted to conform to European safety regulations.

The most visible difference is the 45 m-tall mobile gantry, which allows payloads to be installed on the launcher vertically on the launch pad. Its internal movable work platforms provide access to the Soyuz at various levels for checkout activities.

Soyuz fits neatly between the Ariane 5 and Vega launchers developed by ESA. Ariane 5 meets the requirements for larger satellites and Vega will complement this for smaller payloads.