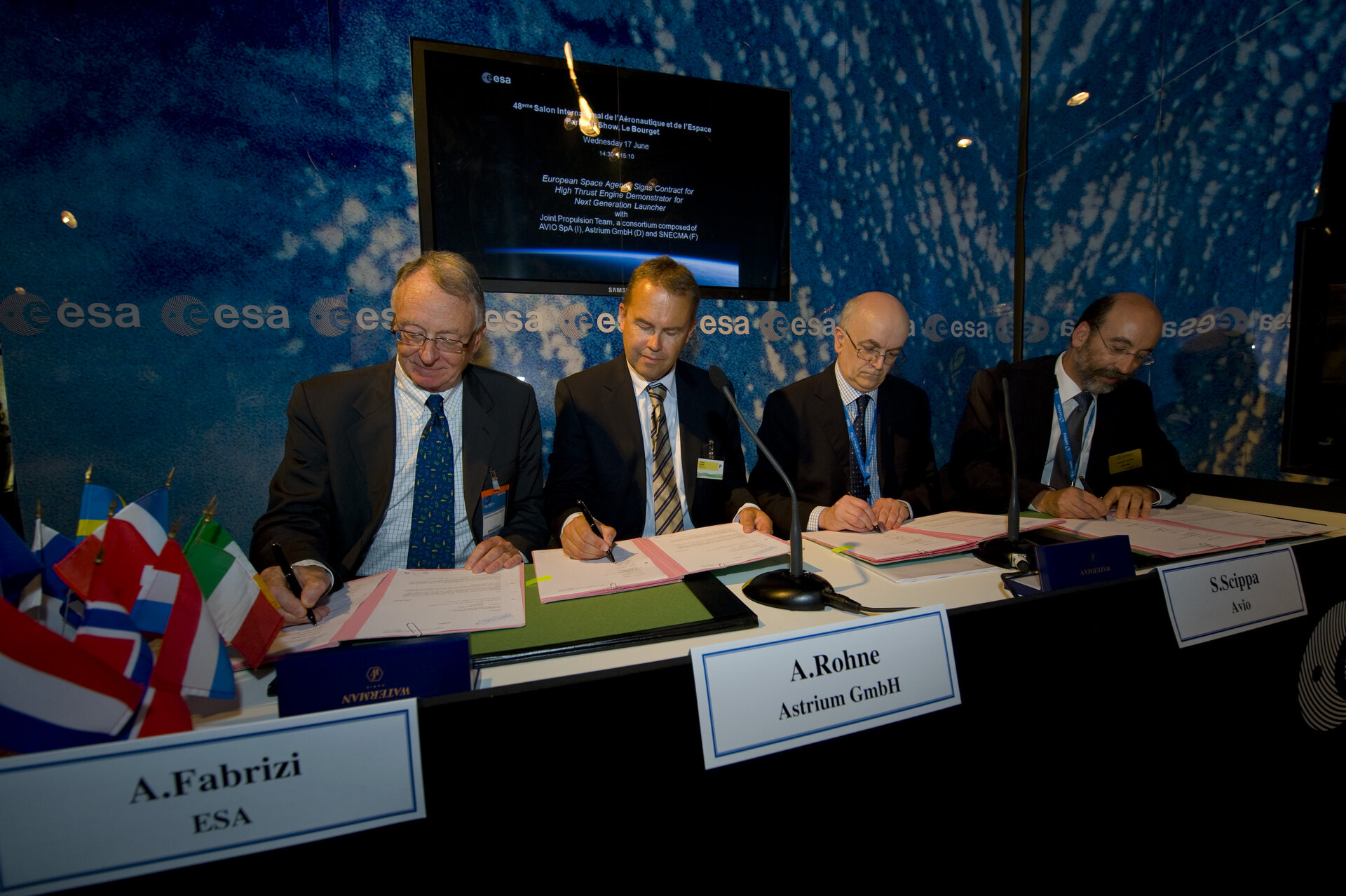 Today at the Paris Air Show being held at Le Bourget, ESA signed a €20 million contract rider with the Joint Propulsion Team consortium composed of Avio SpA (I), Astrium GmbH (D) and Snecma (Groupe SAFRAN) (F), for the development of the future liquid engine demonstrator for the European Next Generation Launcher first stage, the High Thrust Engine Demonstrator.

The contract, for which activities started in 2007, has a total value of more than €33 million and integrates key European competence from 14 companies in 9 countries. It will cover industrial activities of ESA’s Future Launchers Preparatory Programme (FLPP) Period 2, until mid-2010.

“The High Thrust Engine Demonstrator Project has already delivered significant technological achievements, including several European ‘firsts’. It will prepare key technical and programmatic data for the ESA Ministerial Conference in 2011 and beyond. Industry will assess the different technologies Europe will be adopting for the development of a main propulsion system for the Next Generation Launcher intended to enter service in 2020–2025”, said Jérôme Breteau, ESA’s Propulsion Project Manager.

Liquid propulsion has been selected for main stage propulsion trade-offs because of its flexibility, growth potential and proven record. The project encompasses a complete set of technology activities on advanced subsystems, to meet ambitious objectives in terms of cost and reliability. In parallel, integrated system demonstrator studies are being performed, aiming at selecting the reference design by mid-2010 and progressing towards the hot-firing test of a mid-scale engine demonstrator around 2014, which could also evolve into a pre-development phase.

“Building on the excellence of the propulsion competence of the entire European propulsion industrial team of the ESA Future Launchers Preparatory Programme, this contract will allow a significant step forward for Europe’s advanced liquid propulsion capabilities and will enable a shared assessment of our options for the European Next Generation Launcher system.” underlined Antonio Fabrizi, ESA Director of Launchers.