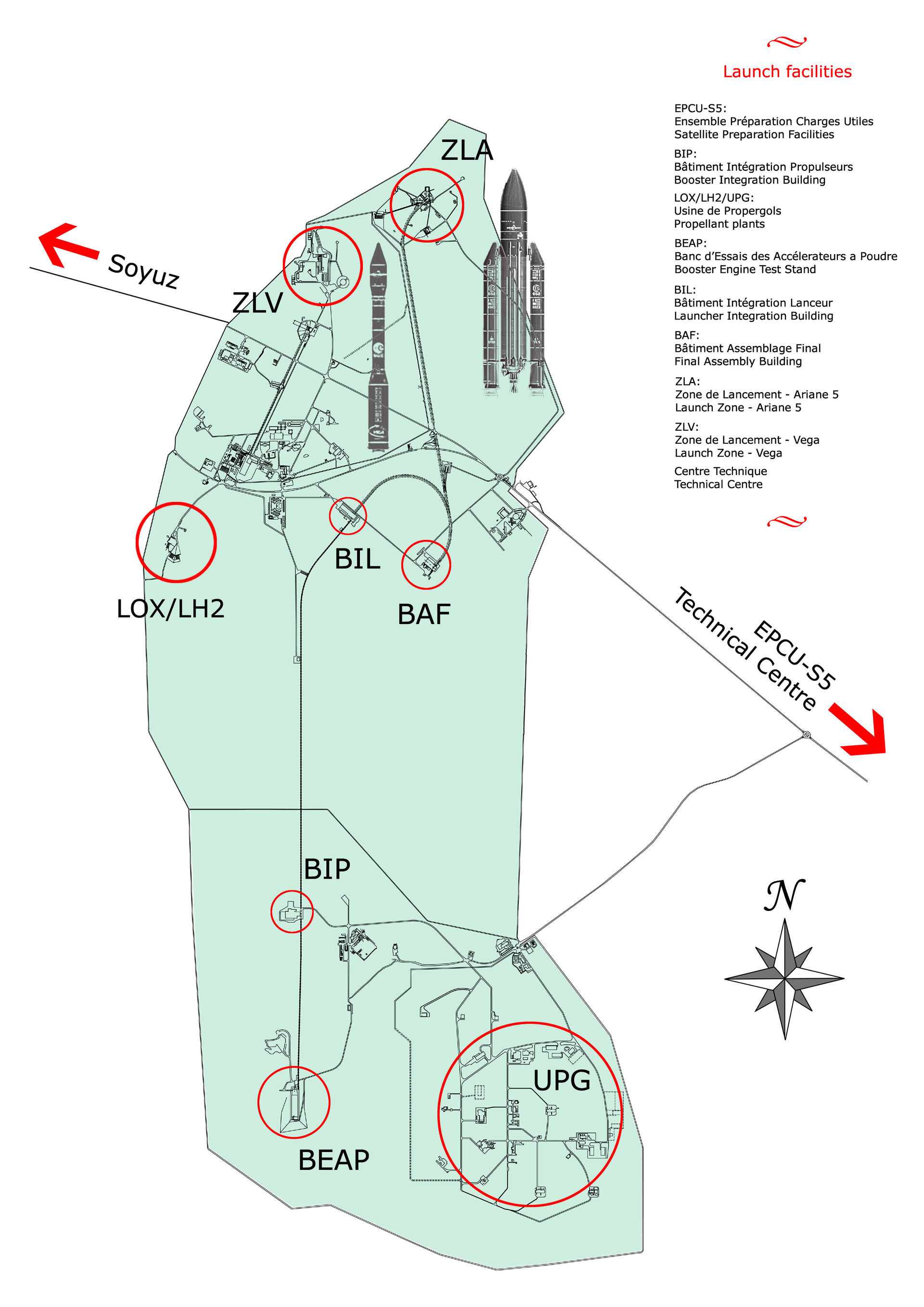 Europe's Spaceport covers 700 km2 of land dedicated to European space activities, but facilities cover less than 10 percent of this territory. It is surrounded on two sides by equatorial forest, to the east it has a 50 km coastline bordering the Atlantic Ocean and to the south lies the town of Kourou.

The Spaceport contains the administrative buildings as well as the numerous facilities required for a launch. Work is almost complete in preparing facilities for Ariane 6, scheduled for liftoff in 2020. Facilities have also being adapted for Vega-C, which will be operational from 2020.

This centre, situated in the Jupiter building about 12 km away from the Ariane launch pad, receives all the information regarding the launches of Ariane 5, Vega and Soyuz. Final countdown takes place here and the flights are closely monitored until the satellite(s) have been accurately placed in the correct orbit.

On the day of a launch, all the team carry out their well-defined roles with precision. The decision to launch is taken by the Flight Director from Arianespace, providing all the information on the status of the launcher, the satellite(s) and the meteorological conditions at the launch pad is satisfactory.

Authorisation to launch is given by the CNES/CSG Director, once all the technical components at the launch base are declared to be operational and all the stringent safety requirements have been met.

The Director of Operations is responsible for coordinating the launch sequence and for the final countdown. As soon as all the lights on the control board turn green he or she announces décollage to start the automatic 7-minute final launch sequence. After liftoff the Director of Operations provides information on the status of the main automatically initiated events, such as the separation of the boosters and the ignition of the upper stage.

As soon as the satellite(s) on board the launcher are correctly deployed in space, the Director of Operations can announce that the mission has been successfully completed.

This complex is made available to the satellite clients of Europe’s Spaceport to enable them to test and to prepare satellites for their journey into space.

Once, the satellite client considers its satellite ready for launch, it is carefully driven to the Final Assembly Building to be covered by the fairing and mounted on the launcher.

The launcher is monitored from the Launcher Control Centre. During a launch campaign the team working at the centre use sophisticated computer applications to control the fluid and electric systems of the launcher. The Centre is located relatively close to the launch pad and designed to provide a safe environment for the launch team during the launch.

On launch day a team of 150 people are at the centre to carry out the final checks and controls prior to liftoff. Once the green light is given, signifying that everything is working correctly on the launcher, the last seven minutes of the final synchronized countdown begins. From that moment on, the process is fully automatic and no further human intervention is possible.

In this plant the solid propellant for the Ariane-5 and Vega first stage boosters are produced then the boosters are filled. The Ariane-5 boosters arrive from Europe in three parts: the cylindrical central and aft segments, and the forward nose. The two central and aft segments are cleaned and coated using a special procedure before being assembled and filled with 107 tonnes of solid propellant. The forward segment arrives from Italy fully loaded with propellant.

The propellant plant is located in French Guiana to avoid hazardous transportation of the large Ariane-5 boosters by ship. It is highly automated and one of the few plants in the world with such a high-load capacity.

Regulus, a Franco-Italian company, is responsible for operating the Guiana Propellant Plant facilities.

At the test stand the powerful engines used to propel a launcher into space are put through numerous tests to ensure they are working correctly.

The Ariane 5 and Vega first stage boosters are assembled in this 55-m high building that contains an air-conditioned work area of 130 000 m3. Once ready, the complete Ariane 5 booster, weighing around 270 tonnes, is transferred to the Booster Storage Building until needed either for integration in an Ariane 5 launcher or for a test firing at the Booster Test Engine Stand.

The Franco-Italian company Europropulsion is in charge of operating the Booster Integration Building facilities.

Ariane 5's lower composite - the launcher without the fairing - is integrated and tested in the 58-m high Launcher Integration Building.

First, the main central stage is erected on the launch table. Then, the two solid boosters are fitted to the main stage, supporting it on either side. Finally, the vehicle equipment bay and the upper stage are added on the top.

The next step is to check all the electrical systems and to test the entire launcher to ensure that no leakage can take place. If the test results confirm perfect functioning then the lower composite of the launcher is moved along a rail track on its mobile launch table to the Final Assembly Building.

The launch table weighs 870 tonnes and is fitted with a two-part umbilical mast that housing the fluid and electrical terminals that interface with the launcher.

In the 90-m high Final Assembly Building, Ariane 5's upper composite consisting of one or two satellites inside the Ariane fairing, is assembled on top of the lower composite to make a complete launcher. This takes about 12 days.

Before being mounted on the main body of the launcher the upper composite is thoroughly checked. Once the checks are completed the upper stage and the attitude control system are filled with propellant. Finally the Ariane 5 is ready to roll out to the launch pad on its mobile launch platform.

The launcher takes around one and half hours to make the 5-km journey from the Final Assembly Building to the launch zone. The 52-m tall launcher, together with its launch platform, weighs around 1500 tonnes. It is pulled slowly along the rail track by a tractor, at a speed of around 3.5 km/hour.

On arriving at the launch zone the launcher is placed over a concrete foundation containing three flame trenches: one for the Vulcain engine and one for each booster. Feed lines for liquid oxygen and liquid hydrogen are hooked up to the main stage via connectors under the launch table, together with connections to the umbilical mast.

Next to the launch pad is a 90-m high water tower containing 1500 m3 of water. This is poured onto the launch table during liftoff at the rate of 30 m3 per second, to help reduce noise, and cool the table and the trenches.

Around the launch pad are four 80-m tall lightening rods as well as a metal tower fitted with baffles to help protect the launcher from air turbulence.

Vega is integrated and assembled in a mobile gantry. The Ariane and Vega Launch Control Centre share the same building. This enables optimum synergy between highly experienced operational teams.

The LH2 and the LOX plants produce and store the liquid hydrogen and liquid oxygen needed to fuel the launcher’s engines.

The LOX plant liquefies air to produce liquid oxygen and liquid nitrogen. Liquid oxygen is stored in five mobile tanks, each with a capacity of 20 m3. The liquid hydrogen and liquid nitrogen are kept at a temperature of -253oC and -183oC respectively, Together they provide the propellant for the launcher’s engine and guarantee the immense thrust that an Ariane 5 requires to liftoff.

The French company Air Liquide operates both LH2 and LOX.