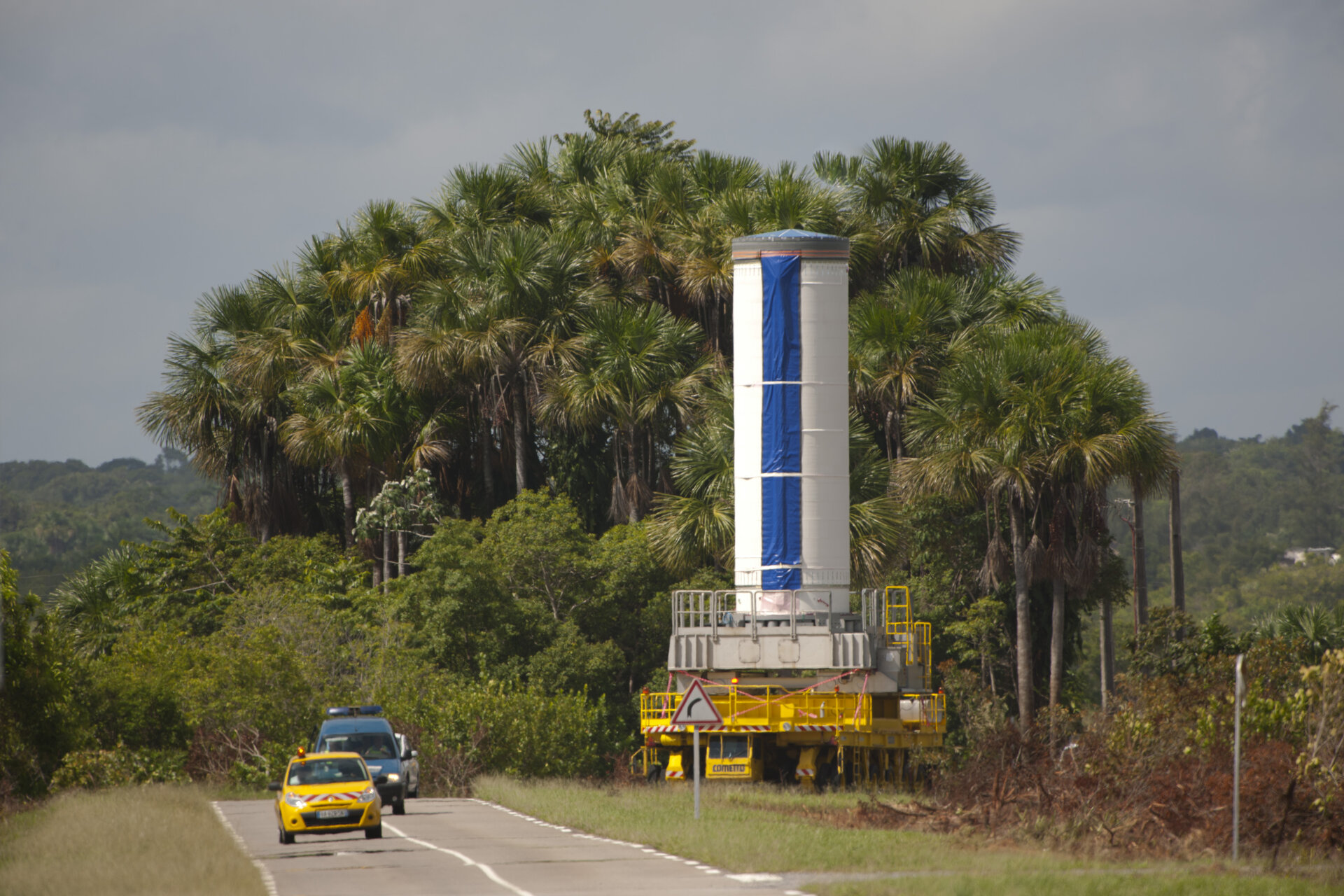 The first Vega launch campaign began on Monday at Europe’s Spaceport in French Guiana with the installation of the first stage on the pad. Europe’s new small launcher is on track for its maiden flight at the end of January.

The hundred-tonne solid-propellant first stage, the P80, was moved from the Booster Integration Building to the pad on 7 November using the ‘Fardier’ heavyweight transporter.

As with the transfer of Ariane 5’s boosters, safety measures minimised the number of operators on site and evacuated nearby buildings.

With the P80 installed inside the mobile gantry, all ground installations are now being configured for the booster’s final acceptance, including the Thrust Vector Control system that swivels the large nozzle for steering.

In the coming weeks, the two solid-propellant second and third stages, the Zefiro-23 and Zefiro-9, will be transferred from the Vega Booster Storage and Preparation Building and added to the vehicle.

Before the end of the year, after the Flight Readiness Review, the AVUM – Attitude & Vernier Upper Module – fourth stage, will be integrated.

In parallel to the launcher activities, the satellites are being prepared at the spaceport.

By the end of the year the LARES laser relativity satellite from Italy’s ASI space agency together with at least six small CubeSats and ALMASat-1 from European universities will be ready and enclosed in the fairing.

The campaign will continue in January with the integration of the ‘upper composite’ – the fairing and payload – followed by final check-out of the fully integrated launcher and the countdown rehearsal.

This Vega qualification flight will pave the way for the next five missions that will demonstrate the system’s flexibility as part of the VERTA – Vega Research and Technology Accompaniment – programme.

Vega is designed to cope with a wide range of missions and payload configurations in order to respond to different market opportunities with greater flexibility.

ELV SpA is the launch vehicle industrial prime contractor (70% of which is owned by AvioSpA and 30% by the Italian space agency, ASI) and Vitrociset is the ground segment prime contractor.