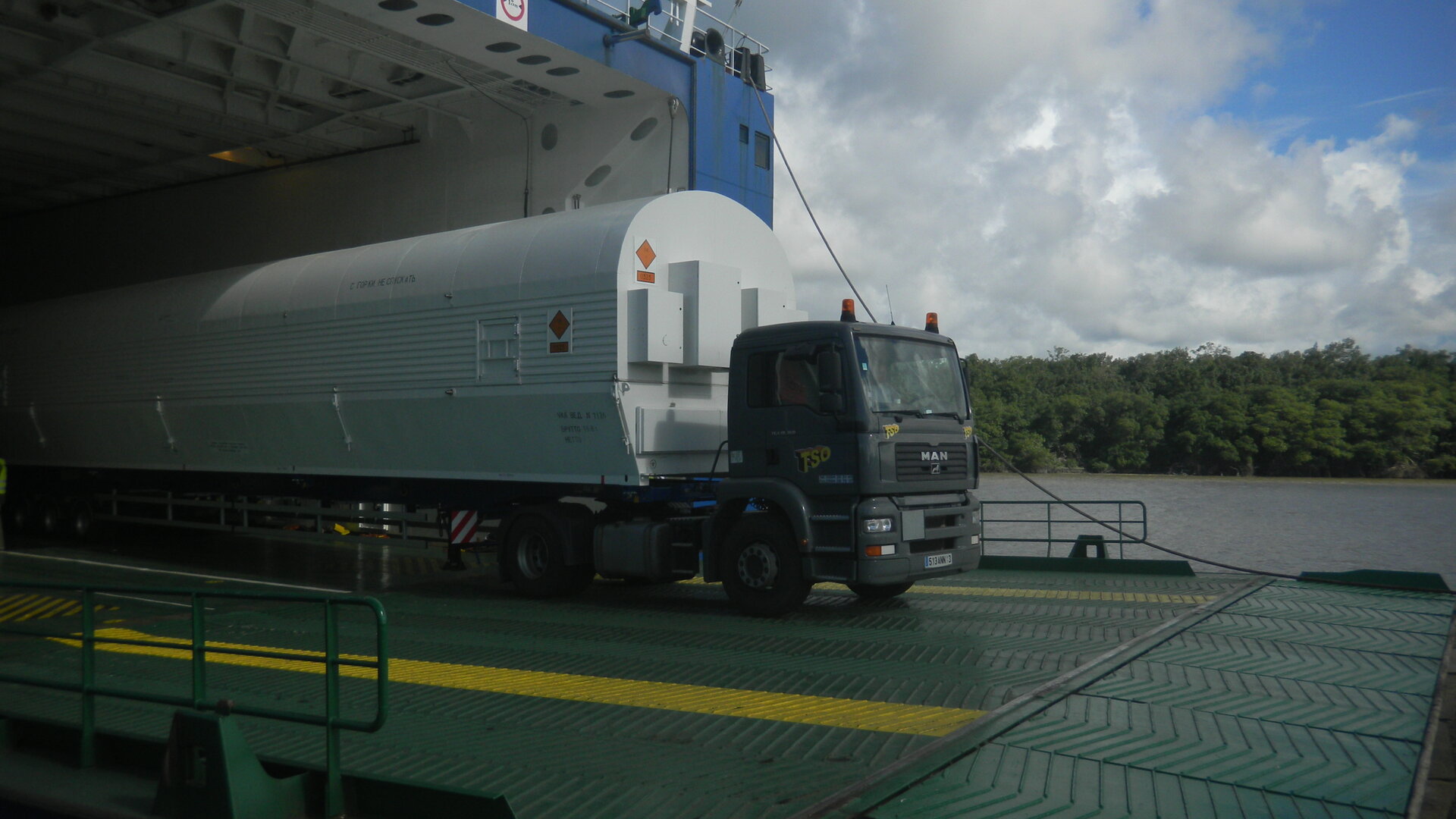 The two Soyuz launchers that will fly the first four satellites of Europe’s Galileo navigation system into orbit have arrived at Kourou harbour in French Guiana, completing a journey that took them halfway round the world.

The first two Galileo In Orbit Validation satellites are set to be launched from Europe’s Spaceport on 20 October, with two more following them into orbit by mid-2012.

The October launch will be the first flight of a Soyuz rocket from French Guiana.

The two Soyuz ST-B launchers and their Fregat-MT upper stages were carried across the Atlantic aboard Arianespace vessel MN Colibri, arriving on 18 June.

The rocket hardware left by train from the Soyuz manufacturing plant in Samara, Russia and the Fregat factory in Moscow to St Petersburg harbour, where it was loaded for shipment, leaving on 3 June for French Guiana.

The next step will be the Launcher Flight Readiness Review, due to take place on 21 July. Authorisation will then be given to begin assembling the rocket hardware and deployingthe initial Soyuz ST-B launcher for the first Galileo campaign.

The first two Galileo satellites – known as PFM and FM2, for Protoflight Model and Flight Model 2 – are currently undergoing their final qualification and acceptance tests at Thales Alenia Space in Rome, Italy.

Once Satellite Flight Readiness Review has given the green light, both satellites and their ground equipment and launch teams will arrive at the beginning of September for the launch campaign.

Other Soyuz hardware is already in storage at Kourou but only the combination of Soyuz ST-B and Fregat-MT was up to the demanding task of conveying the Galileo satellites into their circular 23 222 km orbits.

A European dispenser will hold the satellites in place as they share their ride to orbit, and then release them into their final orbits.

Baseline versions of the reignitable Fregat were previously employed to deliver ESA’s GIOVE-A and -B experimental satellites in 2006 and 2008, which secured the rights to Galileo’s radio frequencies. Fregat-MT carries an additional 900 kg of propellants for its double-satellite load.

October’s launch will be a historic occasion, the first time that a Soyuz launcher lifts off from a spaceport other than Baikonur in Kazakhstan or Plesetsk in Russia.

Because French Guiana is so close to the equator each launch will benefit from Earth’s spin, increasing the maximum payload to geostationary transfer orbit from 1.7 tonnes to three tonnes. As a medium-class launcher, Soyuz will complement Ariane and Vega to enhance the flexibility and competitiveness of Europe’s launcher family.

Each three-stage rocket will be assembled horizontally in the traditional Russian manner, transferred to the launch site and moved to the vertical so that its payload can be mated onto it from above. A new mobile launch gantry enables this process, while protecting the satellites and the launcher from the humid tropical environment.

These first four Galileo satellites will form the operational nucleus of the full Galileo satnav constellation.

They are fully representative of the others that will follow them into orbit, combining the best atomic clock ever flown for navigation – accurate to one second in three million years – with a powerful transmitter to broadcast precise navigation data worldwide.