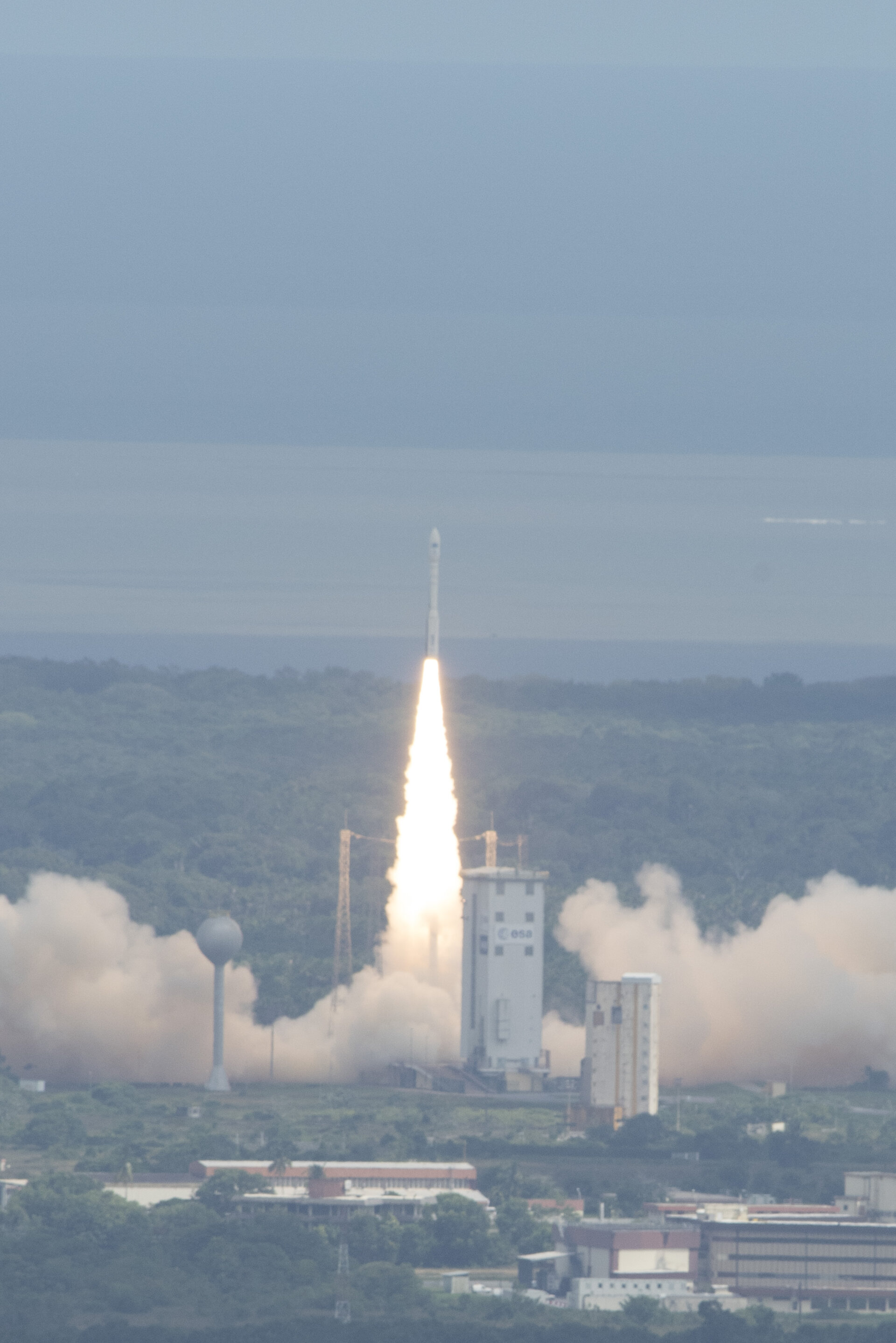 An experimental vehicle to develop an autonomous European reentry capability for future reusable space transportation has completed its mission. ESA’s Intermediate eXperimental Vehicle flew a flawless reentry and splashed down in the Pacific Ocean just west of the Galapagos islands.

The IXV spaceplane lifted off at 13:40 GMT (14:40 CET, 10:40 local time) on 11 February from Europe’s Spaceport in Kourou, French Guiana atop a Vega rocket. It separated from Vega at an altitude of 340 km and continued up to 412 km. Reentering from this suborbital path, it recorded a vast amount of data from more than 300 advanced and conventional sensors.

As it descended, the five-metre-long, two-tonne craft manoeuvred to decelerate from hypersonic to supersonic speed. The entry speed of 7.5 km/s at an altitude of 120 km created the same conditions as those for a vehicle returning from low Earth orbit.

IXV glided through the atmosphere before parachutes deployed to slow the descent further for a safe splashdown in the Pacific Ocean.

The Mission Control Centre at the ALTEC Advanced Logistics Technology Engineering Centre in Turin, Italy, closely monitored IXV during the mission, receiving flight and instrument data from the entire ground network, including the fixed ground stations in Libreville (Gabon) and Malindi (Kenya), and the station on the Nos Aries recovery ship in the Pacific.

Balloons are now keeping IXV afloat while the recovery vessel hurries to pick it up. It will be returned to Europe for detailed analysis in ESA’s technical centre, ESTEC, in the Netherlands.

Mastering reentry will open a new chapter for ESA. Such a capability is a cornerstone for reusable launcher stages, sample return from other planets and crew return from space, as well as for future Earth observation, microgravity research, satellite servicing and disposal missions.

The initial results from the flight are expected to be released in around six weeks.

The results will feed the Programme for Reusable In-Orbit Demonstrator for Europe, or Pride, which is being studied under funding decided at ESA’s last two Ministerial Councils. The reusable Pride spaceplane would be launched on Europe’s Vega light rocket, orbit and land automatically on a runway.

“ESA and its Member States, together with European space industry, are now ready to take up new challenges in several fields of space transportation, in future launchers, robotic exploration or human spaceflight.”

“This mission will teach us a lot about the technologies we need to apply in new launch systems, in particular when we think about reusable systems,” notes Gaele Winters, ESA Director of Launchers.

“The cutting-edge technology we validated today, and the data gathered from the sensors aboard IXV, will open numerous opportunities for Europe to develop ambitious plans in space transportation for a multitude of applications.”

ESA will provide footage of the recovery when it is available from the ship in the Pacific Ocean.

Still pictures will be made available at:
http://www.esa.int/spaceinimages/Missions/IXV

Launch highlights will be posted on ESA TV FTP server within an hour after the end of the video transmission.
Server: tvdownload.esa.int
Login: esa
Password: ftp4esa

The launch also allowed the new Vega rocket to show its impressive capabilities, and to confirm its flexibility for a wide range of missions.

Since its introduction in 2012, the launcher has reduced operational costs and delivered its first commercial customers into orbit, as well as demonstrating numerous capabilities such as dual payloads and different orbits.

Today’s mission was the first Vega payload to require an equatorial launch trajectory, instead of travelling northwards as on previous missions. It was also the heaviest payload so far.

Operated from French Guiana, the vehicle’s costs are minimised by the simplicity of its design and operational concept, the use of advanced technologies and the synergy with existing Ariane production facilities.

At the ESA Council at Ministerial level in December 2014, funds were approved for supporting exploitation as well as for developing an upgraded design, known as Vega C, which will improve performance and increase synergies by sharing the first stage with the new Ariane 6 heavy launcher to reduce recurring costs. Vega C will make its maiden flight in 2018.

ESA was responsible for developing the launcher and is responsible for the current Vega Research and Technology Accompaniment, or Verta, programme that is demonstrating the vehicle’s versatility and flexibility.

The vehicle’s prime contractor is ELV, a joint venture of Italy’s ASI space agency and Avio.

Learn more about Vega at http://www.esa.int/Our_Activities/Launchers/Launch_vehicles/Vega