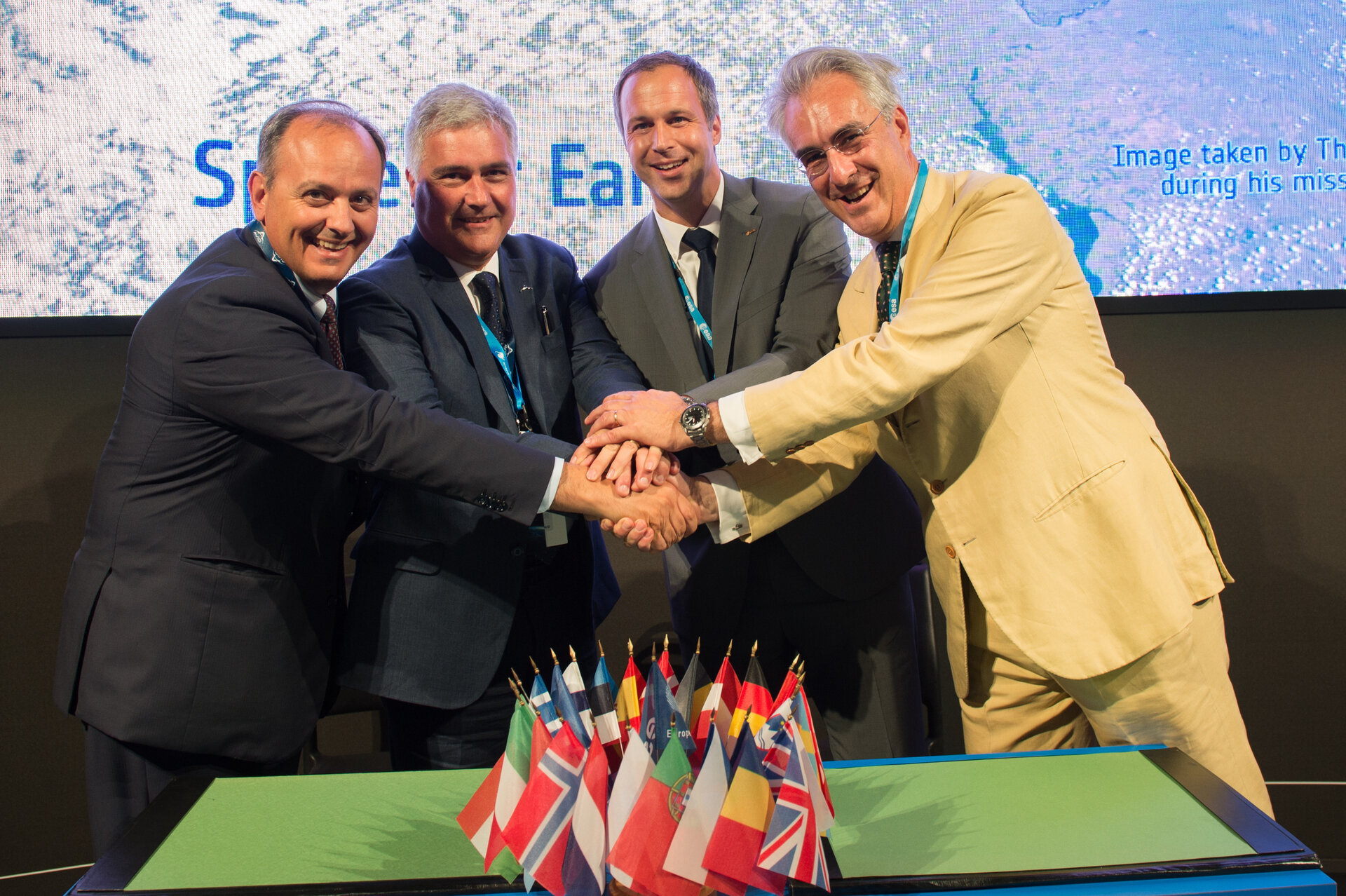 ESA Director of Space Transportation, Daniel Neuenschwander, signed five contracts with industry at the Paris Air and Space show in France this week.

“Five contracts, one goal: to consolidate space transportation services and capacities for the benefit of Europe’s competitiveness,” he commented.

Vega and Vega-C are expected to capture a significant portion of the launch market through extended capability to deploy multiple light satellites below 500 kg using the new versatile Small Satellites Mission Service dispenser.

The contract, signed on 20 June between ESA and ELV SpA at Le Bourget, brings the work up to completion next year with launch on the Vega proof-of-concept flight scheduled in 2018, as well as the detailed design and process activities for the configuration planned for Vega-C.

The contract for the development of a more powerful small launcher, Vega-C, was signed between ESA and ELV SpA, the industrial prime contractor, in August 2015.

An upgrade of Vega-C was approved by the ESA participating states at the Ministerial Conference in December 2016. The additional performance, improved avionics and mission flexibility and expanded fairing volume can capture a wider market of satellites up to 2.2 t in the reference 700 km polar orbit.

It involves further adaptation of the ground segment, which is closely linked with the launcher system design, integration and operation.

ESA and ELV SpA concluded negotiations for the upgrades of the Vega-C development up to completion, and both parties signed a letter of intent on 20 June at le Bourget for the Contract Change once the Industrial Policy Committee approves the ESA Proposal in its next meeting, planned for 27–28 June.

Today, ESA and Airbus Safran Launchers, the industrial prime contractor for Ariane 5 ECA, signed a contract for additional complementary development activities that will increase the launcher’s performance up to 10.2 t net payload in geostationary orbit by 2019.

Dual launches could accommodate one big satellite in the range 6.0–6.5 t and a small satellite of up to 3.5–3.7 t, at less cost, made possible through larger upper stage propellant tanks and a lighter Vehicle Equipment Bay.

The James Webb Space Telescope is a collaborative project between NASA, ESA and the Canadian Space Agency.

Today, ESA signed a contract with Ariane 5 prime contactor Airbus Safran Launchers for dedicated engineering and qualification activities that enable the launcher to carry the payload to the L2 Lagrange Point in October 2018.

The methane reusable engine precursor in the thrust class 1000 kN will be ground tested in 2020 for use on future versions of the European launcher family, after Ariane 6 and Vega-C. Next-generation launch vehicles require a factor 10 reduction in recurrent costs of propulsion systems compared to current cryogenic engines. New propellants, the systematic application of design-to-cost approach and innovative manufacturing technologies will also be applied.

The project can derive and provide significant synergies with other propulsion demonstration projects within ESA’s Future Launchers Preparatory Programme, national agencies and industry.