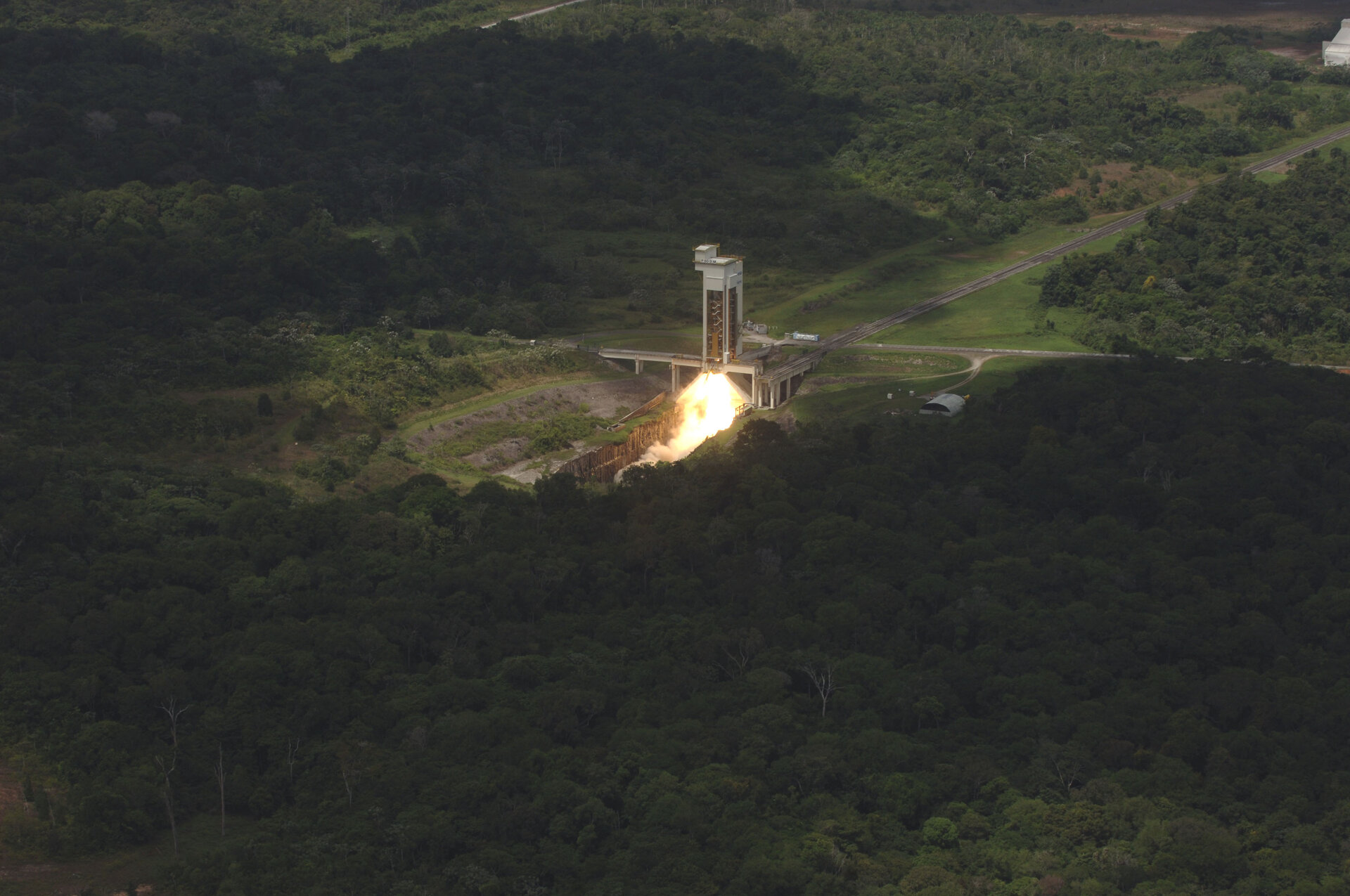 The P80 motor - which will power the first stage of ESA’s Vega launch vehicle - delivered a mean thrust of about 190 tonnes for over 100 seconds, representing roughly one third of the thrust delivered by each of Ariane 5’s solid booster stages (EAPs). A peak of 250 tonnes was reached 7 seconds into the test.

“The first data we have at hand show that the firing closely followed the predicted pressure curve” said Antonio, Fabrizi, ESA’s Director of Launchers. “ This event concludes the first set of development tests conducted for the Vega launcher in 2006, a very intensive and successful year for the Programme. This excellent result marks a milestone that contributes significantly to further increasing confidence in the Vega launcher, the exploitation of which is currently being prepared by Arianespace following the signature of a Convention with ESA in November this year.”

“Among the various features of the P80 programme, beyond the technical achievements and the innovation involved, it is important to underline the remarkable contribution in terms of industrial investment, made possible by the expectations of a successful exploitation of the Vega launcher,” added Fabrizi.

More than 600 parameters were recorded in the course of the firing test to check that the many new technologies introduced in this motor performed as intended.

Based on the industrial capability acquired with the three-segment Solid Rocket Motor powering Ariane 5’s EAP and about the size of one of their lower segments, the P80 motor features many new developments which might later be used on Europe’s workhorse heavy launcher to improve its performance in terms of capabilities and cost.

About 12 m high and 3 m in diameter, the P80 motor is loaded with 88 tons of solid propellant. Unlike previous motors of this size or larger developed in Europe or in the rest of the world, it is made of a single propellant segment instead of several segments cast separately before being assembled together.

Taking advantage of its common dimensions, the propellant casting was carried out at the Guiana Propellant Plant (UPG) in Kourou, in the same pit as the 100-tonne lower segments of Ariane 5’s EAPs. However, instead of the EAP’s stainless steel outer structure, P80 has a lightweight filament-wound composite casing. It also incorporates a newly simplified design of igniter with a carbon fibre structure.

A new composite steerable nozzle was developed, with a simplified architecture made of fewer elements to reduce production costs. It also includes complex-formed cast metal parts and a new thermal insulation material. The nozzle joint was made more flexible than on previous models to facilitate thrust vector control through electromechanical actuators. This is an additional technology improvement on a motor of that size, as they usually rely on a more complex hydraulic system.

“As expected, the P80 withstood high combustion pressure, of above 80 bars,” commented Stefano Bianchi, Vega Programme manager at ESA. “Despite this highly demanding environment, it apparently performed perfectly, although we’ll need some more time to fully analyse the vast amount of data we have just collected.”

Today’s test was performed on the solid booster test stand (BEAP) in Kourou, the same facility used for firing tests on Ariane 5’s EAPs. The motor will now be disassembled for detailed analysis. Some of its parts, such as the nozzle, will be returned to Europe.

The P80 is developed both as Vega’s first stage and as a technology demonstrator under a specific ESA programme managed by an integrated project team led by CNES, the French space agency, with an industrial team led by the French-Italian joint-venture Europropulsion, under delegation from Avio SpA of Italy. Among the main industrial subcontractors involved in the P80 are SABCA of Belgium (thrust vector control system), Snecma Propulsion Solide of France (nozzle) and APP of the Netherlands (igniter).

This was the first of two firings for the P80. A second test is tentatively planned by mid 2007. Additional test firings of the Zefiro 23 and then the Zefiro 9 motors – which will power Vega’s second and third stages - are also scheduled in 2007. This P80 firing test is a major achievement for the Vega Programme, as well as for solid propulsion capability in Europe and completes the series of major Vega milestones planned and completed in 2006. This demonstrates the programme maturity and allows to perform the final consolidation of the planning for the remaining activities, clearing the way to the Vega maiden flight in 2008.

Vega is designed to lift single or multiple payloads to orbits of up to 1,500 km in altitude. Its baseline payload capability is about 1,500 kg to a circular 700-km-high sun-synchronous orbit but it can also loft satellites ranging from 300 kg to more than 2 tonnes, as well as piggybacking microsatellites. This range of performance covers the needs for multiple applications in the fields of remote sensing, environmental monitoring, Earth science, space science, fundamental science and research and technology for future space applications and systems. Once qualified, Vega will be marketed and operated by Arianespace at the Guiana Space Centre , as a complement to Ariane 5 and Soyuz, and will address the small to mid-sized satellite launch market.