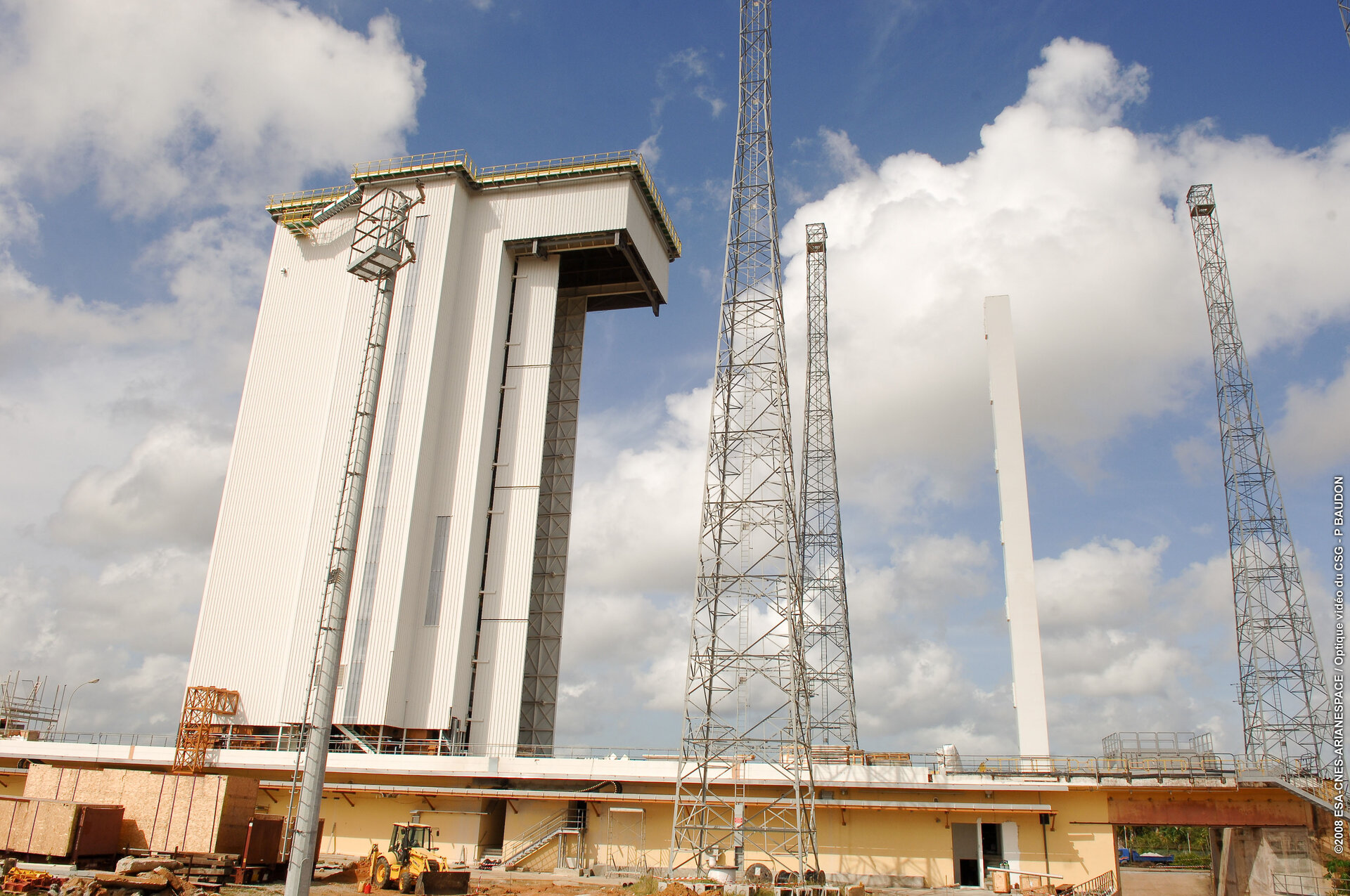 The Vega mobile gantry, inside which Europe’s new, small launch vehicle will be integrated and tested, successfully completed its first movement tests earlier this month at Europe’s spaceport in Kourou, French Guiana.

As with Ariane launchers prior to Ariane 5, Vega is assembled and tested on its launch pad. The launcher preparation takes place inside a mobile gantry that houses all the support equipment needed to assemble and check the launcher. The gantry is moved back from the pad a few hours before launch.

Vega will lift off from the former Ariane 1 launch platform (Ensemble de Lancement Ariane 1 – ELA1), which is approaching the completion of its refurbishment programme.

The Vega mobile gantry made its first short journeys on the former ELA1 during the afternoon and early morning of Friday 14 and Saturday 15 November 2008. These test movements took place almost 29 years after the first launch from ELA1 and some 19 years after the last Ariane 3 lift off, inaugurating a new era for this venerable launch pad.

This move of the high structure, which weighs over 1000 tonnes, was the first post-integration check of the hydraulic system that drives the wheels that position the gantry. The objective was to perform a preliminary evaluation of the system behaviour during motion. The moves were limited to a maximum displacement of five metres.

A complete movement test will be performed before the end of 2008, with a comprehensive performance check along the 80-metre rail track running on top of the ELA1 launch platform, or bunker.

The test results revealed a smooth movement of the mobile gantry. The positioning error was close to zero and the reactivity to the operator’s actions very high, thanks to the user-friendliness of the joystick that controls the movement. The capability of the system to provide the required movement speeds (ranging from one to five metres/minute) was proven. Tests relating to end-stop switch and speed switch activation, emergency stop operation, braking capability, and other important functions were also successful.

The horizontal movement system of the mobile gantry is powered by two electric motors of some 70 kW capacity, for 100% redundancy. These operate the hydraulic pumps supplying pressurised oil to the six motorised wheels (two on the north side and four on south side). The system has to be able to move a total mass of 1300 tonnes with a maximum wind speed during operation of 23 m/s (just over 80 km/h).

Both the structure and the translation system of the mobile gantry are under the responsibility of Rheinmetall (Italy), mechanical subcontractor to the Vega Ground Segment Prime Contractor, Vitrociset (Italy).

Vega is a single-body launcher composed of three solid-propellant stages and a liquid-propellant upper module. It is approximately 30 m high, and weighs a total of 137 tonnes at lift-off. The reference mission for Vega’s launch capacity is to carry 1500 kg into a 700km-altitude polar orbit, but Vega will be able to launch a wide range of scientific and Earth-observation missions.

The Vega launcher qualification flight is scheduled to take place before the end of 2009.