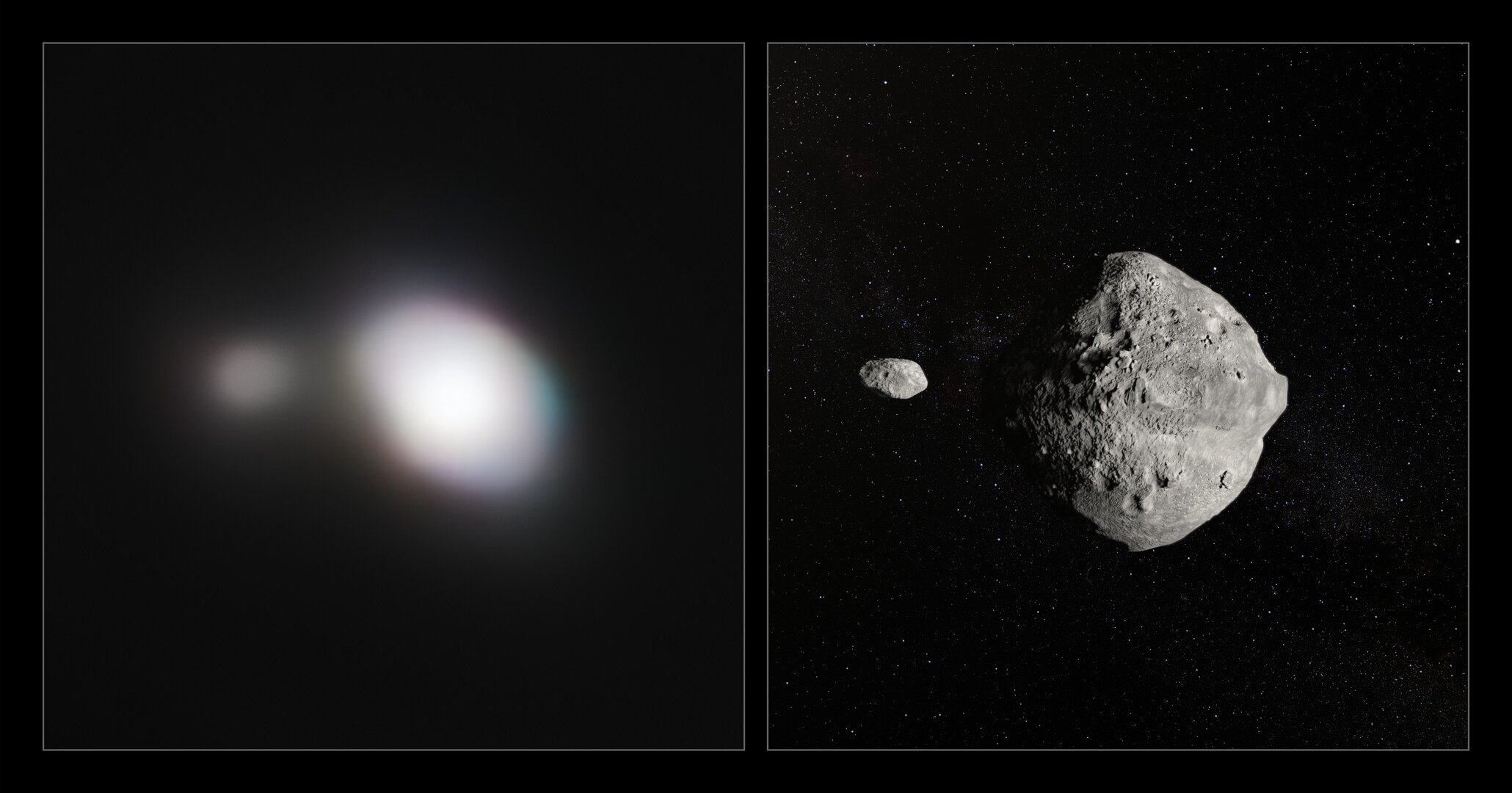 Humankind has had its closest look yet at a binary asteroid. As 1999 KW4 skimmed past our planet at 70 000 km/h, the most advanced visible-light telescope on Earth resolved the 1.3-km diameter asteroid and its 360-m sized moon. An even closer spacecraft-based encounter will come next decade, when NASA will send a probe to deflect the moon of the distant Didymos binary. Then ESA’s Hera mission will perform a follow-up survey right down to the body’s surface.

The International Asteroid Warning Network (IAWN) coordinated a cross-organisational observing campaign of the asteroid 1999 KW4 as it flew by Earth, reaching a minimum distance of 5.2 million km on 25 May. Since its orbit is well known, scientists were able to predict this flyby and prepare the observing campaign.

The European Southern Observatory joined in with its flagship Very Large Telescope (VLT) atop Mount Paranal in Chile, made up of four 8.2-m diameter main mirrors. The VLT’s SPHERE instrument (Spectro-Polarimetric High-contrast Exoplanet Research) – equipped with adaptive optics to overcome atmospheric distortion, and normally used to survey exoplanets – was able to produce images sharp enough to distinguish the two components of 1999 KW4, which are separated by about 2.6 km.

The IAWN campaign is the latest chapter in the brief history of binary asteroid science. A quarter of a century ago the idea that asteroids might have their own moons remained in the realm of science fiction. There had been unconfirmed claims of sightings and some anomalous ‘lightcurves’ – gradual patterns of light shifts which are used to derive details of very distant objects.

In the end it took another close encounter to prove the existence of binary asteroids. On 28 August 1993, NASA’s Galileo probe to Jupiter performed a flyby of the Ida asteroid within the main Asteroid Belt. A failure of the spacecraft’s high-gain antenna meant the resulting data, adding up to about 95% of the 31.4-km diameter body’s surface, took a month to be relayed back to Earth.

Planetary scientists studying the imagery over the following weeks found the spacecraft had been imaging not one asteroid but two. Ida possesses a tiny egg-shaped moon that was named Dactyl. At about 1.3 km across it is less than one twentieth its parent body’s size, separated by a distance of 90 km.

Once the concept of binary asteroids was proven, many more were found using lightcurves or radar surveys. Today around 15% of asteroids are believed to be double (or triple) asteroid systems. Parallel discoveries have also been made on the ground, with ‘doublet’ impact craters caused by binary impacts – such as the adjacent Nördlinger Ries and Steinheim craters in Bavaria, Germany – along with others spotted on Mars and Venus.

Meanwhile, scientists pondered binary asteroids’ origins. While the formation of asteroid satellites has been shown to be a natural outcome of large asteroid disruptions – during which some fragments are ejected and remain bound together – the majority of smaller asteroids are believed to have another origin.

Many of these bodies have a ‘rubble pile’ composition. This has inspired a theory that gradual increases in their rotation due to the warming of sunlight could actually lead to matter being thrown out into space by centrifugal force, some of it remaining bound to the central body, accordingly forming into a natural satellite.

Other researchers grasped a valuable operational opportunity. Due to the relatively small masses and gravities of the bodies involved, the smaller asteroids orbit their parents at comparatively low velocity, less than a metre per second. This opened up the possibility that it might be feasible to shift the orbit of one of these asteroid moons in a measurable way – something which would not be achievable so precisely with a lone asteroid in a much more rapidly moving solar orbit.

So while the first mission study, Don Quijote, to deflect an asteroid considered a single body, when the concept was internationalised through the Asteroid Impact & Deflection Assessment (AIDA) mission the target shifted to a binary. First, in 2022, NASA’s DART, Double Asteroid Redirect Test, spacecraft will impact the smaller of the two Didymos asteroids.

Then in 2026 comes ESA’s Hera mission to perform a close-up survey, measuring the mass of the deflected asteroid and measuring the size of the crater left by DART’s impact. The scale of the orbital shift caused by DART should be large enough to be measured using Earth telescopes immediately after the impact, but missing crucial data to be gathered by Hera should turn planetary deflection into a well understood technique – ready for use in a genuine case of need to defend Earth.

A near-Earth asteroid system, Didymos has similarities to 1999 KW4 but is smaller in scale: its main body measures 780 m across, just more than double the size of 1999 KW4’s moon, with its own moonlet a mere 160 m across.

The VLT used to resolve the 1999 KWT pair was a few months earlier among multiple European and American telescopes employed to gather precious details of the distant Didymos system to help with planning both DART and Hera.