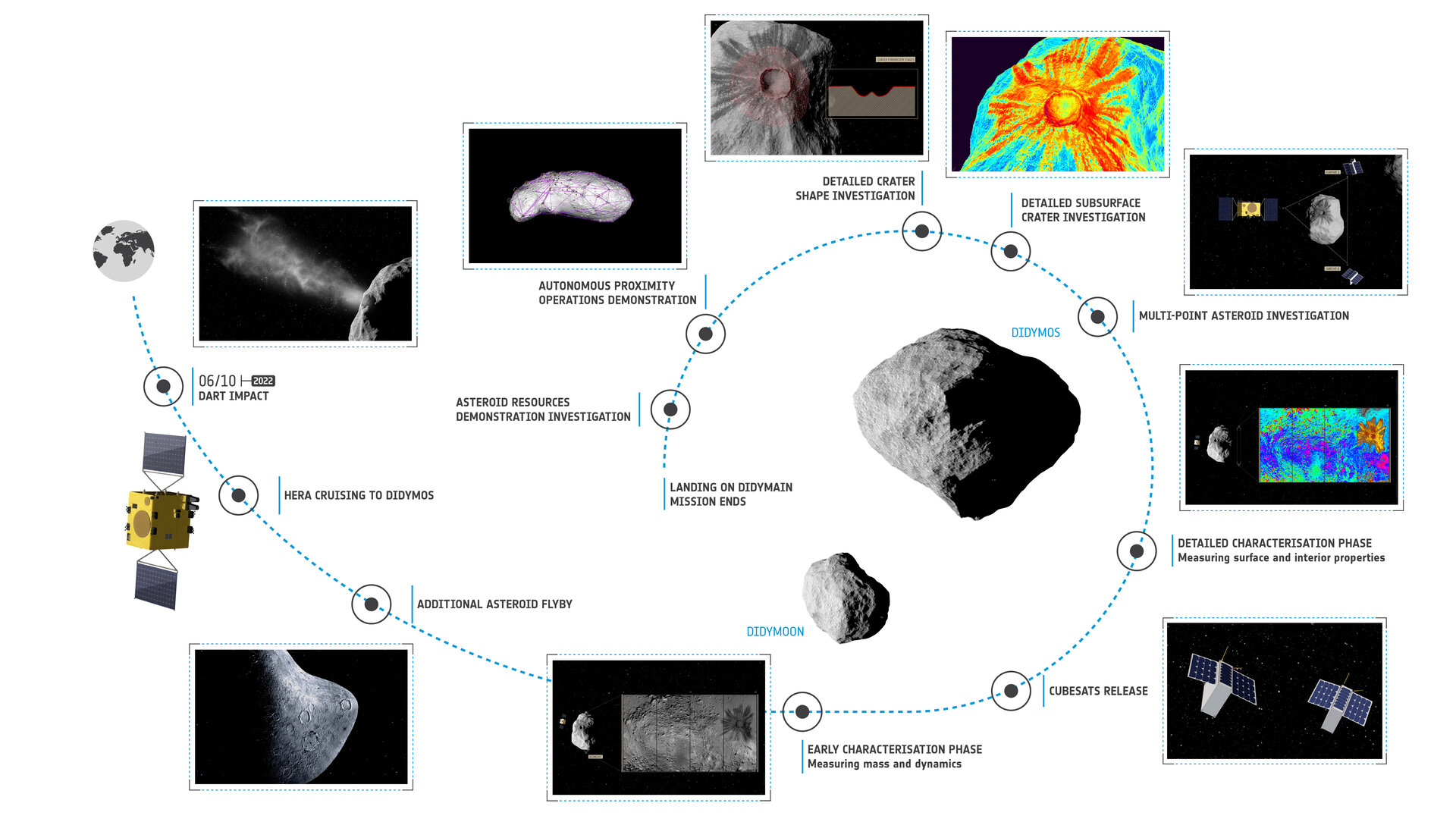 The Hera mission has evolved in various ways from its originally proposed predecessor, AIM. One of the most obvious is its timeline: instead of reaching the Didymos system in 2022, ahead of the US DART kinetic impactor, it will now arrive in late 2026.

When AIM was presented to the ESA Ministerial Council in 2016 the need for a 2020 launch and 2022 arrival was emphasised for two reasons. The first was to determine the dynamical state of the Didymos asteroids before kinetic impact, in order to determine the exact modification of Didymoon’s orbital and rotational parameters.

The second was that the simultaneous presence of DART and AIM at Didymos was needed to observe the kinetic impact ejecta, and gather information on the size and velocity of the material from DART’s crater – which would in turn help to understand how the asteroid’s material properties influenced the impact process.

The first point – understanding the dynamics of the Didymos system – has now been addressed by new Earth-based observations, gathered during its close approach in February-May 2017 and presented at the Didymos Observer Workshop in Prague during June 2018.

Previously there were two undistinguishable solutions for Didymos’s spin axis. This ambiguity has been resolved by these 2017 observations. And constraints on the strength of the binary ‘YORP effect’ – the subtle effect of thermal emissions altering a body’s spin state – are coming from additional observations in 2019 and 2021, expected to sharpen knowledge of the current orbital period of the Dimorphos moonlet around the main Didymos body.

Thanks to these efforts we should indeed know the pre-impact state of the Didymos system in sufficient detail to measure the effect of the DART impact.

The second point of the ejecta dynamics is covered by the LICIA (Light Italian CubeSat for Imaging of Asteroid) CubeSat due to fly with DART – provided by Italian space agency ASI – which was not planned when AIM was proposed. nicknamed ‘Selfie-Sat’, it will observe the impact ejecta in the important early phase of crater formation, in the first few minutes following DART’s impact.

The eventual amount of fallback ejecta onto both asteroids, important for the interpretation of the dynamic changes triggered by DART, can then be estimated from the velocity distributions measured by LICA and the subsequent Hera observations of unweathered fresh material across the surfaces of Didymos and Dimorphos.

Beyond these points, the primary measurements Hera will carry out are still essential to complete humankind’s first field test of planetary defence. Only with a dedicated observer mission can DART’s deflection of the orbit of a small asteroid be fully validated and potentially applied to other targets for planetary defence.

Hera will measure the mass of Dimorphos, so we know what was moved – it is essential to determine Didymon’s mass accurately so we can calculate the efficiency of the impact momentum transfer from the measured change of Dimorphos’s orbital period.

Hera will also gather the shape and volume of the moon, allowing modelling of its internal structure and response to the impact. Hera will also establish the new dynamical state of the Didymos system in exquisite detail, so the transference of kinetic energy into the system is fully understood.

And Hera will detail the geophysical effect of the DART kinetic impact, allowing us to extrapolate this one-off experiment to other asteroids.

Detailed modelling of asteroids and the space environment confirm that the crater made by the DART impact will remain unweathered during its first four years of existence, so Hera and its accompanying CubeSats will be studying it ‘fresh’, with access to pristine material beneath the surface.

Finally, DART and Hera together will provide inspiration to coming generations, that humankind together can indeed come together to protect itself from external threats.