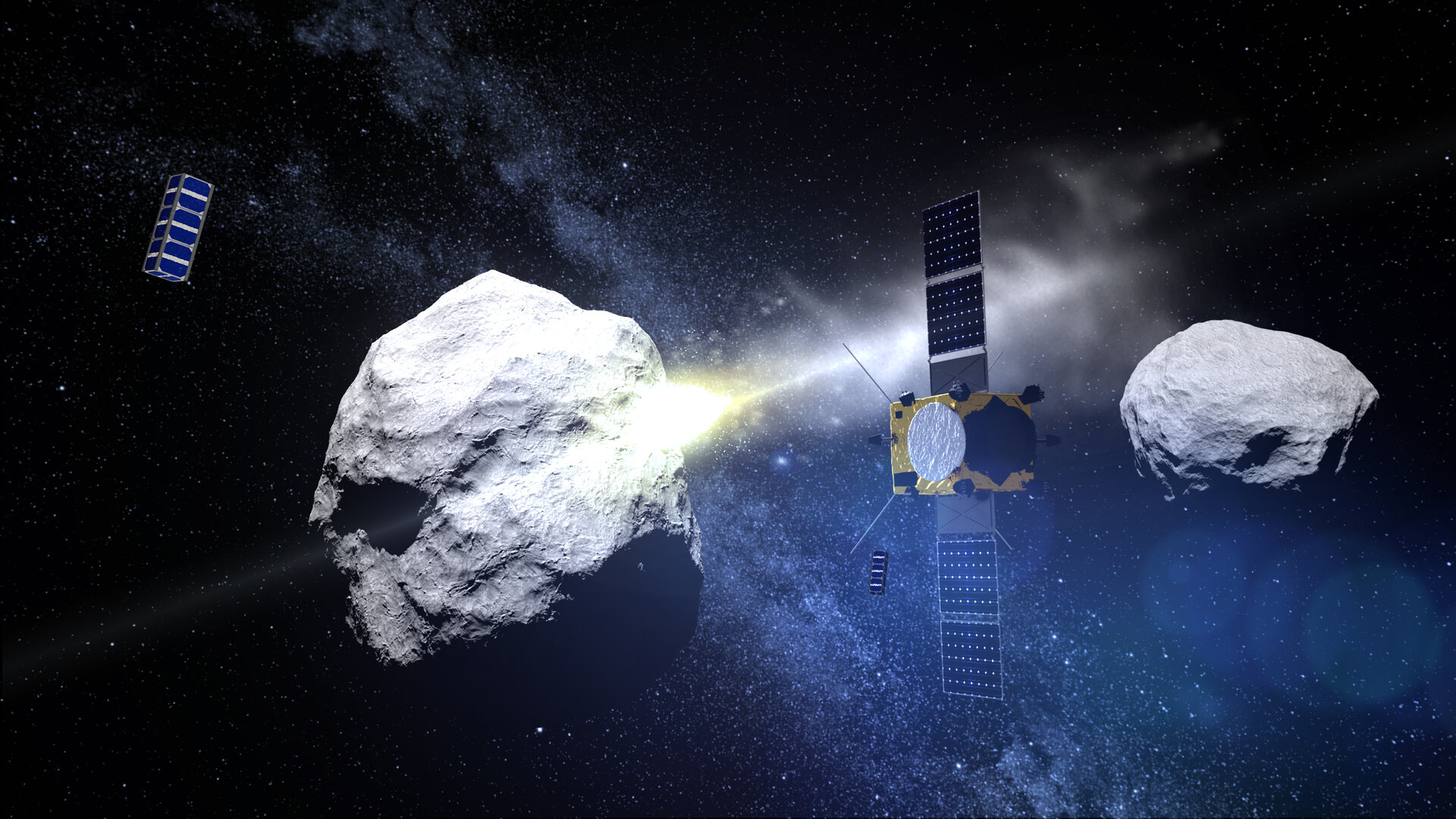 Europe’s proposed Asteroid Impact Mission is set to become humanity’s first mission to a double asteroid, and ESA’s first to a small body since Rosetta put down its lander on Comet 67P/Churyumov–Gerasimenko. Here are 10 key facts:

1. AIM has a trio of goals: to demonstrate key technologies for future deep-space missions, to investigate asteroid deflection techniques for planetary defence, and to revolutionise scientific understanding of asteroids.

2. AIM will have a ringside seat for the collision of a separate NASA spacecraft called DART with the asteroid’s tiny moon, gathering invaluable data that would help save Earth from impacts in the future should a real deflection mission be needed. These two ESA & NASA missions are collectively called the Asteroid Impact & Deflection Assessment (AIDA) mission.

3. AIM is a mission in a hurry. It must be built and ready to fly for a firm October/–November 2020 launch window in order to reach the Didymos binary asteroid system by June 2022, coinciding with Didymos’s exceptionally close approach to Earth.

4. AIM will perform detailed surface and internal structure investigations of the smaller 163- m- diameter ‘Didymoon’ in orbit around the 775- m diameter main asteroid both before and after the DART impact, to assess changes in its condition as well as its orbit. The closest precedent to this collision would be the 2005 impact strike of NASA’s Deep Impact probe with Comet Tempel 1, but that comet was a mountain-sized 6 km across, whereas Didymoon is only the size of the Great Pyramid of Giza.

5. AIM’s instruments currently under study include a high-resolution visible imager, infrared imager, and high- and low-frequency radars, the former to build up a 10- cm-resolution surface map, the latter to sound deep beneath the surface of the asteroid.

6. The mission is designed to carry a microlander called Mascot-2, based on its twin Mascot-1 currently flying on-board Japan’s Hayabusa-2. Powered by a solar array, Mascot-2 would image the surface in visible and infrared light, and beam radar signals through the asteroid for its AIM mothership to pick up on the other side. In case of a landing in a non-illuminated area, a ‘mobility mechanism’ would let the shoebox-sized microlander jump to another location.

7. AIM will also carry Europe’s first deep-space CubeSats. Several concepts being investigated would all contribute and complement AIM’s objectives with additional close-up measurements. Final selection will be made in January 2017.

8. Intended to be launched on Soyuz or the maiden flight of the Ariane 6 rocket, AIM will measure just 1.4 x 1.4 x 1.9 m (with solar arrays stowed). With a maximum mass of 835 kg at launch and about the size of a large office desk, AIM is much more compact than the lorry-sized Rosetta.

9. AIM will return science data to Earth from deep- space using an ambitious long-distance optical communications system, which would also double as an altimeter and ‘laser radar’ lidar mapper for scientific use, combined with a novel ‘holographic’ modulated metasurface antenna.

10. The mission, set to be presented for approval by European space ministers in December, will demonstrate various key technologies for follow-on deep space and resource utilisation missions, including inter-satellite links between AIM and its microlander and CubeSats, as well as advanced spacecraft navigation and guidance systems to allow semi-autonomous low-gravity landing and proximity operations around Didymoon.