The final approach to an asteroid has been practised for ESA’s proposed Asteroid Impact Mission using a real spacecraft camera mounted on a robot arm.

The 2020 AIM mission would find its way across deep space as usual with startrackers and radio ranging but the real challenge would come after arrival at its target Didymos double asteroids: picking its way around these unprecedented surroundings to close in on the smaller asteroid for detailed observations and setting down a lander.

The rehearsal took place at the Madrid headquarters of Spain’s GMV company, with ESA’s arm-mounted camera using dedicated navigation software to close in on a model asteroid.

“By including an actual navigation camera in the loop, we made the test as realistic as possible,” explains ESA guidance specialist Massimo Casasco.

As the Rosetta comet adventure showed last year, landing on a small body is no easy task.

“One of AIM’s objectives is to put down a lander on the smaller of the Didymos asteroids using onboard autonomy and very limited resources,” says Ian Carnelli, ESA’s AIM project manager.

The low-budget AIM will avoid costly dedicated proximity sensors, instead calling on smart visual navigation software to track its motion over the surface. 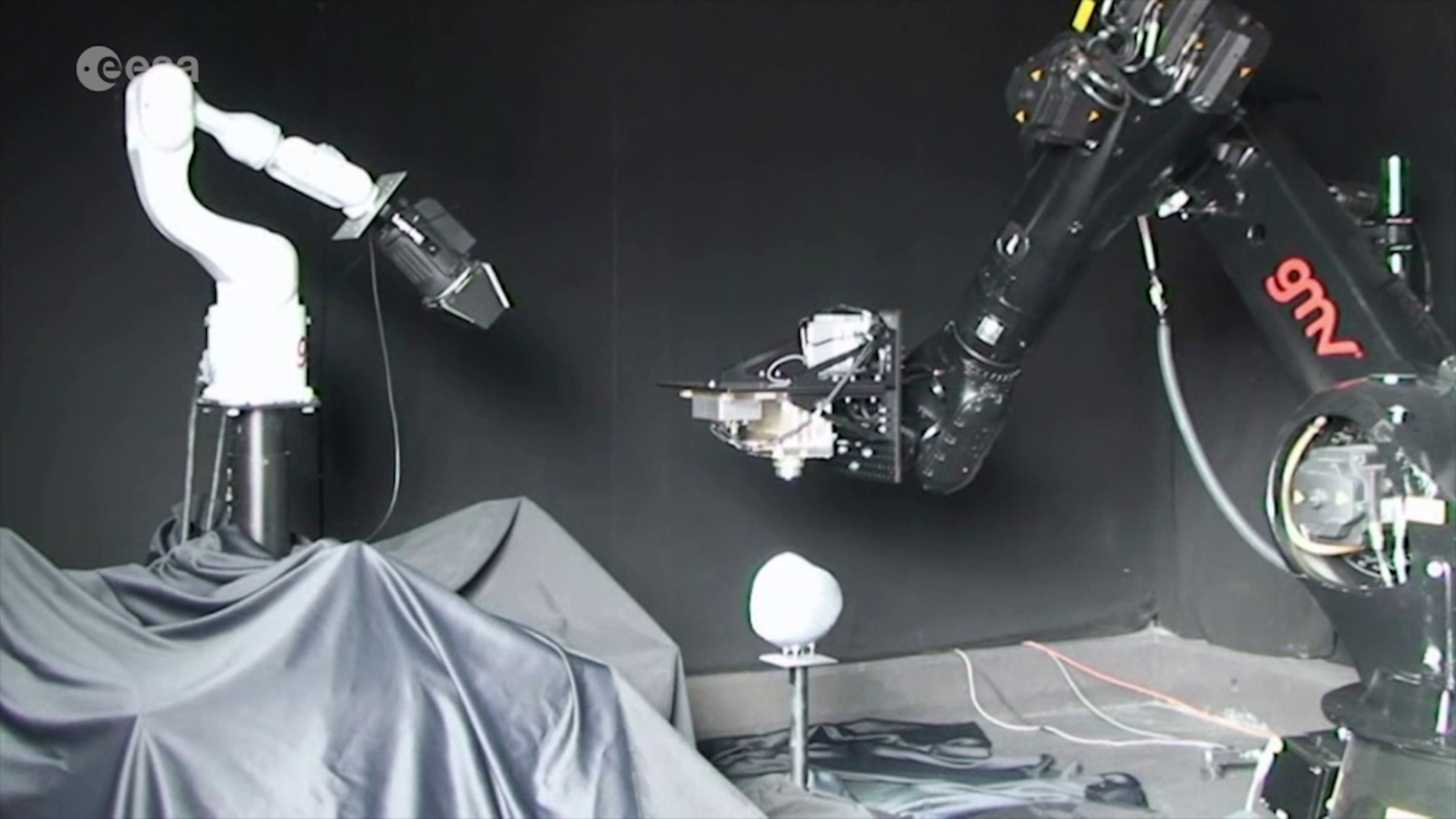 In addition, it might reuse its laser communication package for measuring height above the surface.

ESA’s camera took images for the processing software to first select landmark ‘feature points’ within the field of view and then to follow them from frame to frame.

The camera itself has a detector that acquires the images, a ‘frame store’ for their intermediate storage and an image-processing chip to perform the feature tracking, before providing the information to AIM’s guidance and navigation computer.

“The changing tracks of the various feature points over time (shown in purple in the video) are checked against the onward and rotational motion of the spacecraft to determine its position and orientation,” says ESA guidance expert Olivier Dubois-Matra.

“The ultimate goal for AIM is to demonstrate new ways to explore small Solar System bodies in the future,” adds Ian, “so we are testing this approach as fully as possible. In effect, the test bench is a fully fledged optical and robotic laboratory, testing AIM’s approach and the lander descent right down to deployment altitude.”

With a launch window opening in October 2020, AIM would be humanity’s first mission to a double asteroid. Its first major design review next month will allow detailed design to begin in February.

The Mascot-2 lander is being designed and tested by Germany’s DLR space agency and is based on the lander scheduled to reach asteroid Ryugu as part of Japan’s Hayabusa-2 in July 2018.