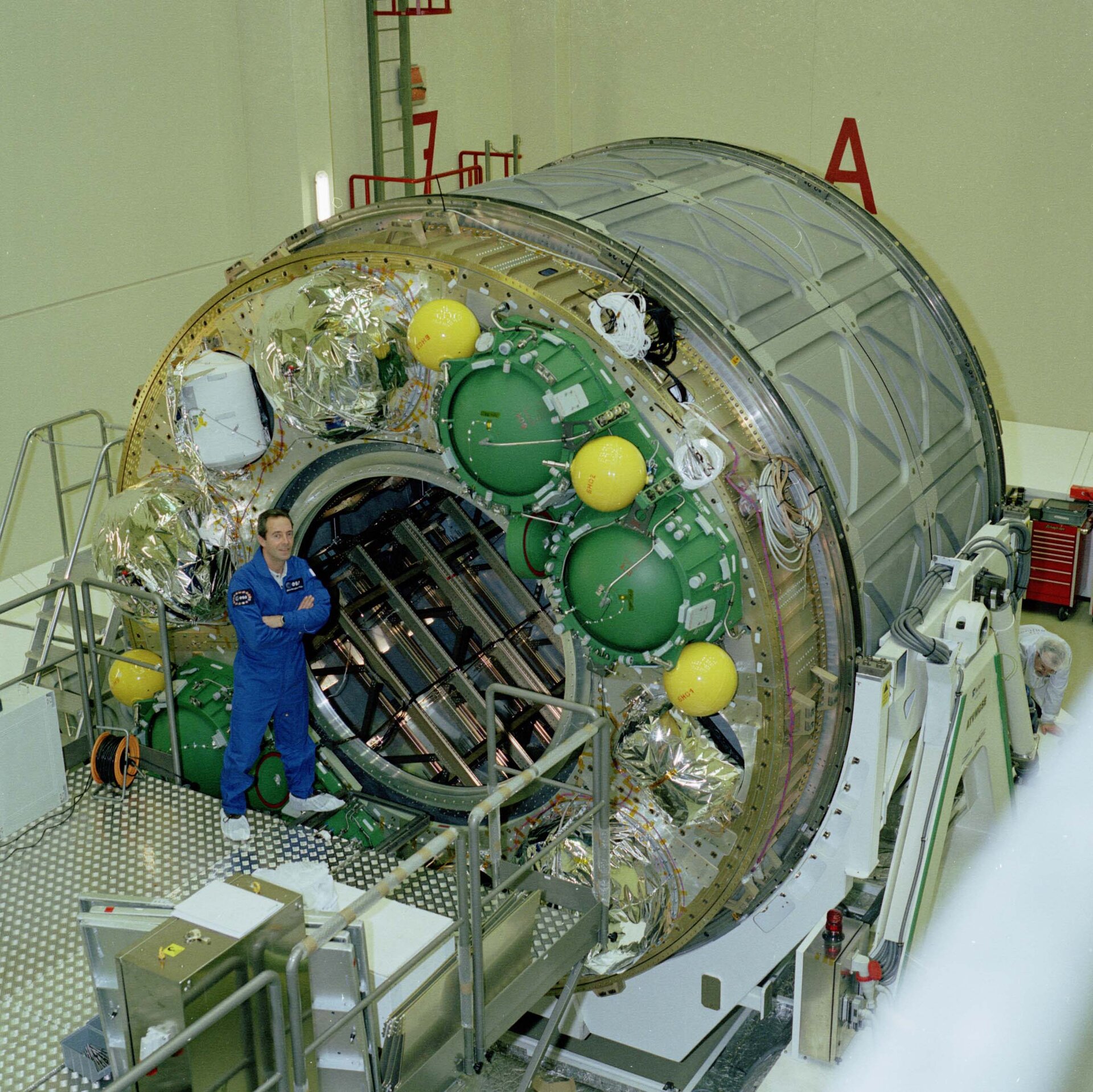 The Automated Transfer Vehicle (ATV), Europe's most crucial element of the International Space Station (ISS), is born. In December, soon after the impressive full-size mock-up of the 20-tonne spacecraft was assembled, it successfully started its 11-month test programme at ESA’s European Space and Technology Centre (ESTEC) in Noordwijk, The Netherlands.

The bus-size (10 m by 4.5 m diameter), cylindrical cargo-ship financed by ESA has been designed to periodically service and re-supply the ISS, starting in 2007.

About once a year a new ATV will fly unmanned and automatically dock with the ISS. The ATV can remain docked for up to six months before being loaded with waste and then disposed of in a destructive re-entry.

The first successful test was to simulate with acoustic vibrations the stress the ATV will encounter during the first three minutes of launch on top of the powerful European Ariane-5 launcher.

"Preliminary analysis has shown we had very good results after putting the whole structure through a level of frequencies up to 8 kHz with an acoustic level ranging from 141 dB to 147 dB" said Geoffrey Beckwith, ESA’s ATV Test Supervisor. This is equivalent to being directly in the exhaust jet behind several commercial airliner engines.

The four different test runs have been conducted in a special enclosed facility called LEAF (Large European Acoustic Facility) with 150 sensors put in different areas of the ATV to measure and check its hardware behaviour. Two dozen technicians and engineers from prime contractor EADS-LV, Astrium, Alenia Spazio, Fokker Space, ETS (European Test Services) and from ESA have coordinated the runs during 10-hour operations.

Detailed computer analysis of the test data acquired during the acoustic tests will continue in parallel to the post-test inspection and reconfiguration of the ATV for the next tests. Until next October, the ATV mock-up will undergo a series of mechanical and critical thermal tests, including solar array deployment.

Thanks to its own avionics and propulsion capability, in orbit the ATV will resemble the combination of a tugboat and a river barge carrying supplies to the ISS. At the ESTEC facility, during the testing, the ATV service module, which includes propulsion systems, electrical power, computers and most of the avionics, was filled with 1000 kg of propellant-like glycerin and water to recreate the most realistic flight conditions.

The ATV is designed to re-supply the ISS with up to 7500 kg for net cargo. Depending on the ISS’ own needs, the ATV is able to carry different combinations of supplies, carrying up to:

Most of this cargo will be stored in the second section - the Integrated Cargo Carrier - the pressurised upper segment that docks with the ISS. Once docked, two astronauts will be able to work in the Cargo Carrier, offloading supplies and conducting experiments. Air can also be released from the Cargo Carrier into the Station cabin. In assembling these two modules, ESA’s sub-contractors Astrium and Alenia Spazio have built the first ATV test model, also called the structural and thermal model (STM), which is not intended for launch.

Construction of ATV flight hardware has already started and the main integration of the first flight model will begin next summer with a scheduled launch to the ISS in September 2004. At present, about 1 000 people, in ten different European countries, are working on this ESA programme. "We have a heavy and tight schedule in front of us to be ready for flight in less than two years, but we feel confident that we can do it together with our industrial partners," said Patrice Amadieu, ESA’s ATV Deputy Project Manager.

As an unmanned space transport vehicle, the ATV, ESA's most challenging spacecraft project yet, requires a very high level of safety and reliability to automatically perform the critical operations of rendezvous and docking with a huge manned station. "The ATV will have to fulfil the demanding requirements of human spacecraft safety and at the same time have enough automatic capabilities to never involve the astronauts in manual rendezvous intervention to dock the ATV with the ISS," says ESA astronaut Jean-François Clervoy, who is supporting ATV development.

Built under management of EADS-LV (Les Mureaux, France), the vehicle will be launched on top of a dedicated version of the Ariane-5 launcher, currently under development. ATV is a non-reusable module and after docking with the ISS it will be loaded with 6500 kg of waste material generated onboard the Station and sent on a self-destructive return flight steep into the Earth's atmosphere where it will be burnt up.

This new European vehicle will dock with the Station's Russian Service module, Zvezda. The ATV has three times the payload capability of the current Russian Progress-M vehicle. Until now, only Progress-M is available to re-boost the station into a higher orbit around the Earth. This new logistics capability for Europe to carry out rendezvous, docking in space and re-boost the Station provides a way for ESA to contribute to the costs of ISS operations in orbit.