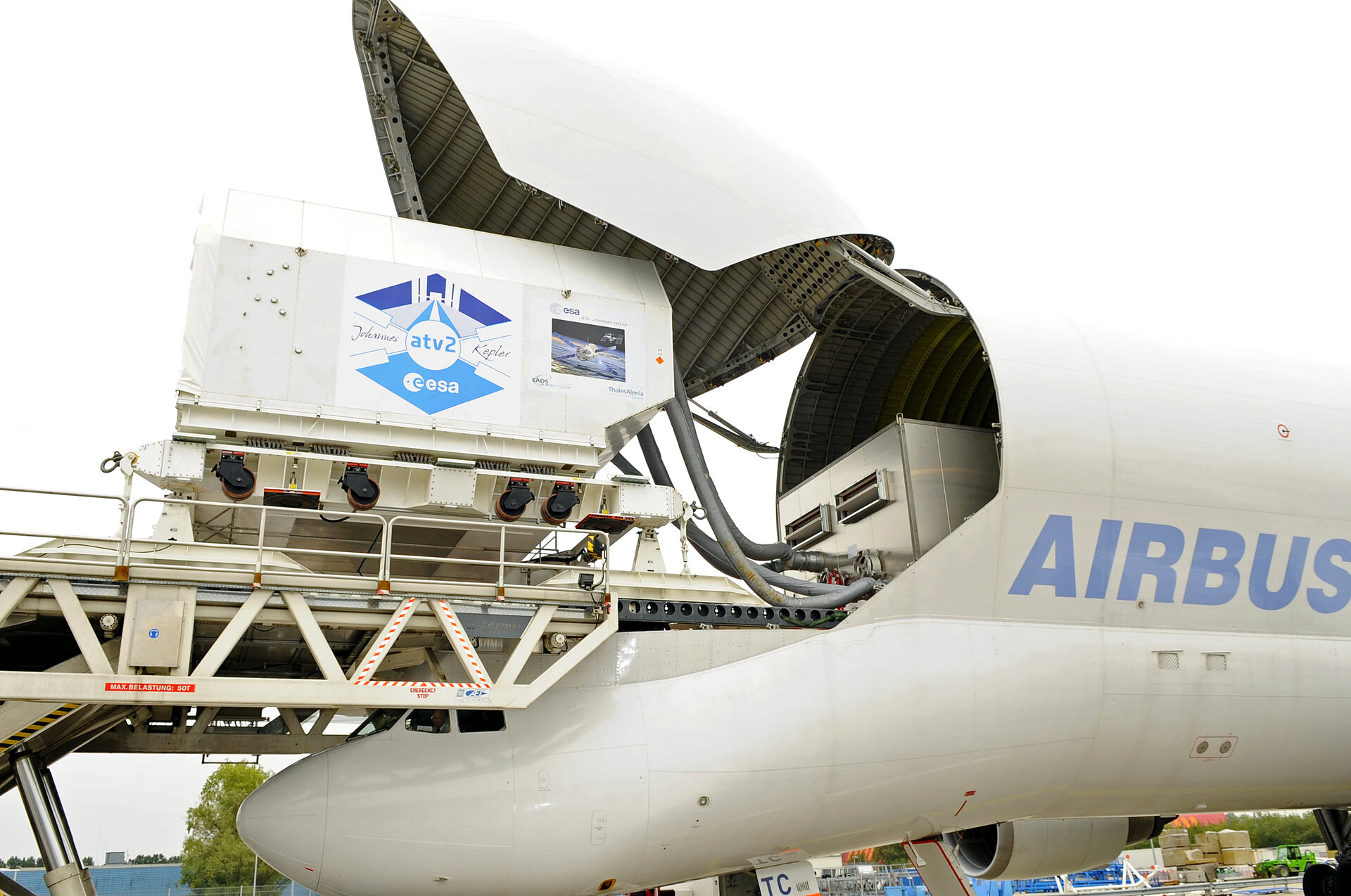 The Integrated Cargo Carrier for Europe's second Automated Transfer Vehicle, ATV Johannes Kepler, has been delivered to the premises of EADS Astrium in Bremen, Germany.

Scheduled for launch in November 2010, ATV Johannes Kepler is Europe's second Automated Transfer Vehicle (ATV), an unmanned cargo spacecraft for the International Space Station (ISS). ATV-2, named after the German astronomer and mathematician, is currently being assembled in Bremen by the European industrial consortium lead by EADS Astrium.

The Integrated Cargo Carrier (ICC), the section of the ATV that holds both the dry and fluid cargo, was built in Turin by Thales Alenia Space Italy.

The ICC was transported using a Beluga aircraft that left from Turin's Caselle airport on the morning of 9 September. After a short flight, the Beluga landed at Bremen airport. From there the ICC was transferred to the Integration Hall at EADS Astrium.

Later this year, the ICC will be functionally integrated with the other two main ATV modules, the Equipped Propulsion Bay (EPB) and the Equipped Avionics Bay (EAB), for final subsystem testing.

The avionics bay for ATV-2 is currently undergoing thermal vacuum testing in the Large Space Simulator at ESA's test centre in Noordwijk, the Netherlands.

“The challenge of ATV Johannes Kepler is to make it even better than the very successful ATV Jules Verne,” said Nico Dettmann, ESA’s ATV Programme Manager. “We are about to implement a number of design changes and lessons learned derived from the Jules Verne post-flight analysis, but we also have to close some non-generic qualification issues. Space project history teaches us that often it is not the first but a subsequent recurring spacecraft that shows major flaws, and this is why we have to be even more thorough for Johannes Kepler than we were for Jules Verne.”

“The successful premier of the first ATV Jules Verne has impressively demonstrated the strength of Europe's human spaceflight programme and the industry supporting it,” said Simonetta Di Pippo, ESA’s Director of Human Spaceflight. “ATV Johannes Kepler will follow in Jules Verne's footsteps. It will be an essential European contribution to the logistics of the ISS programme. Based on the success of the ATV programme, we are currently working on the next important step of human spaceflight in Europe – the development of a European cargo transportation system called the Advanced Reentry Vehicle (ARV), which will reinforce Europe's positioning among the international partners in human spaceflight and exploration.”

ATV Jules Verne delivered 4.5 tonnes of cargo to the ISS, including food, clothing, propellants, water and oxygen. It also contributed to ISS operations by performing regular reboosts and a debris avoidance manoeuvre of the orbital complex and by removing 2.5 tonnes of waste at the end of its six-month mission.