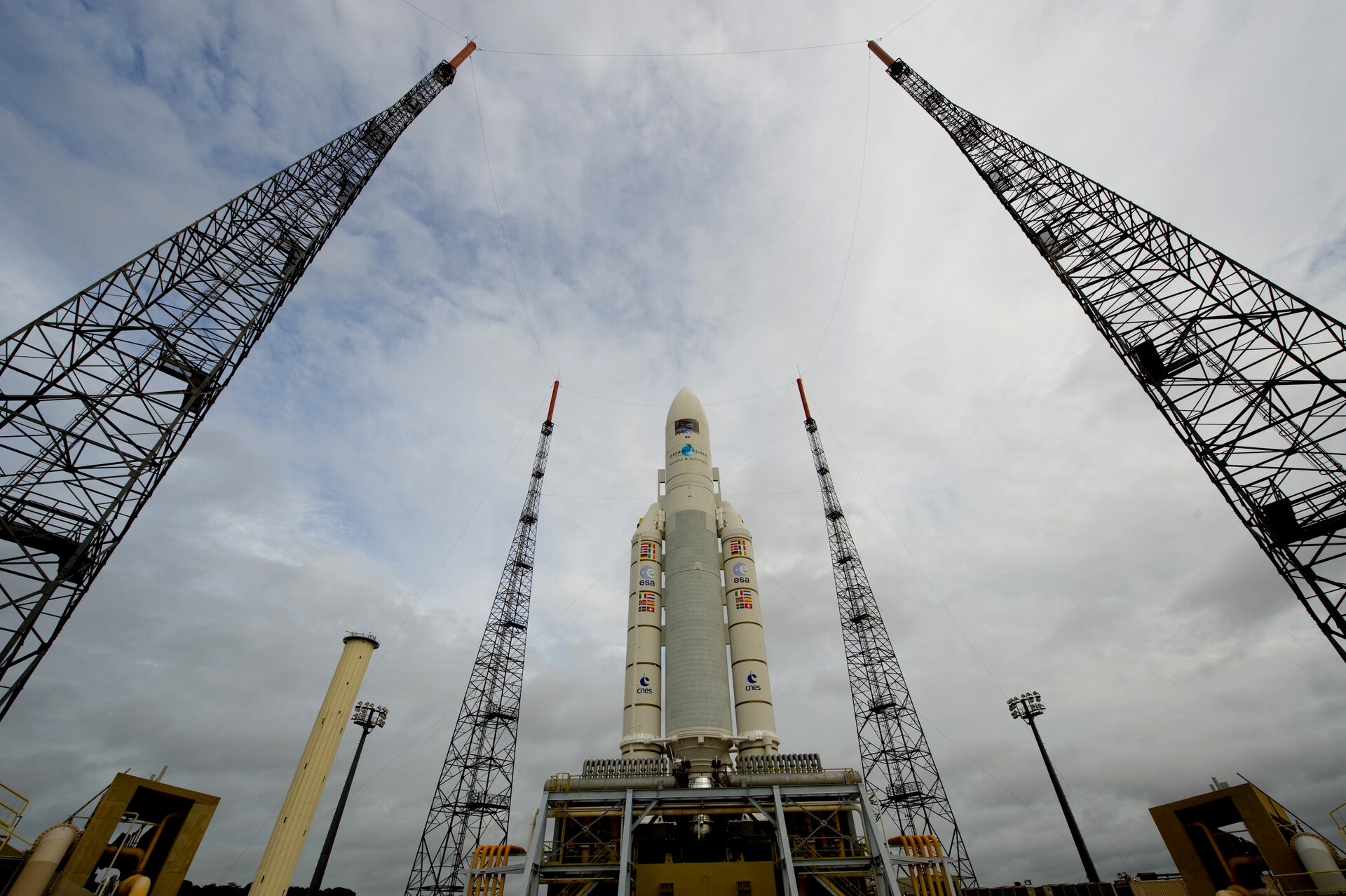 Yesterday’s roll-out of Ariane 5 ES and Jules Verne ATV started over 3 hours late after an anomaly with the mobile air conditioning unit. Once underway, transportation of the 760-tonne launcher and Jules Verne from the Final Assembly Building at Europe’s Spaceport to the launch complex 3 (ELA 3) proceeded without a hitch.

Around 300 people watched from a safe distance as the huge 2000-tonne platform carried the 57 metre-high Ariane 5 launcher to the launch pad at Europe’s Spaceport in Kourou, French Guiana. “It was a moving moment. And now to see the Ariane 5 ES and Jules Verne on the pad represents a special step for me after eight years of effort,” said Jean-Michel Desobeau, Arianespace's ATV Programme Director.

The roll-out was able to proceed thanks to good weather in the Kourou area – no thunderstorms, lightning or strong winds. A powerful diesel truck pulled the massive platform along a 2 km-long road, reaching speeds of just 5 km/h. Behind the convoy, an optical cable constantly connected the platform to the Final Assembly Building and the Launcher Control Centre. From there, Arianespace specialists monitored the health of the launcher.

The air conditioned airflow was also constantly checked – keeping the hardware cooled and avoiding humidity getting inside the launcher. After 2 hours, the Ariane 5 arrived at the pad. Overnight about 50 Arianespace engineers and technicians worked until 04:00 Kourou time (07:00 CET, Saturday) at the pad to reconnect all wiring on the launcher and the ATV.

Meanwhile, Astrium and ESA engineers checked all connections with Jules Verne ATV which is encapsulated under the Ariane 5 fairing at the launch pad. They also ran a radio frequency test of Proximity Link with the folded antenna mast of the ATV. This ‘ProxLink’ allows the ATV to communicate automatically with the ISS during the crucial rendezvous manoeuvres scheduled between 29 March and 3 April.

On Saturday, filling of the main stage with cryogenic propellants starts at 22:00 Kourou time, and will take three hours, almost up to launch time. The 10-hour launch countdown starts at 15:00 Kourou time (19:00 CET).