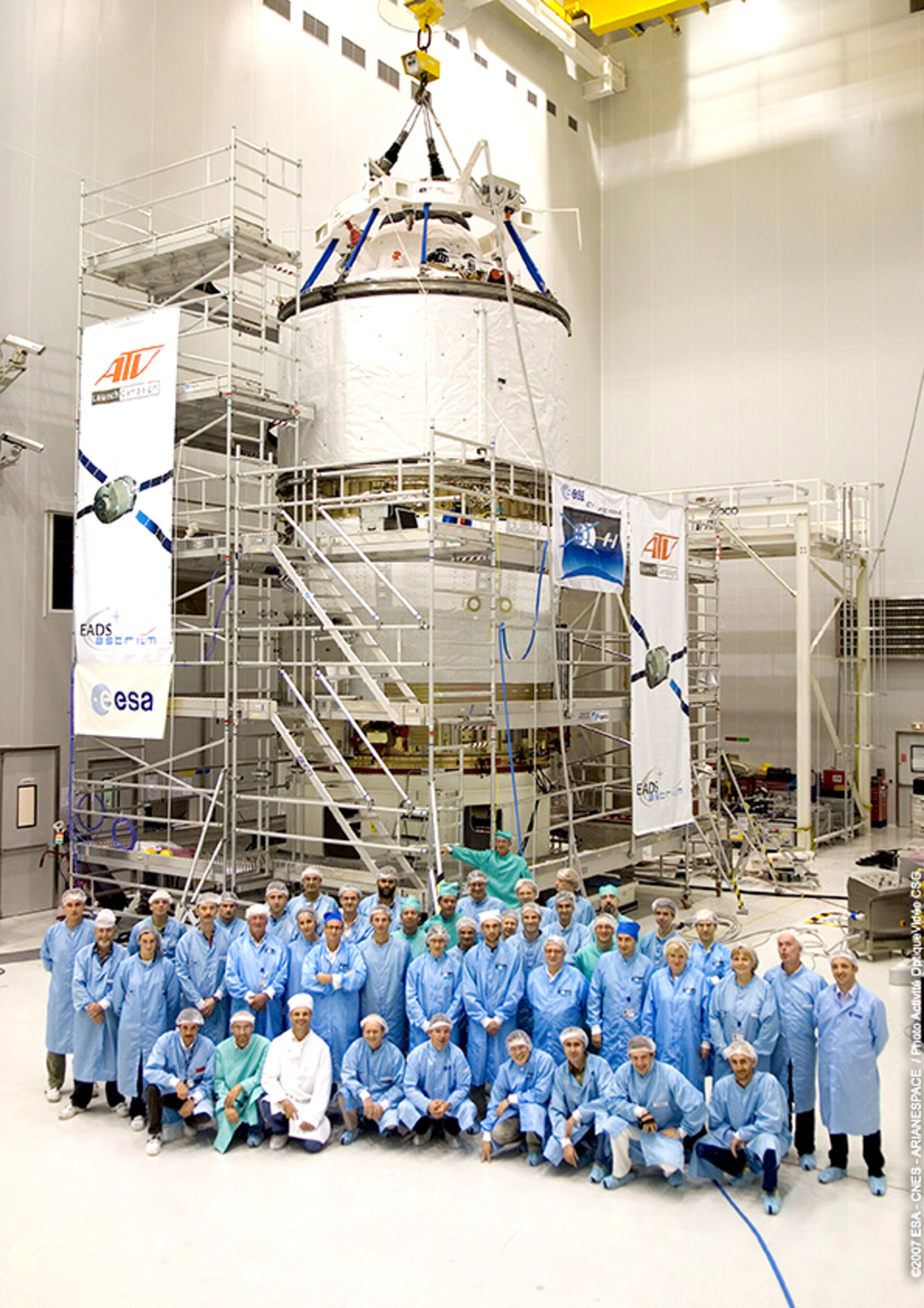 Three weeks into delicate fuelling operations, Jules Verne Automated Transfer Vehicle has also been successfully loaded with oxygen. In orbit this will be transferred to the International Space Station's atmosphere for the crew to breathe.

The maiden voyage of the first European International Space Station (ISS) resupply spaceship is targeted for no earlier than 22 February.

Since early January, the launch campaign of the Jules Verne Automated Transfer Vehicle (ATV) has intensified with the month-long loading operations. These operations take place in the huge fuelling chamber inside the vast S5 integration building at Europe's Spaceport in Kourou, French Guiana.

“The engineers first created a vacuum in the ATV gas tank and its circuit. Then, after checking the system is leak-proof, they connected the oxygen tank to transfer the gas,” said Dominique Siruguet, ESA ATV Campaign Manager. “But before this, they had to implement many strict safety procedures and create a very clean environment. This is all time consuming but necessary to avoid any risk with the highly explosive and flammable oxygen.”

Many of the safety measures are needed to prevent any hydrocarbon particles from entering the on board and ground equipment, where they would present a fire risk. For this operation, a team of certified experts, different from the ‘scapemen’ who perform the propellant fuelling, wear white non-flammable suits to handle the oxygen.

From now until the end of the month, the largest quantity of propellant will be loaded on board Jules Verne: around 2 200 kg of MMH (Monomethylhydrazine) and 3 600 kg MON3 (Mixed Oxides of Nitrogen) propellant which will be used by ATV’s own propulsion system.

ATV will use these propellants for its autonomous navigation towards the International Space Station (ISS) and, once docked, to contribute to the Station's attitude and orbit control, including re-boost of the whole space complex. Already around 860 kg of nitrogen tetroxide oxidiser (N2O4) and Russian produced UDMH (Unsymmetrical dimehtylhydrazine) have been stored on board ATV.

With the amount of propellant in ATV about to exceed 4 tonnes, the safety rules at the Spaceport prohibit working on other satellites or spacecraft within the perimeter of the S5 integration building.

"In the first week of February, Jules Verne ATV – filled with a total 6.5 tonnes of four different propellants and 20 kg of oxygen – will be moved to the Final Assembly Building [BAF - Batiment d’Assemblage Final] where it will be mated to the Ariane 5 launcher. We then enter the Ariane 5/ATV 'combined operations plan', which ends with the final countdown," explains Nicolas Chamussy, ATV Programme Manager for EADS Astrium.

The whole Jules Verne ATV weighs 19.4 tonnes, including approximately 1 338 kg of ‘dry cargo’. During fuelling and oxygen operations, the ATV is electrically completely shut down for safety reasons. Each day the whole spacecraft is activated to check the spacecraft’s ‘health’, and charge the batteries once again.

Once in orbit, the 20 kg of oxygen carried up by Jules Verne ATV, is manually injected by the crew into the ISS atmosphere. The ATV remains attached for up to six months, mostly in dormant mode with the hatch to the ISS open.

With the ATV docked, the Station crew can enter the cargo section and remove the payload: supplies, science hardware, and lightweight luggage bags. Meanwhile, the ATV's liquid tanks are connected to the Station's own plumbing and their propellant contents discharged.

According to the needs of the ISS and its partners, the ATV remains an integral Station element for up to six months, and delivers dry cargo, fuel, water and oxygen to the ISS.