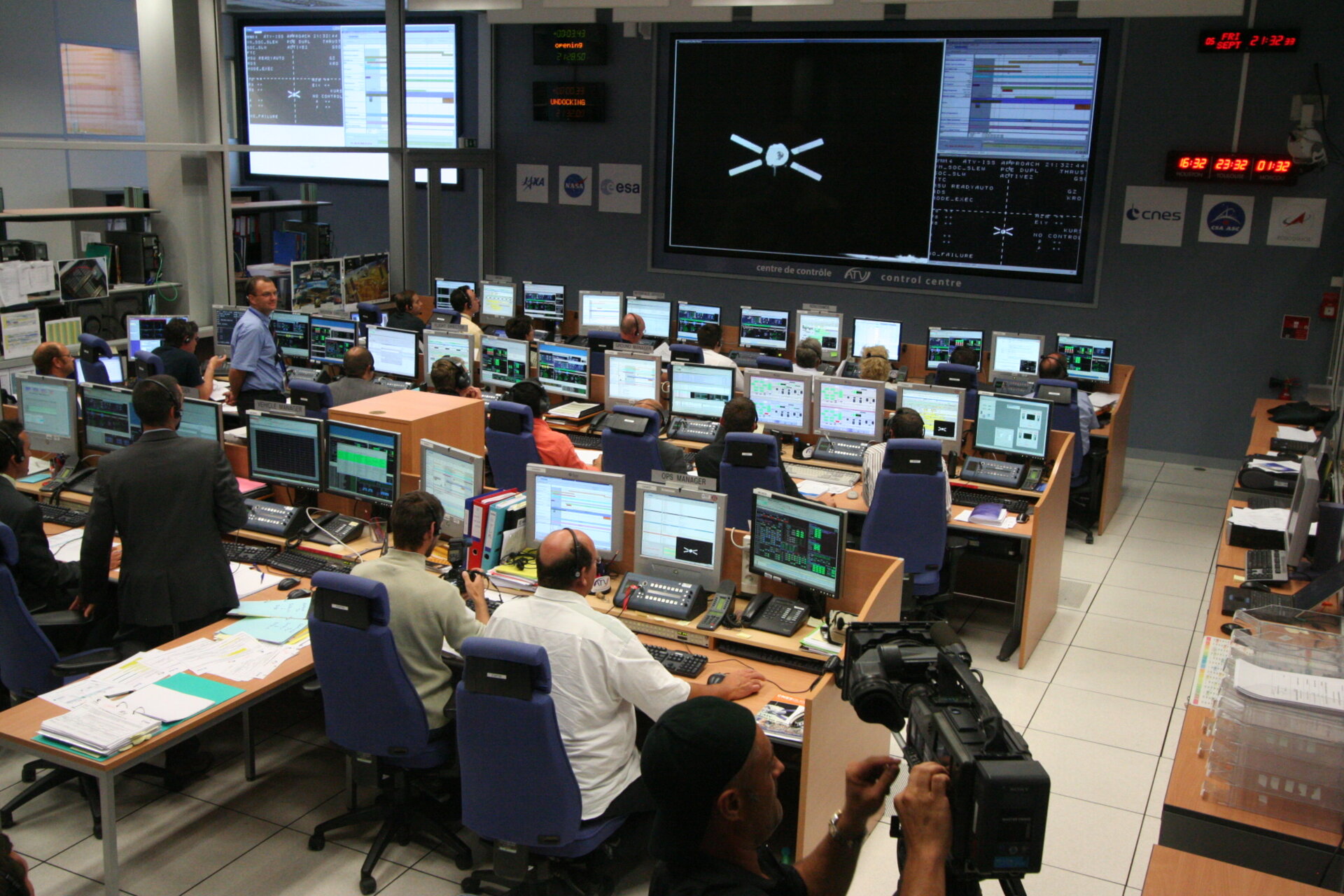 ESA PR 36-2008. At the end of a flawless six-month mission, Jules Verne, Europe’s first Automated Transfer Vehicle, undocked from the International Space Station today at 23:29 hours CEST. The ATV has now embarked on the last leg of its journey in space, which will end with a controlled destructive re-entry into the Earth’s atmosphere on 29 September.

The hatches between the ISS and the ATV were closed by the Station crew on 4 September following ATV preparation for automated undocking. Once all other pre-undocking tasks had been performed, the ATV hooks were opened, detaching Europe’s unmanned logistics vehicle from the Station, with a spring mechanism pushing it slowly away. After drifting unpowered for one minute to a distance three metres away from the Station, the ATV deployed its smaller attitude control thrusters to start its departure boost and distance itself further. Within 22 minutes of undocking, the ATV was right below the ISS at a distance of about 5 km, at which point its automatic emergency systems (which can initiate a Station collision avoidance manoeuvre in the unlikely event of this being necessary) were disabled.

Having completed this 22 minute undocking and departure-boost operation, the ATV is now in its rephasing period, which will last just over 23 days. This covers carrying out manoeuvres to lower the ATV orbit, bringing it back on the same orbital flight path as the ISS but at a certain point below and behind. This time period for carrying out these manoeuvres is necessary in order to optimise fuel consumption, so that the ATV arrives at the correct point enabling its re-entry over a completely uninhabited area of the South Pacific to be viewable from the ISS, as well as from two specially-equipped observation aircraft to be deployed at monitoring locations in the region.

The ATV has had an exceptionally successful inaugural mission following its launch on 9 March: a perfectly executed in-orbit test phase prior to docking; delivery of the necessary logistics supplies to the Space Station; carrying out four ISS altitude-raising reboosts to counter residual atmospheric drag; additionally performing an ISS debris avoidance manoeuvre on 27 August after fragments of an old satellite came within the Station’s vicinity; and currently loading up with a cargo of dispensable Station items and waste. The ATV has truly demonstrated all its key capabilities, and more.

“How the ATV has performed highlights extremely well how the benchmark of European space technology has been raised, and the wealth of expertise present in European industry“, said Simonetta Di Pippo, ESA’s Director of Human Spaceflight. “This bodes well, not only for future ATV missions to the International Space Station, but also for developments of this kind of technology that may eventually provide Europe with an autonomous cargo return capability and independent access to space for European astronauts.”

At the ATV Control Centre located at the French Space Agency CNES in Toulouse, it has been a busy past few days for the joint ESA/CNES team, testing communication links with the spaceship, updating ATV system parameters and defining the orbital profile the ATV will take on its journey back into the Earth’s atmosphere. Prior to the undocking, the ATV-CC also had the responsibility of activating all the relevant ATV primary and backup systems and giving the undocking command.

“Even though our schedule has been very busy at the ATV Control Centre, I couldn’t have wished for a better mission“, said Hervé Côme, ESA’s ATV Jules Verne Lead Mission Director. “All the systems have performed exceptionally well throughout the whole mission and continue to do so, which has allowed us to extend operations by a month. I should like to express my gratitude to all the ATV-CC staff and to everyone else involved in making this mission a success. And in just over three weeks, we will be looking forward to the ATV 2 mission in 2010”.

Prior to the undocking, the ISS crew spent the last few days making the final preparations, including transferring from the ATV equipment needed on the Station, loading up the ATV with Station waste and also setting up and testing equipment for ISS/ATV communications for this operation. They will now be preparing for the forthcoming arrival at the ISS of the next logistics vehicle, Russia’s Progress 30P spacecraft, on 12 September.