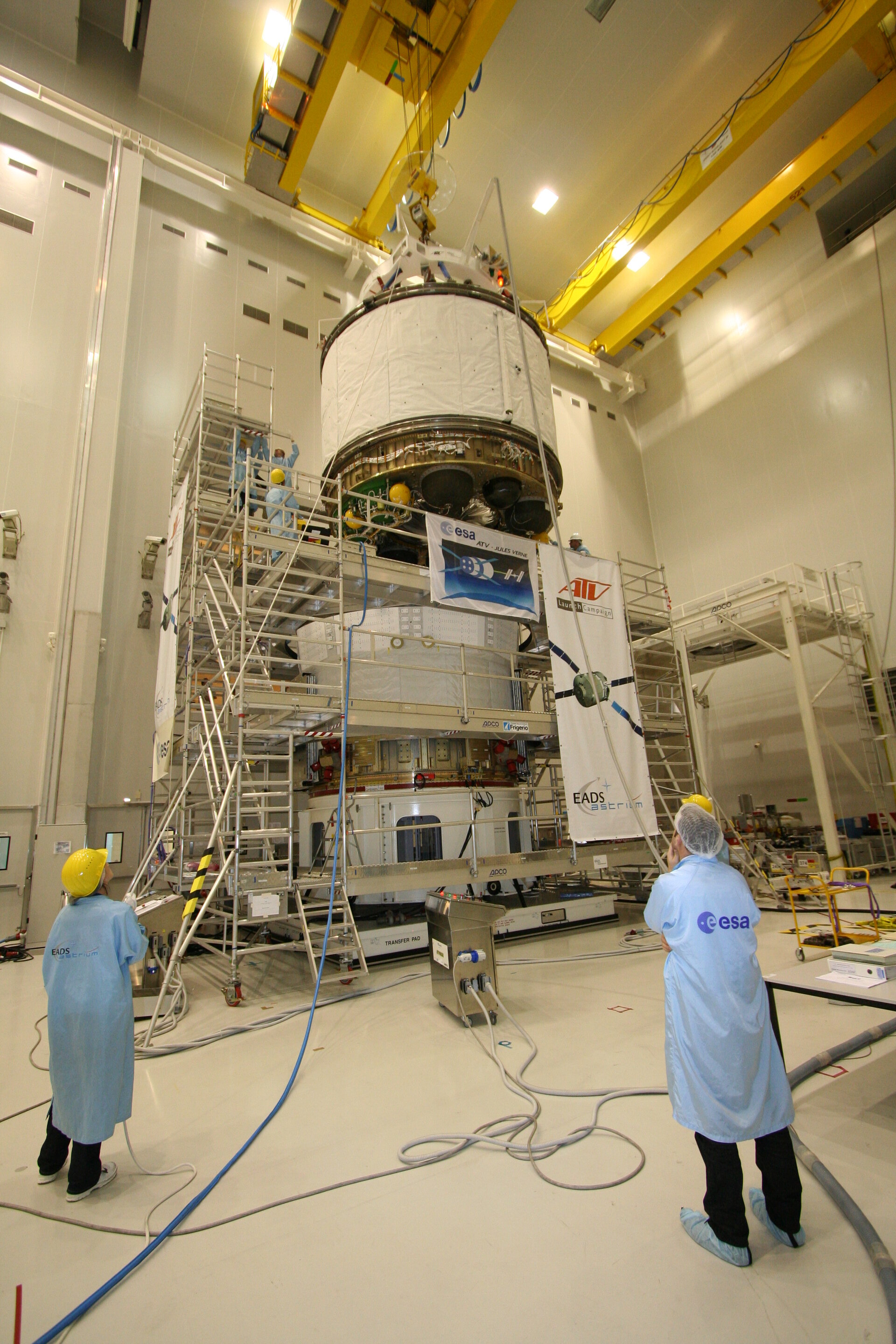 For the first time in 40 years of space activities, a silent revolution is taking place at the European launch site in Kourou. Jules Verne, the first human-rated spacecraft to be launched from Europe's Spaceport, is being prepared for launch.

The 48 m3 pressurised module of the largest, most complex automated spacecraft ever developed in Europe has been inspected and closed, fulfilling the most stringent rules of human spaceflight.

Three days later, the two halves of the 20-tonne Automated Transfer Vehicle (ATV) – the avionics/propulsion module and the pressurised cargo carrier – were mated ready for its launch, scheduled for February 2008, to re-supply the International Space Station (ISS).

“In order to eliminate any risk of disease or contamination for the astronauts on board the ISS, we have disinfected all the surfaces inside the pressurised module with purified hydrogen peroxide [at 6%]. Even if it is launched unmanned, ‘Jules Verne’ respects all the human spacecraft safety requirements. This also applies to the 7 tonnes of cargo carried into orbit”, said Patrice Amadieu, ESA’s ATV Deputy Project Manager.

Over five days, the interior of the cabin has been first disinfected, filled with approximately 1300 kg of ‘dry cargo’ such as food (500 kg), clothing (80 kg) and spare parts, and then disinfected a second time. Afterwards, experts from ESA, NASA and the world-famous Institut Pasteur’s laboratory, through its branch in French Guiana, have taken surface samples inside the ATV cabin for bacteriological analysis.

“Before closing the aft rear door of the pressurised module [through which the cargo has been loaded], we inspected one last time the entire cabin to be sure that everything was secured for the launch and safely placed where the ISS crew will expect the different items to be. After working for seven years on the programme, it was a special feeling to be the last person inside Jules Verne before it is launched into orbit”, said Charlotte Beskow, ESA engineer in charge of on-orbit crew operations.

Last week, with the technical support of Thales Alenia Space in Turin and flown in from Italy, the ATV’s tanks were filled with about 268 litres of drinking water for the ISS astronauts. This is the municipal water of Turin (Italy) that has been treated according to Russian standards. Once in orbit, the water will be transferred via hoses to small portable containers or to the main tank on the Russian Service Module, where ‘Jules Verne’ will be docked for up to four months.

“It took about five hours to tank the water on board. The fact that for the first time drinking water will be carried into orbit by a European cargo spaceship for the ISS crew brings a great sense of satisfaction”, said Pierre Rebeyre, ESA expert for water quality control and Life Support System Development.

The ATV can deliver to the ISS water either in compliance with the standards of NASA or with those of the Russian State Space Agency Roscosmos, but the ISS partners have decided Jules Verne will only bring the Russian water type.

Roscosmos standards call for water with certain amounts of minerals, such as calcium, magnesium and fluoride, and disinfection with silver obtained via electrolysis. By contrast, the NASA potable standard requires water with a low dry residue, such as the one produced through reverse electrolysis process by fuel cells on board the NASA Space Shuttle, and disinfection with iodine.

Synthetic air inside the cabin

Once the ATV's pressurised module is closed and sealed, its air can be purged and replaced by pure synthesised air. The main purpose of this operation is to ensure that the astronauts breathe clean air, free from particles, bacteria or microbes and unaffected by off-gassing from the several tonnes of cargo.

Off-gassing poses a serious concern in space because cargo objects emit odours and odourless gases that can endanger the cabin environment. Because no windows can be opened in space, the climate of the ISS and space vehicles are delicately checked and balanced. The air inside the pressurised module will be regularly analysed until launch by ESA, NASA and Institut Pasteur experts to be sure that cargo off-gassing will not alter the quality of the air brought into orbit and then mixed with the Space Station atmosphere.

Implementing a work schedule of two eight-hour shifts and sometimes three shifts for six days a week, the ATV campaign, which started in early August, solved all technical issues. The two major pieces of the ATV, a pressurised payload unit and an avionics/propulsion unit, were carefully ‘mated’ for the last time in one piece on 15 December in the Spaceport's giant integration hall. In this final launch configuration, the ATV is the size of a double-decker London bus.

As the year 2008 approaches, Jules Verne ATV will be transferred to the filling area in the restricted propellant zone of building S5-B. In the first days of February, the cargo vessel will be transferred to a different site for integration atop a special Ariane 5 launcher. The launch and maiden voyage to the International Space Station is scheduled on the first Ariane 5 flight of the new year in February 2008.