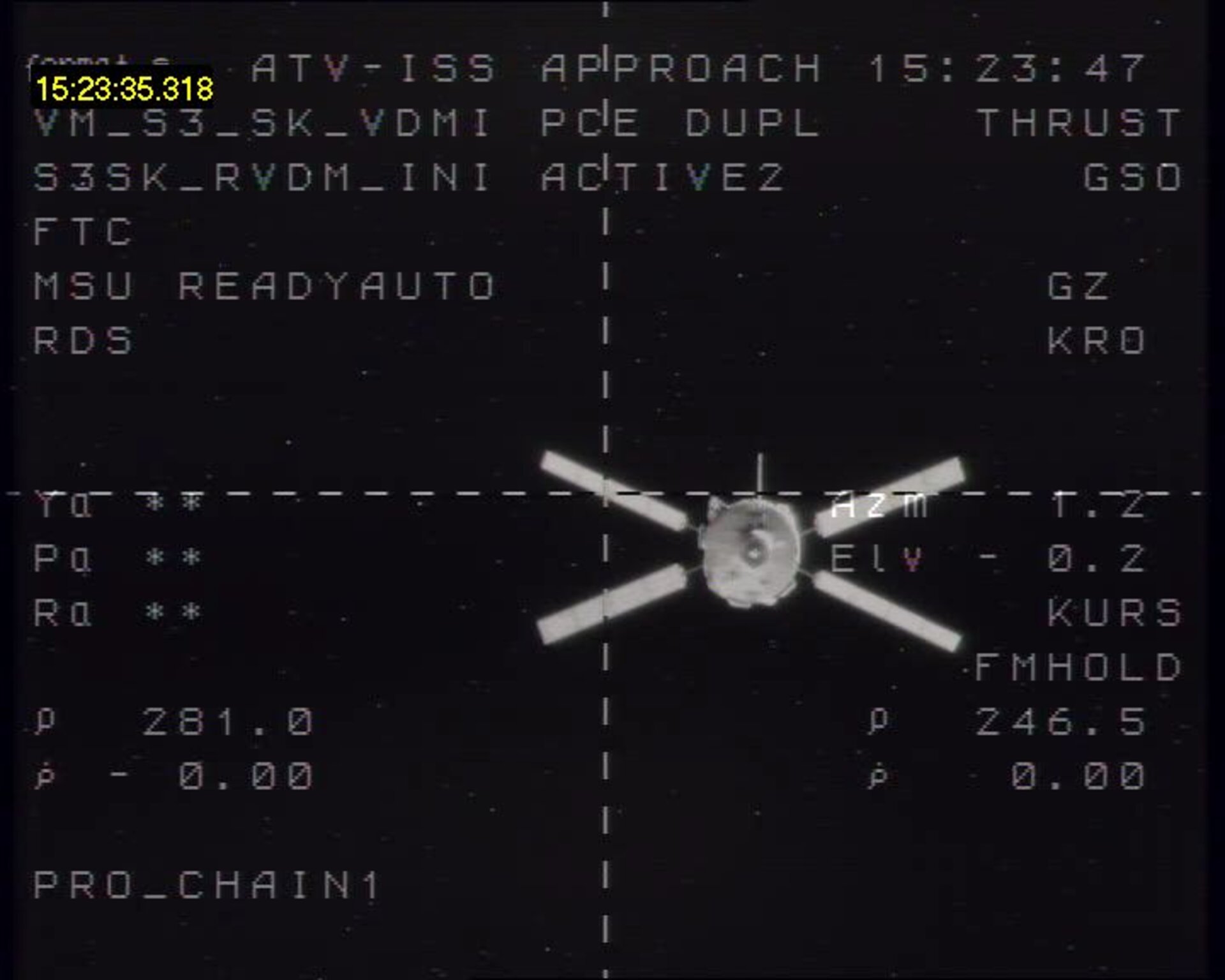 Jules Verne ATV today approached the International Space Station to within 11 m of the docking port on the Russian Zvezda module. The approach was part of a second ATV demonstration day which clears the way for the first rendezvous and docking attempt on 3 April.

“I’m known for my understatements, but the only word that comes to mind about today is impressive,” said John Ellwood, ESA’s ATV Project Manager. “It was impressive to see how Jules Verne, the staff at the ATV Control Centre, the control centres in Moscow and Houston pulled together today. It was a perfect dress-rehearsal for Thursday.”

Today’s manoeuvres included the first demonstration of the critical optical navigation system, using the European-developed Videometer technology. It was confirmed that ATV can use this system to autonomously navigate to within 11 m of the ISS.

“This demonstration day confirmes the performance of the vehicle is even better than we had hoped for,” said Nicolas Chamussy, Astrium ATV Project Manager. “This is a world premier for automated rendezvous using optical sensors, following the world’s first demonstration of relative GPS navigation between Jules Verne and the Station performed on Saturday.”

“Today was an important success for the Toulouse control centre to orchestrate a human-rated mission with the Station and it is a main step which is very promising for the docking attempt on Thursday,” added Lionel Baize, ATV-CC Project Manager for the French space agency, CNES. “It is an incredible challenge to have three control centres working together and to interact live with the ISS crew.”

Mission controllers at the ATV Control Centre (ATV-CC) in Toulouse, France, also confirmed they could issue very specific commands to Jules Verne, including Hold Retreat and Resume. These commands may have to be issued if any unforeseen problems occur in the ATV’s automatic guidance system.

Today’s demonstration also included the first active participation of the ISS crew in the mission. Once ATV had reached the 11-metre stand-off point, the astronauts were instructed to issue a Retreat command bringing Jules Verne back to the 19-metre point. The crew then issued an Escape command, which automatically took Jules Verne to a safe location away from the ISS.

The close approach to the ISS presented the ATV team with an opportunity to inspect some thermal blankets on the exterior of the spacecraft that had become degraded. “These were in exactly the positions that our thermal analysis had predicted. At the moment we do not envisage that this will have any impact on Thursday’s planned first docking attempt,” said John Ellwood, ESA’s ATV Project Manager. “We have addressed with our ISS partners the increase in power we might need to maintain the temperatures and we foresee no problems.”

Data collected during Demonstration Day 2 will be made available to ISS managers for their go-ahead to proceed with a first docking attempt on Thursday. Jules Verne ATV is scheduled to dock with ISS at 16:41 CEST (14:41 UT) on 3 April.