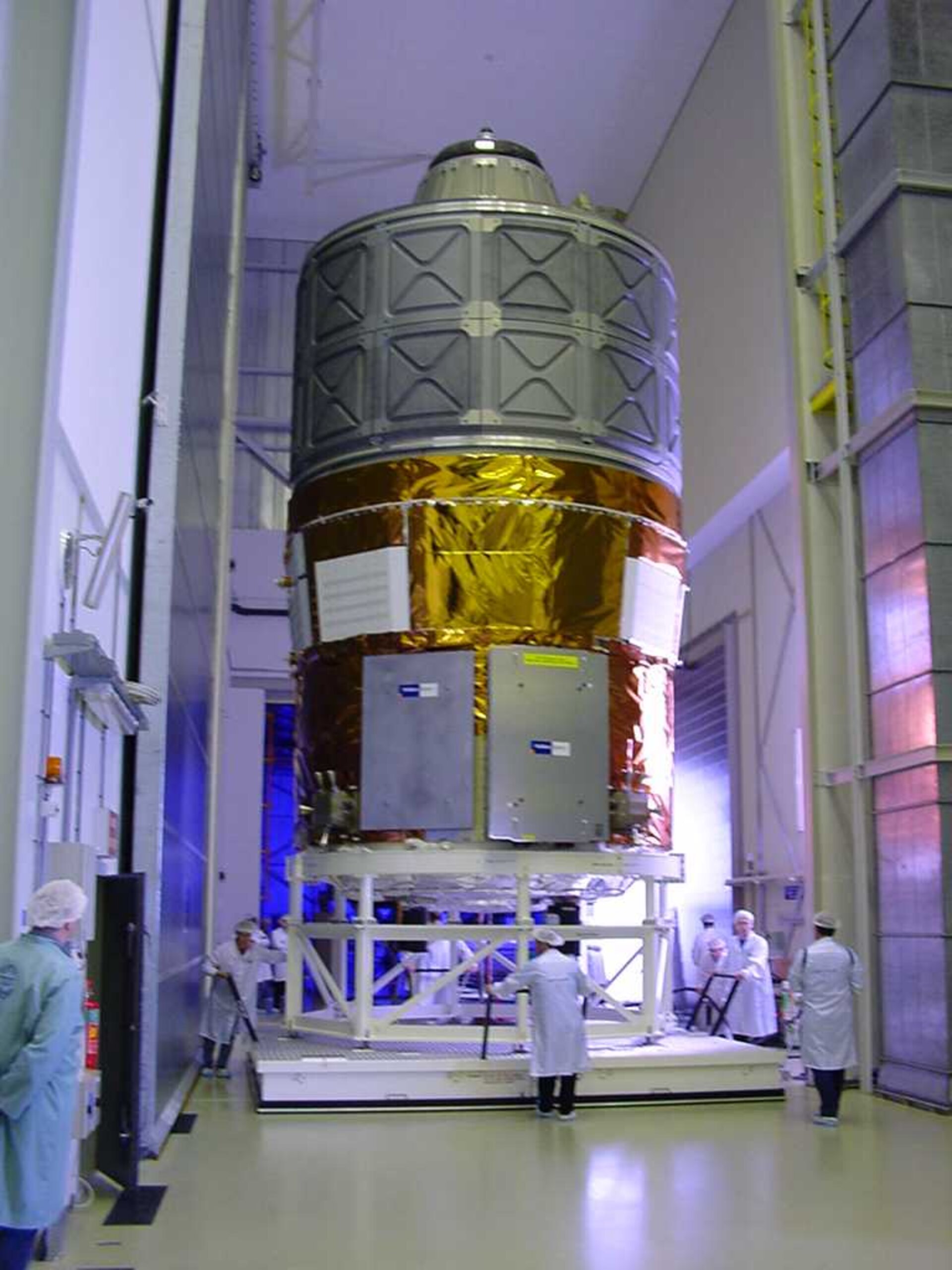 Thermal testing of the Automated Transfer Vehicle (ATV) was successfully completed in August 2002 at ESA’s test facilities in Noordwijk, The Netherlands. This was the final step of a ten-month test campaign for ESA’s ATV whose different segments have been transported from Noordwijk to various industrial facilities throughout Europe.

Since last December, the ATV Structural Thermal Model (STM), which is a structural and thermal replica of the actual ATV spaceship - the first of which, 'Jules Verne', is scheduled to fly to the International Space Station in 2007 – has been through a variety of tests, from acoustics to dynamic stress and deployment of solar panels.

The latest test, the crucial nine-day duration thermal test, simulated the deep space environment, the solar radiation and the earth infrared radiation stress, that ATV will encounter during different flight phases in orbit around the Earth. After launch from Kourou in French Guiana, ATV will navigate on its own for a three-day journey towards the Station, 400 kilometres above the Earth. ATV will remain docked as an integral part of the Station for up to six months, exposed to the harsh environment of space.

For the test, the ATV Structural Thermal Model (STM) was installed in a special chamber, called the Large Space Simulator (LSS). Then, extreme hot and cold environmental conditions, with temperatures as low as minus 193º Celsius, and depressurisation conditions were simulated - 24 hours a day - to ensure ATV can withstand the cosmic constraints of its orbital mission.

"Initial analysis has shown we had very good results after putting the structure to test at various levels throughout nine phases representing different flight condition scenarios", said Primo Tamburini, head of the mechanical, propulsion and thermal section of the ATV project.

About 700 temperature sensors and several pieces of electronic equipment were used to control and confirm that the crucial internal equipment of the ATV test model stayed well within the specifications. Thanks to the ATV’s active thermal control system, all the internal elements, which include propulsion, electrical power, computers and most of the avionics, were kept, as planned, at temperatures ranging from 5º C to 35º C. In early summer, important solar panel deployment tests were also successfully completed.

"The ATV test campaign for the STM has been completed a full two months in advance of the original schedule", Tamburini said.

For the testing, which has required about 25 people working rotating shifts to ensure 24-hour operations, all the different ATV segments were checked in the chamber (LSS) except for the Integrated Cargo Carrier (ICC) Pressurized Module, the cylinder section where astronauts will be able to work. In separate testing, the ICC Pressurized Module was adequately verified through computerized simulation. In June this module was sent to Turin-based Alenia Spazio. In the coming months, the model will be upgraded for use as a mock-up for crew training at the European Astronaut Centre (EAC) in Germany.

In September, the Integrated Cargo Carrier (ICC) external module, which is one of the main segments of ATV, was sent to Alenia Spazio, while the spacecraft has been sent to Astrium, Bremen, for equipment disassembly.

Construction of the first ATV flight model started last June. ‘Jules Verne’ will be the first of 7 ATVs planned for launch towards the ISS, starting in 2007 and continuing throughout the following ten years. Main elements of the flight model will be sent to ESA’s test facilities in Noordwijk in January 2004 for further qualification and acceptance testing. Already, about 1,500 people in different European countries are working at present time for this ESA 900-million Euro programme over ten years.