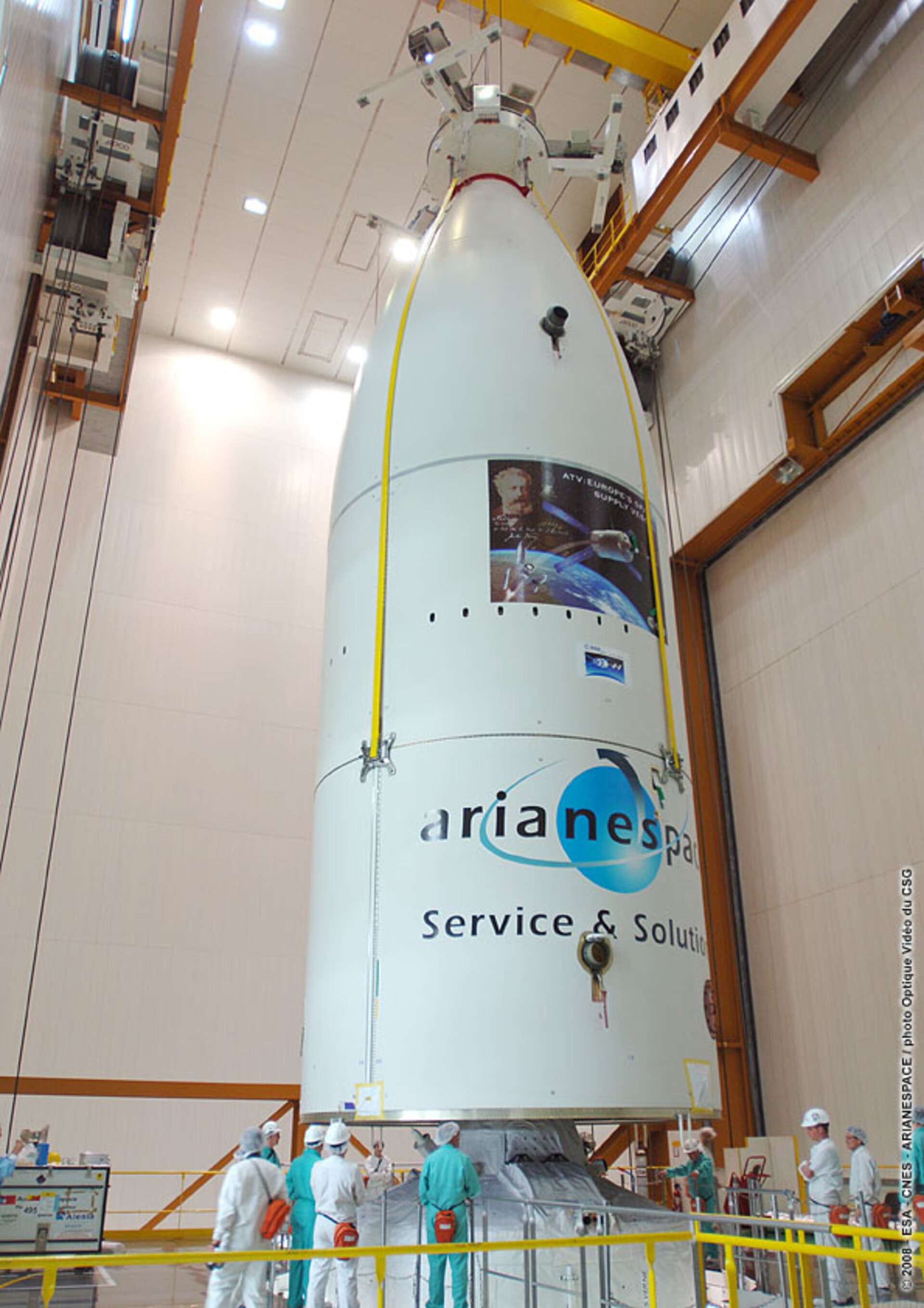 Jules Verne, the first Automated Transfer Vehicle, has been encapsulated in its huge fairing on top of the Ariane 5 launcher. With a total mass of about 19 360 kg, Jules Verne is the largest payload ever launched by Ariane 5. This historical mission with the first European space supplier for the ISS is scheduled for a night-time launch on 8 March at 04:23 UT.

In mid-February, Jules Verne Automated Transfer Vehicle (ATV), having been filled with a total of 6.5 tonnes of four different propellants and 20 kg of oxygen, was transferred in a payload container from the S5 building to the Ariane 5 Final Assembly Building at Europe's Spaceport in Kourou, French Guiana. Since then, Ariane 5 and ATV have been undergoing a complex combined operations plan.

The 19.4-tonne Jules Verne mass represents more than twice the heaviest single payload Ariane 5 has ever lifted in the past, including Envisat, ESA's 8-tonne environment satellite. To handle such a heavyweight, the Vehicle Equipment Bay which supports the ATV on top of the launcher, has been structurally redesigned and strengthened.

Through the upper level of the Final Assembly Building - the so-called 'chimney' - the cylindrical ATV was installed on top of Ariane 5 and carefully bolted to the launcher interface.

“Seeing the fairing encapsulation on Jules Verne was on the one hand a very exciting step in the final countdown to launch. On the other hand it was rather sad as we all knew we will not see again on Earth our old friend who we have been working with so closely over so many years,” said John Ellwood, ESA's ATV Project Manager.

During the coming week all connections – electrical, pyrotechnical and fluid interfaces – will be checked on ATV and Ariane 5. The entire spacecraft will be activated to check the spacecraft’s 'health', and to charge the batteries once again.

The entire cylindrical vehicle with its numerous protuberances, thrusters and antennas has been carefully covered with a white insulating foil layer (MLI / Multi Layer Insulator). This blanket thermally protects the ATV from the enormous temperature changes in orbit. Like a huge white thermal flask, the foil layer also keeps the interior of the vehicle at a constant temperature.

The exterior of the spacecraft has been thoroughly vacuum cleaned, removing every last small part or flake which could float around the ATV once the European vessel is in orbit. About 250 small 'remove before flight' flags and red covers were taken off one by one as each associated action was completed; including the protective covers on Jules Verne's rendezvous optical sensors.

On 25 February, after extensive checks and visual inspection of the ATV, the largest Ariane 5 fairing – a version measuring 17 metres in height and weighing 2500 kg – was successfully installed over the ATV. Besides the large Arianespace team in charge of the launcher, some 50 people from Astrium and its subcontractors (Thales Alenia Space, RSC Energia) and ESA have supported the integration of ATV over the last few weeks.

“The campaign has been very successful with no major issues and has kept perfectly to a tight schedule. Most of our teams have worked on two 8-hour shifts, six days a week. Some of the engineers and technicians have worked on this programme for 6 to 10 years. It was an emotional moment when the ATV was covered with its fairing. The next time anyone will see Jules Verne ATV, it will be in orbit for rendezvous in the first days of April”, said Nicolas Chamussy, ATV Programme Manager for EADS Astrium.

One week before launch, all the launch teams and different control centres around the world will simulate a full 10-hour countdown to lift-off with the real Ariane 5 and ATV vehicle. After the launch onboard Ariane 5, the ATV's high-precision navigation system will guide the spacecraft to the International Space Station, with docking planned in early April.