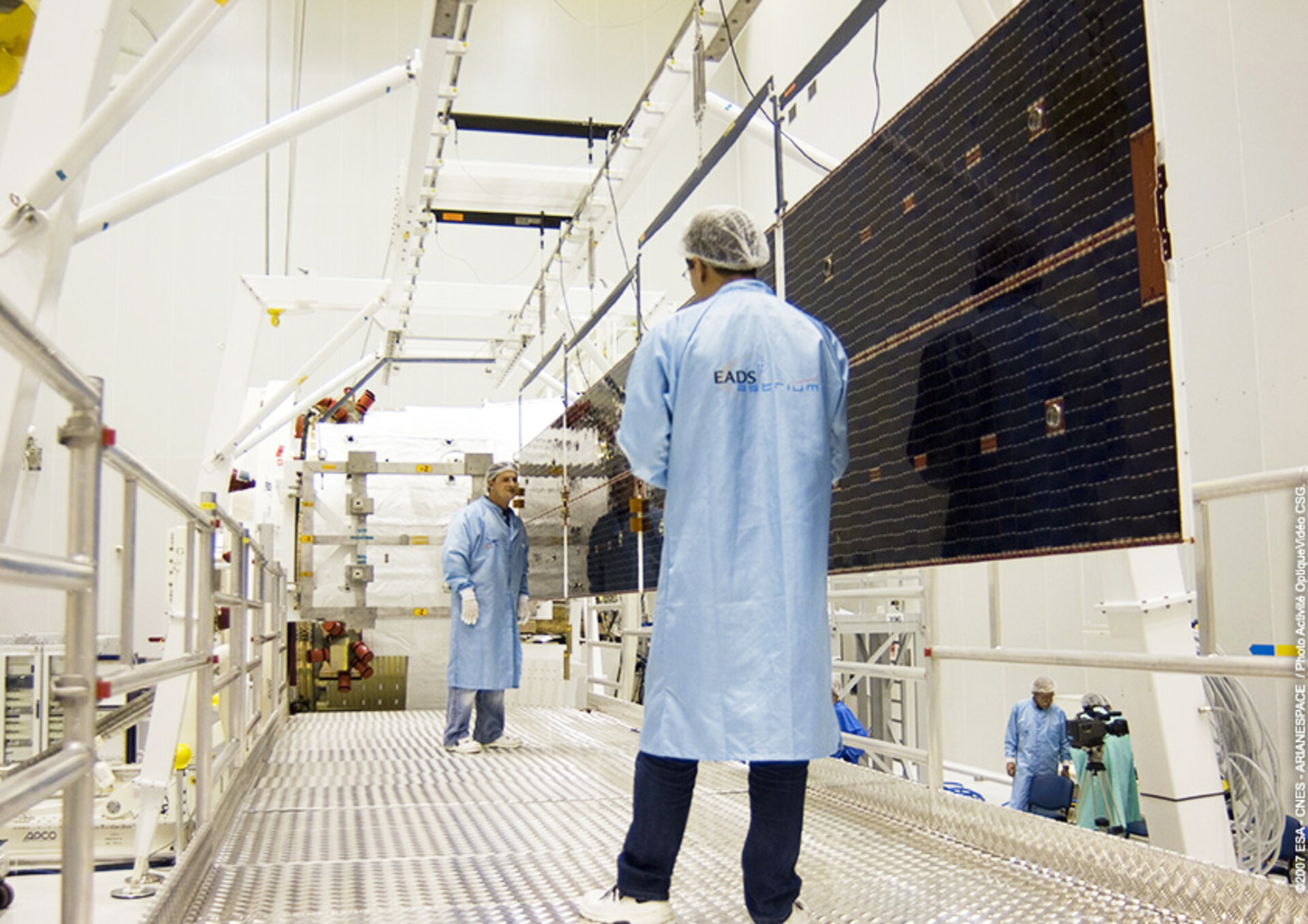 The next time Jules Verne ATV’s four solar arrays are fully deployed, giving the vehicle a total span of 22.3 m, will be in early 2008, at 28 000 km/h over the South Pacific Ocean. Just 100 minutes after lift-off, following separation from the Ariane 5 launcher, the x-shaped solar arrays will give the European vessel its characteristic dragonfly appearance.

The automatic deployment of these metallic blue 'wings' and the activation of the on-board navigation systems will transform the 20-tonne Automated Transfer Vehicle (ATV) into a fully automatic spaceship navigating towards the International Space Station (ISS).

To make sure that this crucial and irreversible phase of deployment occurs smoothly in orbit, engineers have worked solidly for two weeks in November in the giant integration 'white room' at Europe's Spaceport near Kourou, French Guiana, to install and test the four huge solar arrays. This final and successful step has taken place after several years of efforts and challenges.

"The test went well despite the fragility of the solar arrays. It proves that the ATV solar power, designed for up to six months in orbit, is working fine", said Detlef Otto, who is in charge of the ATV power system for ESA and who supervised the test.

The bus-sized ATV spacecraft had to be rotated into a horizontal position for the integration of the solar panels. The panels were fully deployed and then folded again and latched, ready to fly. Each panel was minutely inspected before final integration.

Since the solar arrays have been engineered to work in weightlessness, their 9.15 m-long structure is so light that they cannot be unfolded on Earth without being supported by several cables. “Otherwise, in Earth's gravity, the solar panels could not hold their own weight of 7kg without bending irreversibly”, said Detlef Otto. The system is so sensitive that during the arrays' deployment tests even the barely noticeable air conditioning flow had to be turned off in the huge integration hall.

But the five-year effort to develop the ATV 'wings' and their rotation mechanisms, that enable the outstretched solar panels to constantly track the Sun as the ATV circles the Earth, have been a challenge until recently. During several years of testing, the state of the art solar panels have been deployed and checked about 50 times by the engineers at Dutch Space, who built them.

Some tricky issues related to the solar panel rotation mechanisms, built by Thales Alenia Space in Cannes, France, have put some pressure on the timeline. Constant tracking with these mechanisms permits the most efficient generation of electrical power for the ATV in orbit and during its six-month long ISS docking phase.

The four 4-kg rotation mechanisms have been checked and removed from the ATV several times to solve some minor problems of resistance and lately, some contamination issues due to metal particles found in one of the mechanisms.

Once deployed, the four solar arrays provide electrical power to ATV and to its rechargeable batteries so that the eclipse periods in orbit can be bridged. Silicon-based solar cells, developed and produced in Germany by RWE Space Solar Power, cover the four panels per array with a total surface of 33.6m² (4 x 8.4m²), and are able to produce an average of 4800 Watts.

Mounted on the ATV service module, the four sun-tracking arrays are totally independent and can get the best orientation to the Sun thanks to the rotating mechanisms. The ATV solar power sources are built to tolerate the loss of one of the four independent arrays and their respective power chains.

“Now we feel confident, although the next challenge will be the 6-month attached phase with the Station because he ATV wings will have to withstand millions of vibrations and oscillations due to the ISS crew activity and the Station jets”, said Detlef Otto.