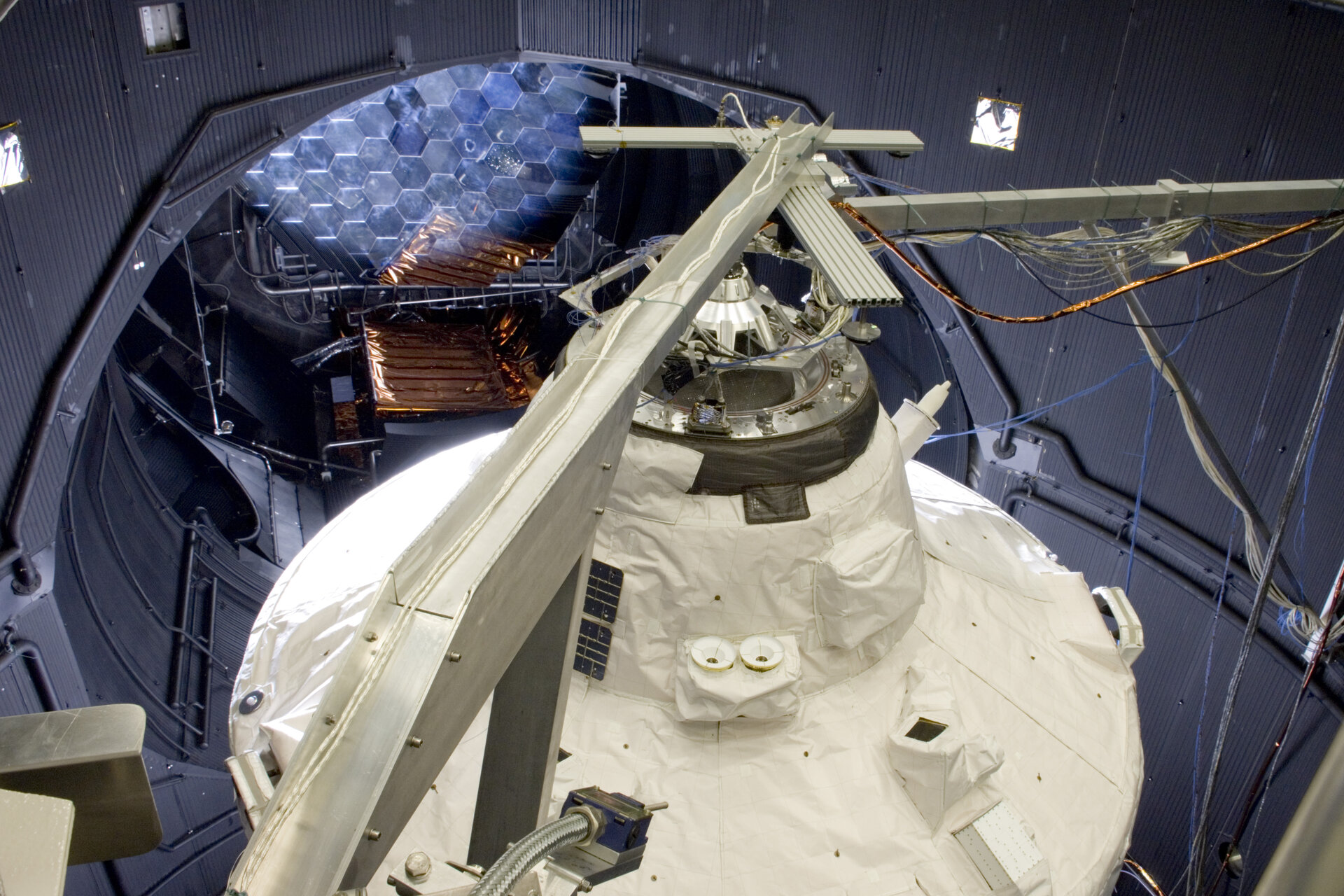 For 21 days in a row, Jules Verne, the first Automated Transfer Vehicle (ATV), has not only survived the most stringent conditions of the space environment, but it has successfully tested on the ground its flight software and hardware under the toughest simulated conditions of space vacuum, freezing temperatures and burning sun radiation.

Jules Verne ATV, the most complex spacecraft ever developed in Europe, is due to make its inaugural flight atop an Ariane 5 in summer 2007 to re-supply the International Space Station. It has just completed its most exhaustive test campaign at ESA’s test facilities at ESTEC, in Noordwijk, the Netherlands.

"Started on 22 November, the test campaign, with different cycles of cold and hot phases, has been performed according to schedule and the 'behaviour' of this complex spaceship has been generally in line with the expected one when reacting to the cold and hot environment", said Bachisio Dore, the ESA ATV manager of Assembly Integration & Verification (AIV). "The successful completion of this test campaign represents a major milestone for the ATV Programme."

The most challenging aspect of the test has been for Jules Verne ATV to keep its temperatures within strict limits compatible with all the thousands parts of hardware which make up its sophisticated subsystems. Specific software and new technology enable ATV to balance the temperatures on the spaceship and allow it to fly smoothly in the freezing darkness, the burning sunshine radiation and in the vacuum of the orbital environment.

"It is like putting your computer laptop in the freezer, then exposing it to the Sun in the summer heat and back again to the freezer while you are continually using it", explained one of the 35 Astrium and subcontractor engineers who are monitoring the spacecraft round the clock, seven days a week.

Jules Verne is no laptop – it is a 20-tonne spacecraft, the size of a double-decker bus, with dozens of powerful computers and a large amount of electronics. Its software of one million lines of code makes it the largest and most elaborate ever developed in Europe.

The 625 built-in thermal sensors and another 250 extra sensors, especially added inside and around Jules Verne for the test, have been carefully monitoring that the temperatures remain within their acceptable limits around the clock.

At the same time, inside the huge 2 300 m³ Large Space Simulator (LSS) chamber, in-orbit environmental conditions and thermal cycles have been reproduced. A typical vacuum level of one-millionth of a millibar was achieved, the outside chamber temperature was lowered to minus 30°C or minus 80°C according to the test cycle; and for short periods, the Sun simulator was activated, providing a horizontal solar beam of 6-metre diameter, to radiate a powerful flux of 1400 Watts per square metre on the dazzling white layer protecting Jules Verne.

The ATV consists of two main modules with their own temperature requirements. The pressurized Integrated Cargo Carrier, with its 48m³ compartment dedicated to carry the entire re-supply cargo to the Station (with a maximum mass of 7 667 kg). This module, which docks to the ISS, must remain between 20°C and 30°C between launch and docking, and during the attached phase with the ISS, especially when refuelling propellant is transferred to the Station.

The non-pressurized avionics/propulsion module, which includes rocket engines, electrical power, electronics, computers, communications and the avionics, has to remain between 0°C and 40°C.

The avionics bay, which is the brain of the ATV, produces its own heat from the large numbers of electronic equipment, and at the same time manages a very sophisticated system to control overheating. "Thanks to 40 state-of-the-art variable conductance heat pipes located in the avionics bay, the ATV is able to carry away the heat and release the energy directly into space or, otherwise, to warm up other parts in a very economic fashion. This new technology means we can get rid of 50% more energy for the whole spaceship, and still maintain the right internal temperature environment", explains Patrick Oger, an Astrium thermal engineer.

Another objective of the test was to monitor the outgassing of the ATV, caused by some materials of the spaceship which, under vacuum conditions, release some internal gases that are usually trapped inside them. ATV gas samples were collected during the tests in the vacuum chamber and will be later analyzed. The aerospace engineers want to be sure that ATV gases do not contaminate the critical mechanisms of the spacecraft, like those that rotate the solar panels towards the Sun. Their rotation at different temperatures performed properly, even though the four solar panels were not mounted on the ATV for the test.

The main objective of the test was to verify that under the thermal vacuum environment all the hardware items are working together properly. To achieve this goal for a complex spacecraft such ATV, the development, tuning and validation by Astrium engineers of about one thousand test procedures and automated test sequences were required.

For example, during the test, ATV engineers also activated some of the moving parts of the spaceship. As soon as the order was given to extend or retract the probe of the docking system, they were able to see it moving slowly, while looking through the small LSS windows near the top of the spaceship.

In the final days of testing, several simulated firings of the 32 engine thrusters were performed with helium gas, in order to verify the proper interaction between the propulsion and avionics subsystems. Additionally all the hardware needed by ATV to perform emergency manoeuvres to avoid collision with the ISS was tested during the thermal tests by simulating the performance of four such manoeuvres.

"Thanks to these extensive tests, it has been possible to validate the whole ATV, that is to say all the hardware while it was reacting to the harsh orbital conditions. At the same time we could check the complete performance of the hardware and software needed for power and thermal control under close-to-space conditions", says Marc Chevalier, the Astrium ATV manager of the Assembly Integration Test (AIT). "This successful test will also show us some minor improvements in the software procedures which it would be good to implement."

In the coming weeks, about 50 gigabytes of test data stored during the 270 hours of functional testing performed during the thermal test, which have been archived, will be carefully analyzed to be sure that any minor anomalies or bugs are fully understood.