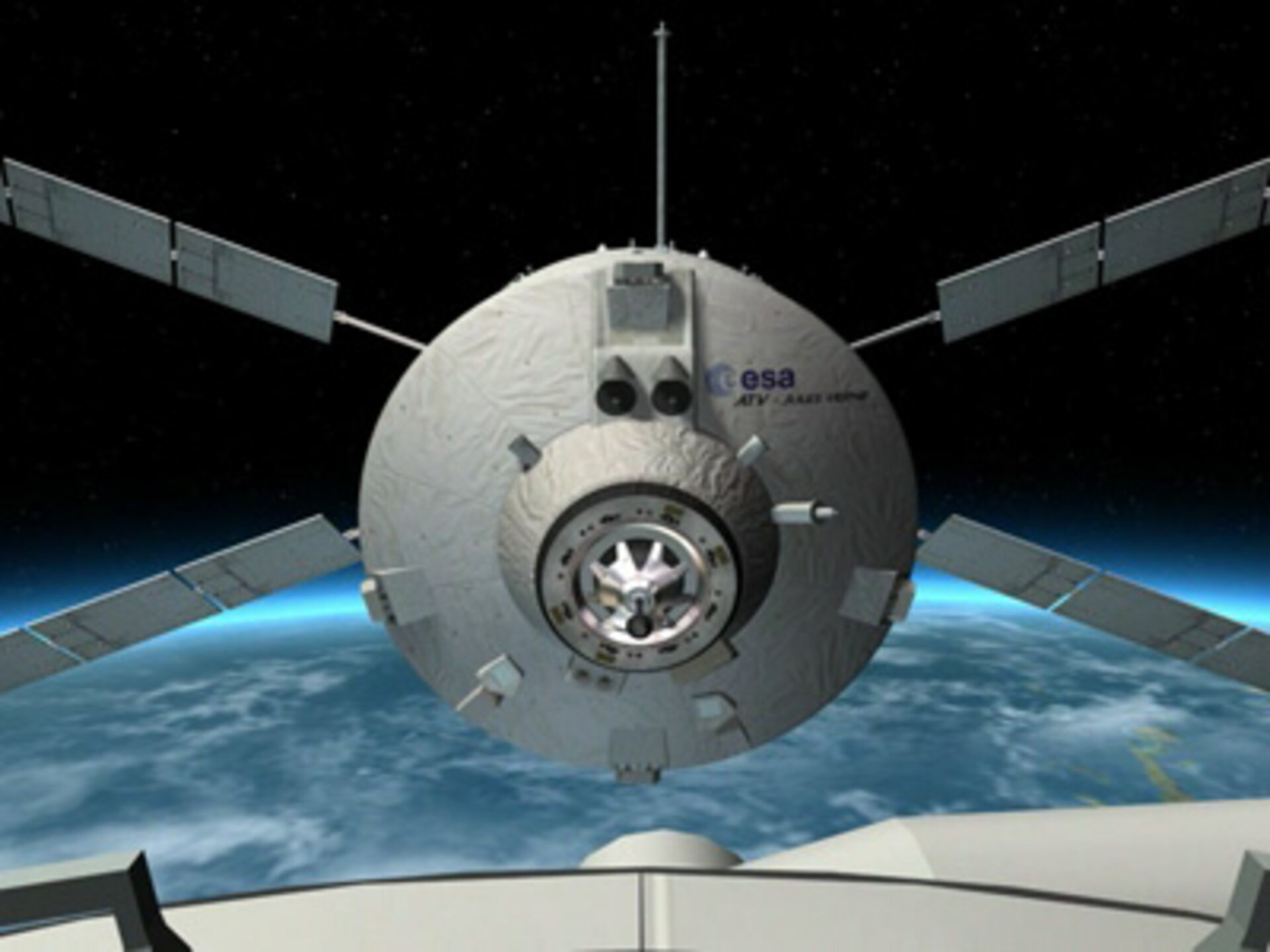 In just a few days time, the historic Jules Verne mission will draw to an end. After the ATV Control Centre commands the opening of the Automated Transfer Vehicle hooks, ESA's first resupply and reboost vehicle will perform a fully automated undocking with the International Space Station on 5 September at 23:30 CEST (21:30 UT).

The undocking of the Automated Transfer Vehicle (ATV) will conclude the remarkably successful five-month attached phase of the mission, and mark the end of Jules Verne's main servicing mission to deliver cargo, propellant, water, oxygen and propulsion capacity to the Station. Since its perfect launch on 9 March, Jules Verne ATV has achieved each scheduled objective and much more.

Following a successful test of its anti-collision manoeuvre system, ATV demonstrated the high level performance of its precise rendezvous piloting, navigation and control. Then, after a superb final approach and docking on 3 April, the spacecraft completed all resupply tasks and even provided capabilities unplanned before its mission, such as a debris avoidance manoeuvre for the International Space Station (ISS), recovering large amounts of stored condensation water from the ISS in its empty tanks and offering a new comfortable sleeping area for Space Station crew members.

After automatically transferring its entire 811 kg of refuelling propellant to the Station in June and resupplying the orbital outpost with 269 litres of water and 21 kg of air, ATV activities during the last week of August were dedicated to transferring dozens of white cargo bags from the ATV's pressurized cabin to the ISS.

A lot of moving in and out

"Over the last 7 days, the ISS crew has spent 31 hours in their heavy schedule to carry, as planned, the remaining 900 kg (of the original 1150 kg) of dry cargo from the ATV to the Station," said Hervé Côme, ESA's ATV Mission Director at the ATV Control Centre (ATV-CC) in Toulouse, France.

The three ISS crew members, Sergei Volkov, Oleg Kononenko, Greg Chamitoff have been 'flying' back and forth in microgravity through the ATV's open hatch, carrying food, clothes and equipment, as well as two original manuscripts handwritten by Jules Verne and a 19th century illustrated edition of his novel 'From the Earth to the Moon'.

The astronauts have also worked hard carrying items in the opposite direction, loading waste and excess equipment from the ISS into the racks and spaces left empty inside Jules Verne.

The total dry cargo waste loaded into ATV represents 816 kg of material no longer needed on the Station. On top of that, 264 kg of liquid waste has been transferred from the Station to the ATV's water tanks. This weight does not include the accommodation hardware, such as the racks and bags that store the dry cargo and liquid waste.

Russian ISS Commander Sergei Volkov, performed a special deck inspection of the ATV to check on possible condensation and to measure shell temperature of the ESA spaceship. Although there was no safety concern, this measure was implemented after the discovery early in the flight that several external layers of MLI (Multi-Layer Insulation) had shifted during launch, exposing the ATV's hull in several locations without thermal insulation. Using a 'Scopemeter' with a thermal probe, Volkov confirmed the temperature to be well within normal margins.

"Jules Verne ATV is a very crew-friendly spaceship as it puts a minimal training workload on the crew before the flight and, once docked to ISS, it became one of the best places for the crew to live", said Jean-François Clervoy, ATV senior advisor and a member of ESA's Astronaut Corps.

Regular ISS reboosts are needed to overcome the effects of residual atmospheric drag, which made the Station lose about 50 m in altitude per day during August. On 13 August, for the fourth time since arriving in April, ESA's Jules Verne ATV was used to raise the orbit of the 300-tonne Station to an altitude of around 355 km above the Earth's surface.

Several times ATV has also been able to provide an alternative means of attitude control (i.e. orientation control) to the ISS. On 27 August, for the first time, Jules Verne ATV was also used to perform a debris avoidance manoeuvre, steering the Station clear of potentially dangerous space debris.

Once its resupply mission is completed, the ATV, with its waste securely strapped and stored in the racks, will be manually closed by the crew on 4 September. A day later, Jules Verne ATV will be separated under control of the ATV-CC and Russian Mission Control Centre in Moscow (MCC-M).

A few weeks later, on 29 September, the ATV main engines will use their remaining fuel in two separate deorbit boosts to terminate the 3-week solo flight of Jules Verne. They will deorbit the 13.5-tonne spacecraft on a steep flight path, performing a controlled destructive re-entry high above a completely uninhabited area of the Pacific Ocean. The planning of this event in the night time will allow observation from two aircrafts containing a collection of ESA and NASA scientific experiments allowing optical imaging and spectrometric observations. In addition, the ISS crew might be able to observe ATV re-entry with the Russian ultraviolet and spectrometric instrument called FIALKA.