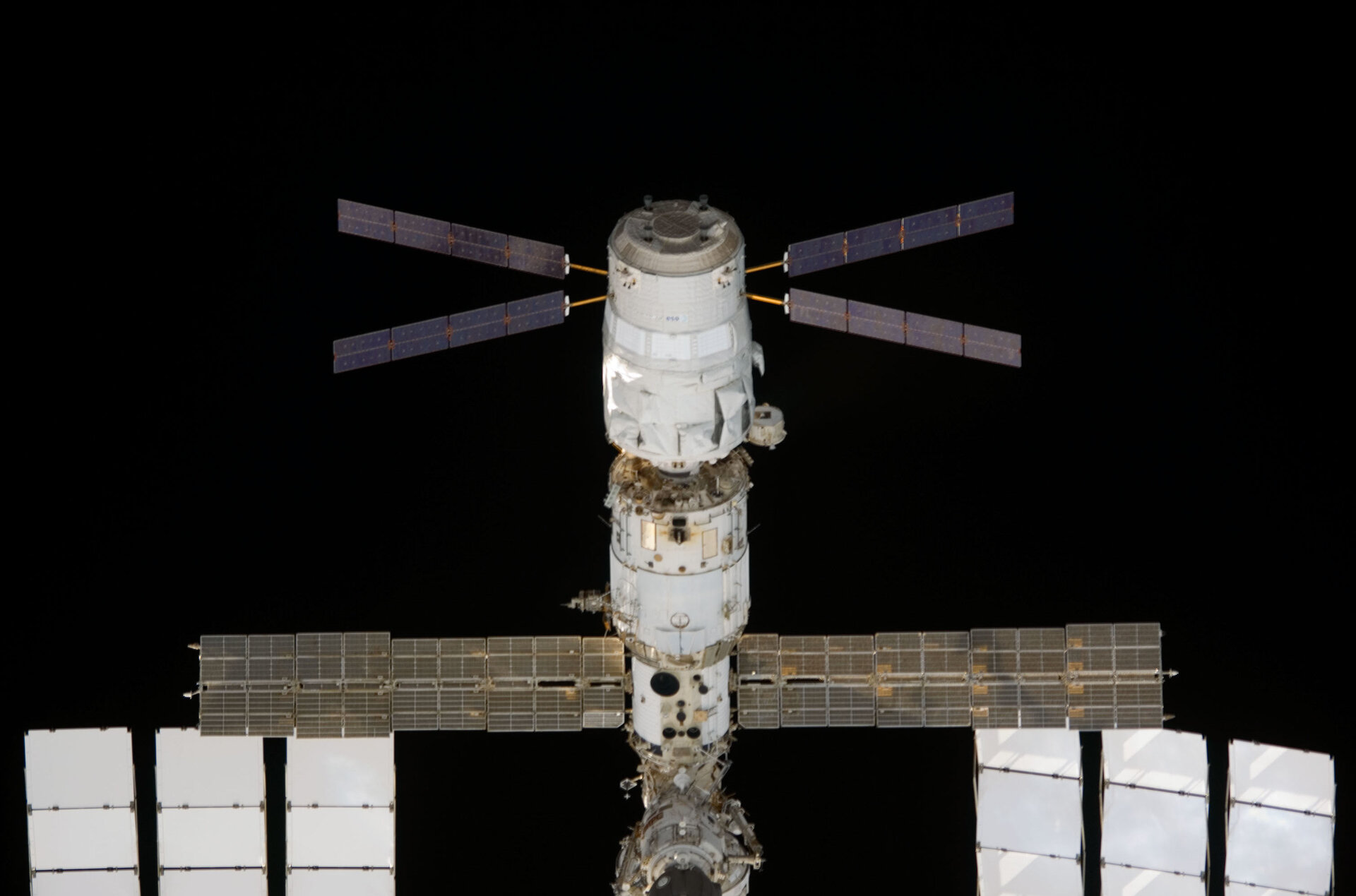 In September 2004, the mission of the first Automated Transfer Vehicle (ATV), named Jules Verne, marks the first rendezvous and docking for a European spacecraft. It also represents the most demanding and complex of 7 ATV missions planned from 2007 to 2014 to re-supply the International Space Station (ISS).

It is up to Jules Verne to demonstrate that, under the responsibility of the ATV Control Centre (ATV-CC) in Toulouse, it can automatically - and safely - handle any contingency plans for the safety of the ISS crew.

The complexity of this first mission arises from its various scenario objectives. This demonstration flight must test and prove that the 20.7-tonne cargo ship can interrupt the rendezvous - at any time - by stopping its motion and by flying away from the 178-tonne ISS.

When Jules Verne is 225 metres behind and below ISS, it will simulate an escape manoeuvre directed automatically by its own active Guidance, Navigation and Control (GNC) system; that is to say, its own autopilot. The bus-sized cylindrical ESA spaceship (10m length by 4.5m diameter) will safely stop, back up or drift away from the Space Station for a while before initiating a new approach attempt.

One day later, at a distance of 20 metres from ISS, another safety system will be put to the test. Simulating a major malfunction during the final rendezvous phase, the ATV-CC or the ISS crew will initiate a Collision Avoidance Manoeuvre (CAM) to remotely direct Jules Verne away from the Station. Unlike the escape manoeuvre described above, a safety unit totally independent from the regular GNC controls this abort manoeuvre. It provides an additional safety layer that permanently supervises ATV performance.

It is only during the third attempt on the third day - once the ATV is back to its previous rendezvous ‘hold’ position - that it will safely resume its final approach and go all the way to docking. Europe’s first ever automated space rendezvous will take Jules Verne between 7 and 10 days to fulfil its multi-scenario mission. The second ATV nominal rendezvous mission, a year later, will only take 3 to 5 days to reach ISS.

Jules Verne is launched from French Guiana by an Ariane-5 and injected into a 51.6 degree orbit, the same as that of ISS, at an altitude of around 230 km, compared to the Station’s altitude of around 400 km. Approximately 75 minutes after lift-off, when separation from the launcher is confirmed, the ATV becomes a fully automated spaceship.

From the initial orbital injection to docking with ISS, the ATV executes automated sequences (solar panel and antenna deployment) and manoeuvres, which are computed, loaded and monitored by the ATV-CC at CNES's Toulouse facility, via NASA’s Tracking and Data Relay Satellite System (TDRSS) and ESA’s Artemis data relay network.

When the ATV is within 30 km of ISS and 6 km below it, it sets up a direct microwave link with the Station, allowing the ATV to initiate relative and accurate navigation to ISS using also GPS technology. As it gets closer to its objective, ATV-CC ground controllers direct Jules Verne to a step-by-step predefined approach. This approach requires authorisation from the Mission Control Centre in Moscow (MCC-M) - because it docks on the Russian Zvezda segment of ISS - and an overall coordination with Mission Control Centre in Houston (MCC-H), which is responsible for the entire ISS. For each of these steps, the ATV performs automated manoeuvres.

“It’s a remarkable automated spacecraft,” says Philippe Estaque, one of the flight directors at the ATV Control Centre in Toulouse. “If everything is nominal, that is, according to the flight operations plan, the ATV will handle many operations on its own, all the while being monitored and controlled by the ATV-CC. For controllers like us, accustomed to monitoring satellites, even of the new generation, the ATV operations are a great challenge. Actually, we have to develop a new operation concept, because of the spaceship specificities and the involvement of other entities, like the Mission Control Centres in Moscow and Houston and ISS crew, for joint operations.”

These built-in automatic capabilities of the ATV are crucial requirements to be compatible with the demanding requirements of human spaceflight safety.

For the final rendezvous manoeuvres, the ATV uses its eye-like sensors, combined with additional parallel measurement systems, which ensure an automatic docking with an incredible 1.5 cm precision while the spacecraft and ISS are circling the Earth at 28 000 km/h. “The first European rendezvous spacecraft is expected to dock with ISS with the accuracy of the size of a one Euro coin”, says ESA astronaut Jean-François Clervoy, Senior Advisor to the ATV programme.

At any given moment during the approach phase - based on detection by sensors or a decision by the Station crew or the ATV-CC - the rendezvous operations can be suspended and resumed, or even postponed. Jules Verne will demonstrate all these capabilities and re-supply ISS with 6.7 tonnes of water, refuelling propellant for the Station, and dry cargo such as bags.

When docking is completed, Jules Verne will be an intrinsic part of ISS for up to six months.

During the highly critical phases of the ATV flight, from launch to the docking with ISS, and from departure to re-entry, the entire 60-person control team in the ATV-CC will work in three adjacent control rooms separated by large glass walls.

During the attached phase, when the ATV is in a dormant mode, the control team in Toulouse, with two team members working in shifts, will monitor and control the ATV 24 hours a day. In case of emergency, a complete team could be reactivated within an hour.

The official language during all ATV operations is English, including the communications with Moscow and Houston.

After six months of being an extension of the Station, Jules Verne, loaded with up to 6.5 tonnes of waste, will separate from ISS with the same safe procedures performed for docking and then burn up completely during a guided and controlled re-entry high over the Pacific Ocean.