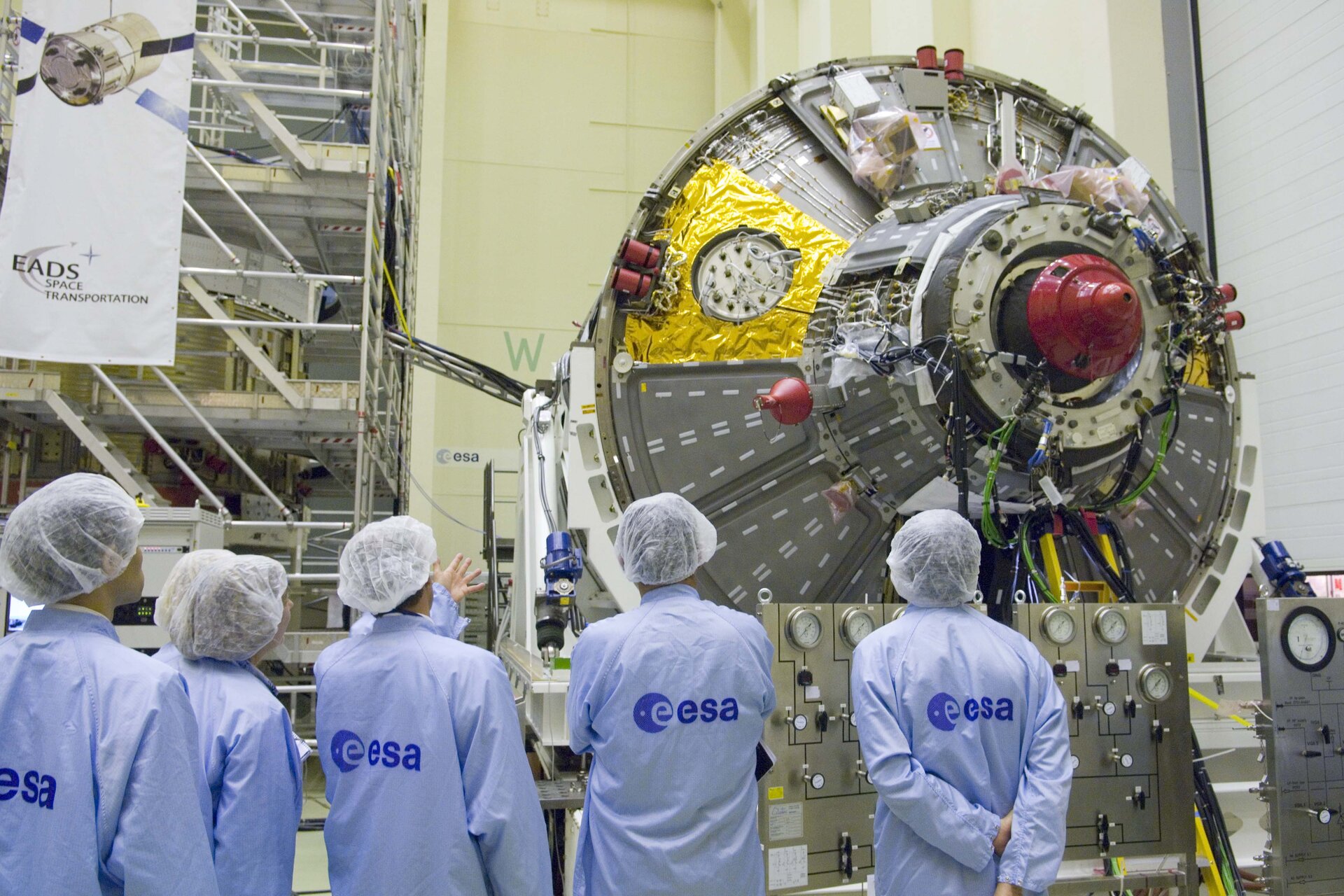 Last week, members of the international press visited the clean rooms at ESTEC, ESA's research and technology centre, in Noordwijk, the Netherlands, to view the Automated Transfer Vehicle for the very last time in Europe.

In mid-July the spaceship will leave for the launch site at Europe's Spaceport in Kourou, French Guiana. The Automated Transfer Vehicle (ATV) is presented in two sections. The section containing rocket engines, flight electronics and the propellant is still surrounded with 10-metre high scaffolding. The journalists get their last glimpse of the thousands of wires, each painstakingly labelled and neatly concealed in the interior of the spacecraft.

Just beyond that stands the second section - the front of the spacecraft. The docking mechanism and laser cameras are covered for protection. The opposite end remains open. This is the carrier of the fluid cargo (air, oxygen, refuelling propellant and water) and the dry cargo (food, clothes, experiments and personal items for the astronauts) which is delivered to the International Space Station (ISS).

Once docked with the Space Station, this pressurised 'storage cupboard' will provide the astronauts with extra working space. After six months of dutiful service, this cupboard will be loaded with Station waste before the ATV is undocked for a destructive re-entry into the Earth's atmosphere.

As well as the two main spacecraft sections, the clean rooms are littered with hundreds of smaller items that are also heading for French Guiana. Outside there are more still. Transport crates containing parts, apparatus and special tools. Together it adds up to 400 tonnes of hardware, whilst the ATV itself weighs 'just' 11 tonnes when empty.

During its stay in the ESTEC Test Centre, the first ATV, named Jules Verne, was thoroughly put through its paces. These included testing in the electromagnetic chamber. There the spacecraft was assessed for electromagnetic interference. In layman's terms: to check that none of the electrical apparatus interfered with each other – like the windscreen wipers in an old car that cause static on the radio.

Once ATV was shown to be electrically sound, the spacecraft was moved to the acoustic chamber; here it was shown to be able to withstand the noise and vibrations of launch with the Ariane 5 rocket. And finally, a three-week test in the Large Space Simulator confirmed that all components will function properly in the vacuum and extreme temperatures of the space environment.

'We are very happy and proud that ATV is about to leave ESTEC', said Daniel Sacotte, ESA's Director of Human Spaceflight, Microgravity and Exploration. 'Today marks the end of a long test campaign and the start of the launch campaign. Once ATV is launched, Europe can start to fully utilise the International Space Station.'

Jules Verne is the first of five ATVs ESA plans to use to send cargo to the Station. The development, production and launch of the first vehicle have cost over 11 years around 1.3 billion Euros. Each of the following ATVs assembly and launch will cost just over 300 million Euros. In this way Europe will pay for utilisation of the ISS, which includes conducting scientific experiments and astronaut missions.

'ATV is much more that a spaceship', emphasises ATV Project Manager John Ellwood with justified pride. 'It is a cargo ship, a laboratory, a rocket and two spacecrafts all in one. The primary spacecraft performs all the nominal tasks and we have a completely independent back-up spacecraft which will take over if there is any question of safety.’

ATV will go down in history as the first spacecraft that automatically and safely docks with the ISS without a full manual override capability. 'If it goes to plan', explains Jean-François Clervoy, ESA astronaut and ATV project advisor, 'the crew on board ISS won't have to do much. They only have to transfer the cargo from ATV to the Station.' Of course the astronauts are trained to intervene if any potentially dangerous situation arises.

In mid-July ATV leaves - along with all the items necessary for launch – by boat to French Guiana. There, the eighteen-week launch campaign will get underway. The two ATV sections will be bolted together. The solar arrays will be mounted, fuel tanks filled and many last checks performed to make sure the launch goes without a single hitch.

At the same time, ten simulations will take place between the various control centres involved in the mission. ESA's ATV Control Centre, in Toulouse, France, NASA's Johnson Space Centre, in Houston, the United States, and the Russian Control Centre, TsUP, in Moscow, will run through the mission from launch, through to docking and finally to re-entry, pinpointing any potential problems. Sacotte: 'The ATV campaign is highly complex and there is still a lot to be done. But if we are to launch at the start of next year, we will be fully prepared.'