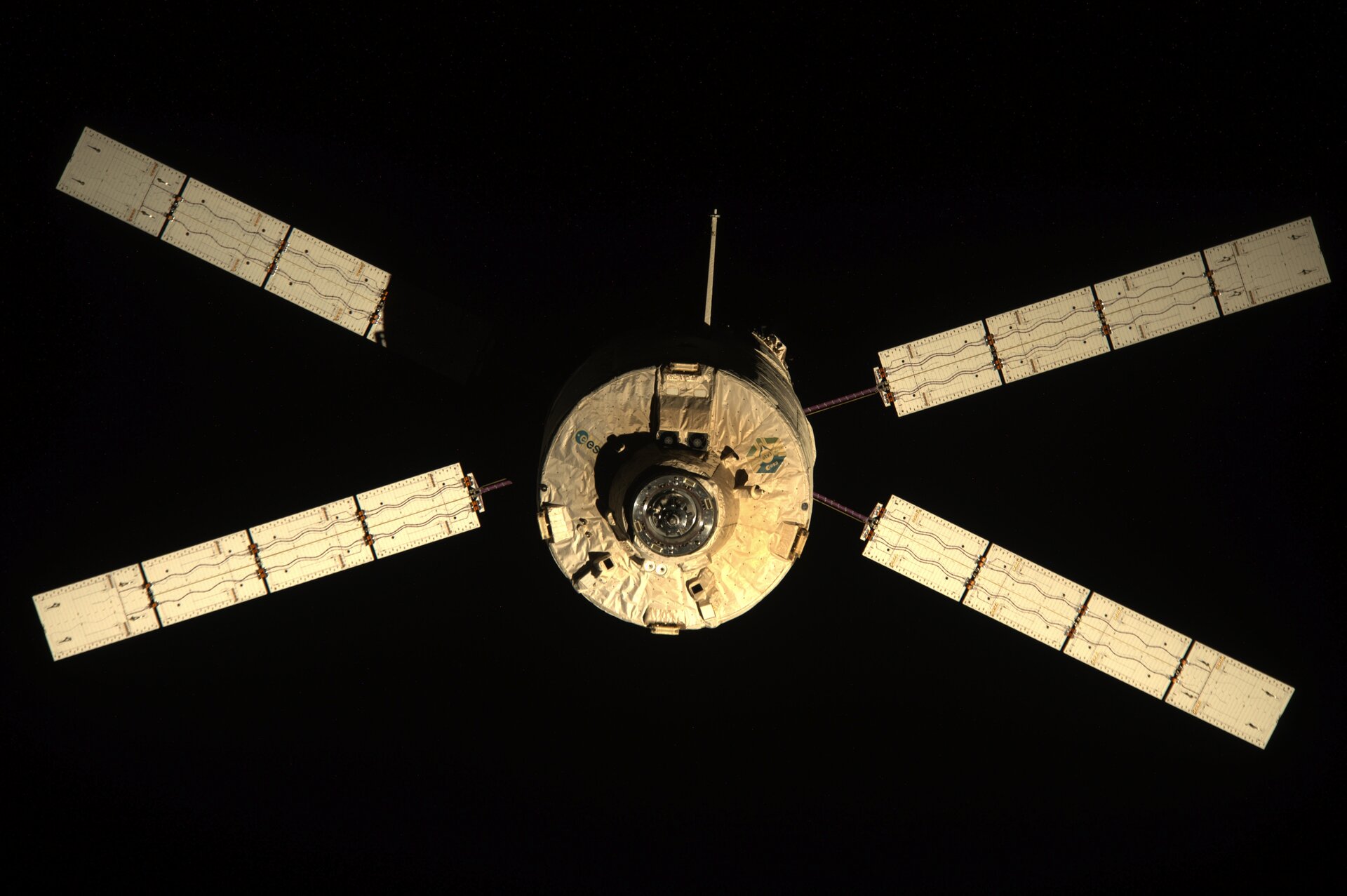 PR 32 2012 - ESA's third Automated Transfer Vehicle cargo ferry, Edoardo Amaldi, completed the final part of its highly successful six-month servicing mission to the International Space Station by reentering the atmosphere today and burning up as planned over an uninhabited area of the southern Pacific ocean.

Automated Transfer Vehicles (ATVs) are the most complex space vehicles ever developed in Europe and are the largest and most capable resupply ships to dock with the Space Station.

They are also the heaviest spacecraft in the world, weighing more than 20 tonnes at launch.

Their cargo load and propellant transfer capacity is unmatched and they can be used as space tugs to manoeuvre the entire 400-tonne ISS either to higher altitudes or to move it out of the way of space debris.

The dry cargo consisted of more than a hundred of bags packed into eight racks – two more racks than on previous ATV missions.

ATV-3 was lofted to orbit on 23 March by an Ariane 5 launcher and docked with the Space Station five days later.

ATVs perform all manoeuvres, including docking autonomously, under close surveillance by their control centre in Toulouse, France run jointly by ESA and CNES.

So far, ATVs and Russian vehicles Progress and Soyuz are the only vehicles able to dock with the Station fully autonomously, with built-in redundancy.

While docked, the ATV-3 performed nine reboosts to keep the Space Station in orbit, counteracting the effects of atmospheric drag.

Without reboosts by ATV and Russia’s Progress vehicles, the Station would eventually fall back to Earth.

On 22 August, ATV-3’s eighth boost lasted for 40 minutes (nearly half an orbit) and raised the Station to new heights – a record-breaking 405 x 427 km above Earth.

During the six months that ATV-3 spent at the Station, it provided 48 cubic metres of extra space for the astronauts. Before its departure, the crew loaded its pressurised module with waste material.

The European ferry undocked on 28 September and after a short free flight, it manoeuvred into a safe reentry trajectory. Edoardo Amaldi and its waste burnt up harmlessly in the upper atmosphere at 01:30 GMT (03:30 CEST).

Its successor, ATV Albert Einstein, is already set to deliver the next round of supplies to the Station. It arrived by boat at Europe’s Spaceport, in Kourou, French Guiana on 19 September and is scheduled for launch in April 2013.

ATV Georges Lemaître is being assembled and is scheduled to be launched in April 2014.