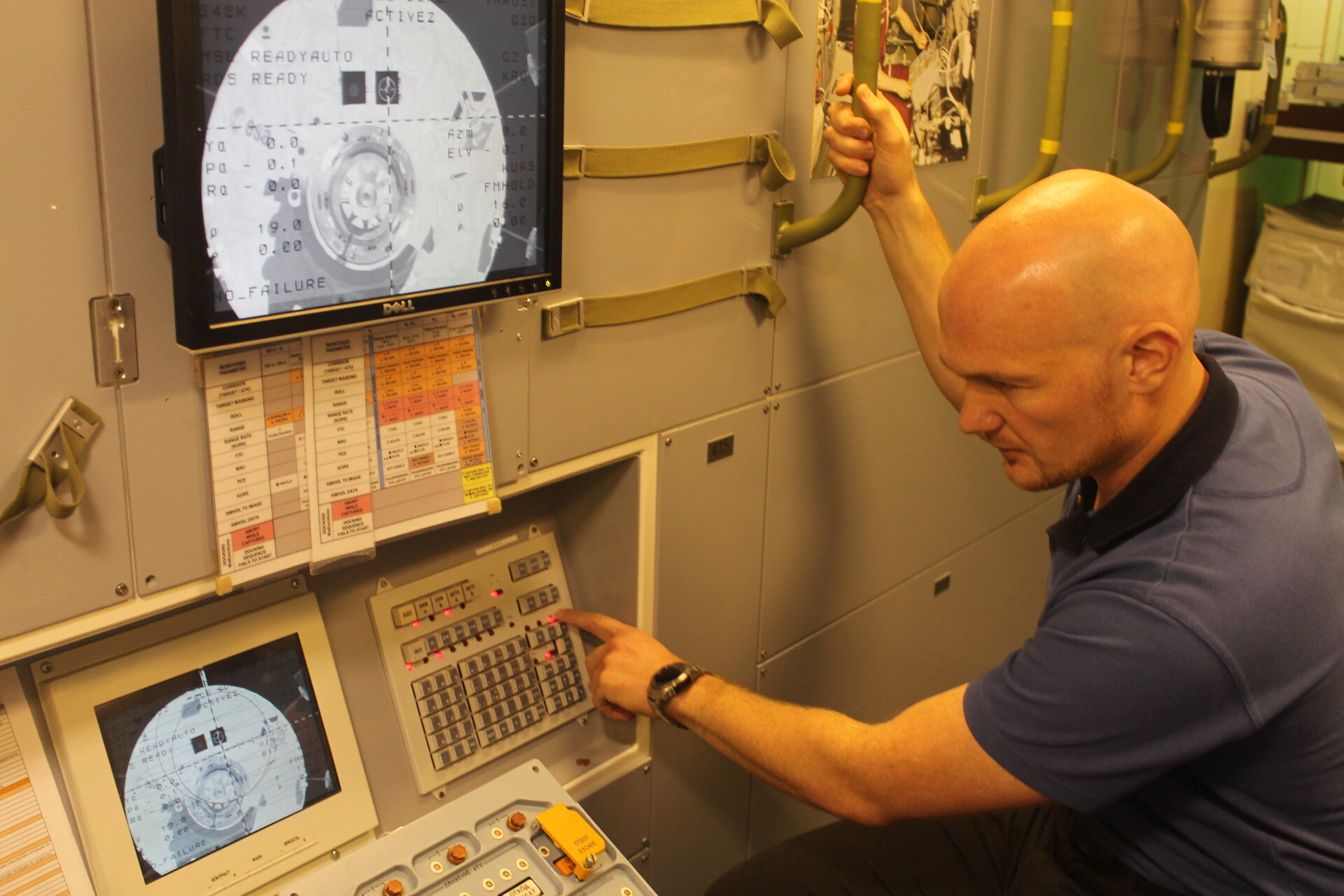 This year sees the fifth and last of ESA’s Automated Transfer Vehicles leave for the International Space Station. ATV Georges Lemaître will be launched this summer from Europe’s Spaceport in Kourou, fully loaded with supplies, fuel and oxygen for the astronauts on humankind’s orbital outpost.

ESA astronaut Alexander Gerst, who is leaving for the Space Station in May, will welcome the largest supply ship to serve the Station. Alexander finished his ATV training last month together with cosmonaut Alexander ‘Sasha’ Skvortsov, marking the last graduates of the training programme in over eight years of schooling at ESA’s European Astronaut Centre in Cologne, Germany.

“Alexander and Sasha passed with flying colours and for the trainers it was a moment of mixed emotions, a feeling of a job well done on this historic moment, combined with sadness that ATV training has come to end,” says ATV instructor Lionel Ferra.

Over 83 astronauts have been trained on the rendezvous and docking procedures, running simulation after simulation to test their reactions to many possible scenarios in a life-size mockup to add realism.

Aside from docking procedures, astronauts were taught how to make the final connections of the spacecraft with the Russian part of the Space Station, entering the vehicle and testing the atmosphere as well as unloading cargo, loading trash and finally get trained on undocking procedures. Over 1000 items typically need to be unloaded, catalogued and stored from an ATV cargo manifest. After unloading, waste from the Station needs to be secured tightly for when ATV leaves.

“When the first ATV,Jules Verne,was launched in 2008, instructors at the European Astronaut Centre had to develop a whole new training programme from scratch,” says Hans Bolender, head of ESA’s Astronaut Training Division.

“Europe had never launched a spacecraft for human spaceflight but working hand in hand with the spacecraft designers, industry and partners in Russia, the team developed a complete training programme adapted to the needs of busy astronauts to safely conduct these complex missions.”

Astronauts from all International Space Station partner agencies – Japan, Russia, USA, Canada and Europe – have trained on the supply and support ferry’s systems. The ATV training team has had a constant flow of astronauts passing their classrooms in Cologne.

“By coincidence, when Alexander and Sasha completed their docking training, another ESA astronaut, Samantha Cristoforetti, was completing her ATV undocking training with another Alexander: cosmonaut Alexander Samokutyaev,” remarks Rüdiger Seine, who is responsible for astronaut mission training. “They will be on the Space Station when ATV-5 leaves at the end of this year.”

“We have seen many amazing astronauts pass by our classroom and it is always satisfying to see a student perform well in real life,” says ATV instructor Michael Markus. “Naturally we will be watching the Alexanders, Sasha and Samantha from Earth for the last ATV operations as well.”

The astronauts will take refresher courses on the International Space Station to review procedures. Some of these courses have been released for you to try in your own web browser or tablet, and see if you have what it takes to dock ATV!