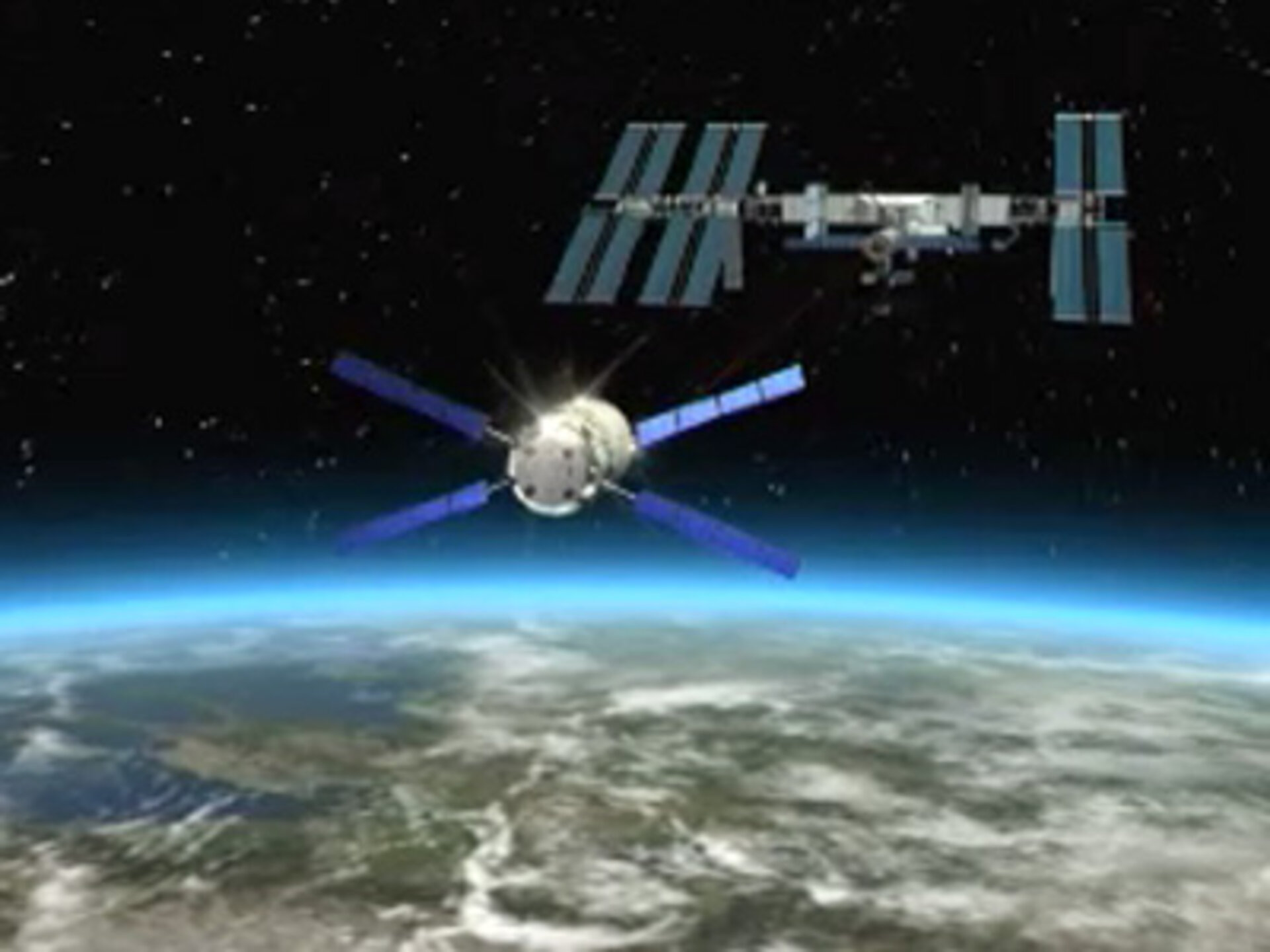 Jules Verne ATV successfully performed two boosts today, bringing the spacecraft to an altitude of 303 km – half-way between the insertion orbit reached after last Sunday's launch and the orbit of the International Space Station.

The boosts used two of the four main engines on the Automated Transfer Vehicle. Each boost lasted for approximately 2 minutes and provided a change in velocity of just over 6 m/s. Today's burns came on top of two burns conducted by mission controllers at ESA's ATV Control Centre yesterday.

"Everything is working perfectly now on both the main and redundant propulsion chains," explains John Ellwood, ESA's ATV Project Manager. "The same chain – Propulsion Configuration A - that we switched to on Monday was used to perform the two boosts yesterday and the two boosts today."

"The entire spacecraft is working beautifully and the actual degree of control during these boosts has been even better than expected," adds Ellwood. The burns on Tuesday were later determined to have performed to within 0.3% of the target.

The manoeuvres overall boosted the altitude of Jules Verne by approximately 20 km and have positioned the ATV behind and below the ISS, which is at an altitude of 340 km, with the two orbiting craft separated by a phase angle of approximately 280 degrees.

Following today's first burn at 13:20 CET, the second burn, at 14:01 CET, was commanded and monitored using ESA's own Artemis relay satellite, due to a gap in TDRS relay satellite coverage at that time, making the manoeuvre an all-European activity.

In the next two days the ATV team will try out one of the spacecraft's main safety features - the Collision Avoidance Manoeuvre, or CAM. Jules Verne ATV is equipped with a completely independent system with which ATV can be given a boost away from the Space Station if necessary during the craft's automated docking procedure.

A CAM would be executed using a completely independent control system, sensors and thrusters, managed by a separate computer which in turn uses software developed completely separately from the rest of the ATV.

"This is a manoeuvre which, if everything else has failed, really is a 'back-up of back-ups.' If things are really going wrong, it's our ultimate safety system," explains Ellwood.

A test of the CAM system is scheduled for 13 March, starting at 11:00 CET and running through an extensive series of procedures during a window extending until approximately 17:00 CET. Mission controllers will then analyse results and confirm that everything is as expected.

An actual demonstration of the Collision Avoidance Manoeuvre is scheduled for Friday, 14 March, beginning at 08:56 CET.

"The CAM demonstration is a really critical activity, as it involves turning off the spacecraft's nominal systems and actually flying the spacecraft while relying on the back-up CAM system. We will all be monitoring the spacecraft very closely on Friday," says Bob Chesson, the Head of ESA's Human Spaceflight Operations team.

The intense activity for the Jules Verne team comes soon after a successful recovery operation conducted on the night of 10 March, in which a propulsion drive chain was re-established after having been automatically shut-down soon after launch.

"We were very concerned, but Jules Verne is fine now. I don't think I've ever seen such close and strong cooperation among so many teams of people done in such an efficient way done so effectively. It was incredible to watch these guys in action," says Chesson.