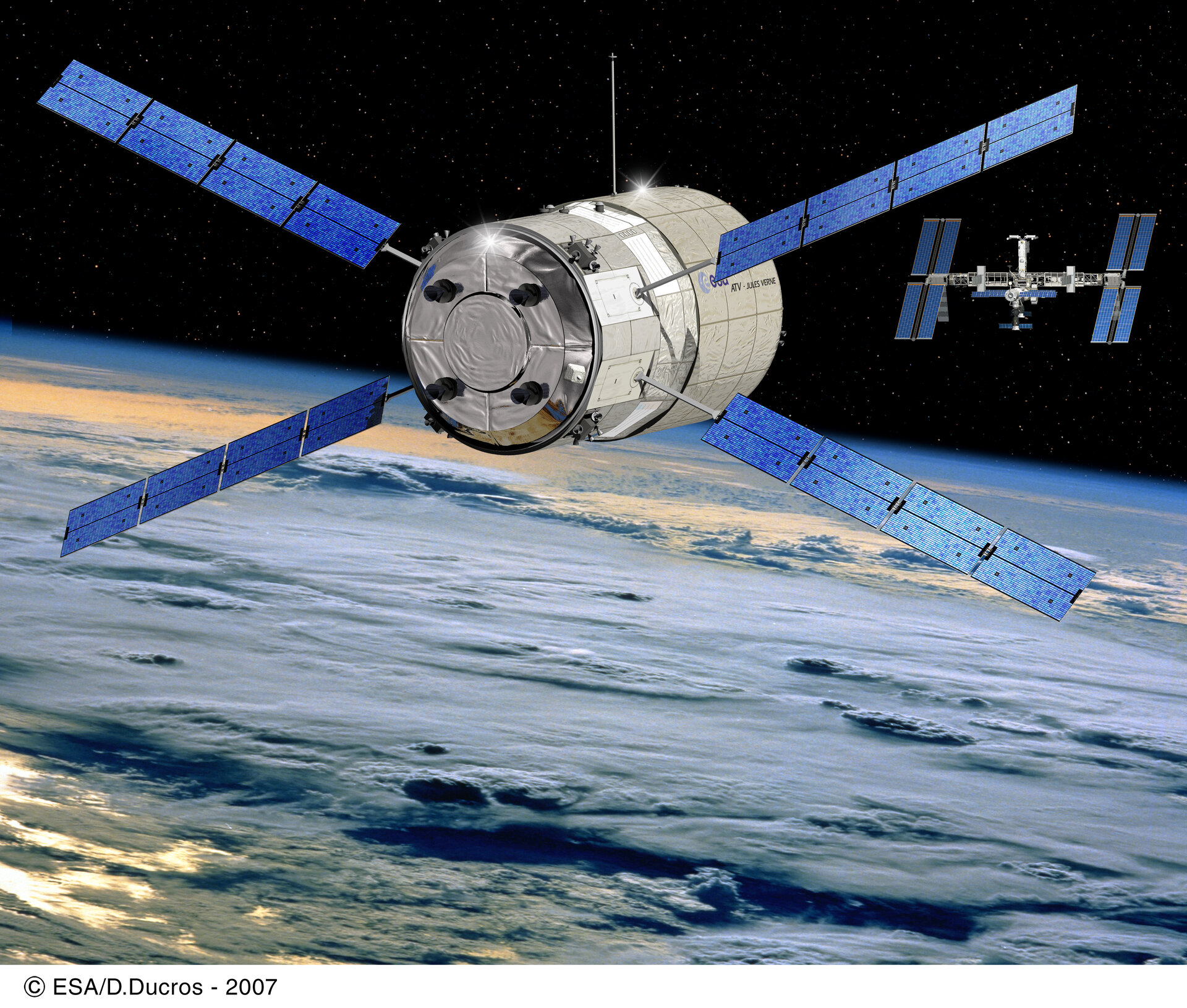 For the first time, the compatibility of the final Jules Verne Automatic Transfer Vehicle flight software has been successfully tested this month with the rest of the vast ISS flight software by international teams at the NASA Software Verification Facility (SVF) in Houston.

This ISS-level stage test, the so-called ’five-box’ test, is a new step where the ATV software is integrated into the whole ISS software ground testbed. It was conducted for 12 days over three weeks by some 43 engineers from NASA, ESA, Astrium, RSC-Energia and Boeing at the SVF Software Development and Integration Laboratory (SDIL), a few miles from NASA's Johnson Space Center. Another 30 people behind the scenes also provided support on site, in Russia and Europe.

For the ATV it is a trilateral test with the Russians playing a key role, as the Jules Verne re-supply spaceship will dock with the Russian Service Module. "The ATV Stage Integration Test was very successful and surpassed all of our expectations. This test demonstrated the integrated flight software functionality across the US segment, the Russian segment, and the ESA ATV vehicle for the timeframe in which the ATV is docked to the ISS. This success is the result of years of hard work and demonstrates the tremendous commitment of all three international partners, working together toward a common objective," said Susan Creasy, NASA ISS Avionics and Software Office Manager.

This unique SDIL facility replicates the complete ISS on-board avionics. The facility is being extended as new elements from the ISS’s international partners are attached to the Space Station. It is located at the Sonny Carter Training Facility, the site of the world's largest indoor pool, which contains a fully immersed mockup of the ISS so that astronauts can train for spacewalks.

Test and verification of all ISS flight software is done at the SDIL, a world class infrastructure which houses over 800 computers. Its purpose is to provide a full confidence in the safety and efficiency between the different elements of the ISS for mission-critical software.

The Jules Verne ATV, which is scheduled to be launched in early 2008, is known as the ‘fifth box’, in this five-box test, which includes the two Fault Tolerant Computers (FTCs) of the Russian Service Module, the two MDM computers of the US Destiny Lab and for the first time, the ATV. Similar testing is required for ESA’s Columbus module and the Japanese Kibo module. On board the ATV, the FTC, which is the main 3-unit computer, and its flight application software play the role of a pilot that navigates the ATV mission.

“This test campaign has been a full success. With our NASA and RSC-Energia partners we have been able to run according to plan many different scenarios and about 70 test cases – including many with failures created on purpose. Even if most of the procedures had already been tested in Moscow several months ago in a different test facility, now we have conducted the final confidence test under NASA authority in an ISS representative environment,” says Klaus Ludwig, ESA software manager on the ATV programme, who was in Houston for the test.

The complexity of the different software and their compatibility will play a crucial role during the attached phases such as the re-boost operation, the debris avoidance manoeuvres and the desaturation of the Space Station’s gyroscopic attitude system while the ATV is attached to the ISS. The safety of the whole 220-tonne orbital outpost depends on smooth communication across the module software of the different partners. The flight code on the US side and the Russian side contains over four million lines of code and there are about one million lines of code in the various computers of the ATV spaceship.

“This flight software functionality across the whole Space Station is crucial since no vital system is centralised in only one of the modules of the Station. Instead these systems are spread over several modules and work as one major network, such as the orientation control system”, said ESA astronaut Jean-François Clervoy, senior advisor to the ATV programme,

For those dedicated tests in the SVF, key elements of the real flight hardware, such as the ATV FTC, are connected to a high fidelity ATV simulator which reproduces the different scenarios and behaviour of the European spaceship, and a replica of the onboard data management system. Thanks to this complex infrastructure, with its interconnecting flight hardware, powerful computers and numerous pieces of software and synchronised simulation systems from all partners, it is as if the avionics bay of the ATV is actually flying in orbit with the rest of the ISS.

The facility in Houston will be continuously available to simulate on the ground, with the ATV software, any orbital scenarios of the five ATV missions planned between 2008 and 2015.

Jules Verne is the first of a series of ATVs which will bring supplies including food, water, and fuel as well as experiment equipment to the crew on board the International Space Station. A crucial element of the ISS programme, the ATV will also re-boost the Station’s orbit to overcome the effects of residual atmospheric drag. After six months the ATV will undock and be used to dispose of Station waste during a guided and controlled destructive re-entry into the atmosphere high over the Pacific Ocean.